RUSH: I’m holding here in my formerly nicotine-stained fingers a Politico story, and I’m probably gonna be the one to catch hell for pointing it out. But I don’t know how you do this. I’m looking here at a photo of many of the Democrats who conducted that childish little sit-in on the floor of the House this week to try to deny the American people their constitutional rights and the Second Amendment. And, by the way, speaking of that, Professor Dershowitz at Harvard thinks it was a bonehead move.

He thinks that it has the potential of redounding profoundly negatively. You know what I did? I went back and I looked at a little of it. I actually watched some of it, and I tried to watch it the way anybody else would watch it. You know what I saw? I saw the Wellstone memorial. I saw what I thought was a repeat of the same kind of attitudinal arrogance of the Wellstone memorial. And then I went and I specifically looked at media reaction to it. And, folks, they were having public orgasms over it. It was one of the most embarrassing displays — and that’s saying something. 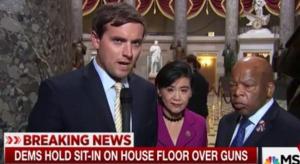 “Sitting in on Congress and pulling this kind of stunt? If Hillary Clinton’s gonna win, she gonna win because she has gravitas and because the Republicans are a bunch of buffoons, but now it’s the Democrats that look like the buffoons sitting on the House floor. This can’t help. They have to be serious. They have to show gravitas if they’re gonna win this election against Trump. Passion and anger determine votes, and passion and anger could bring Trump to the presidency.”

Now, there’s one thing about this. I have a lot of respect for Professor Dershowitz. I’ve actually met him in the halls of the old affiliate in New York back in 2 Penn Plaza next to Madison Square Garden. He was eyeing me suspiciously. He knew who I was, but he was eyeing me suspiciously. He had just finished a rant on the radio about John Sununu being untrustworthy ’cause he was Arab or some such thing. But I introduced myself to Professor Dershowitz. “Oh, I know who you are,” as he eyed me suspiciously. “I know who you are.”

Anyway, I think what Professor Dershowitz ensconced there in the ivory-colored halls of Harvard may not recall is that your average, ordinary liberal Democrat — as epitomized by your average, ordinary commenter or poster on social media — might not look at that sit-in as childish. They might look at it as brilliant tactics. I don’t know. But in his circle, clearly it was an embarrassing thing. But over here on The Politico… This is what I don’t believe.

But it’s out of focus the background. But the focus center of the photo is John Lewis. And the headline of this story… Should I…? I’m running a risk reading the headline, am I not? It’s a Politico headline. “Democrats: Gun Sit-in Just a Taste of Guerrilla Tactics to Come.” Now, not with this picture. They didn’t do that. “Guerrilla” is spelled differently than that of the beast in the Cincinnati Zoo. I understand that. “Guerrilla tactics” happen to be Third World, banana republic tactics.

But if I had done this on my website, Politico would want me gone. They would be using this as an example to suggest that I am unfit for the public airwaves. Even after Muhammad Ali died, they gave him a little grief for having used that word to describe Joe Frazier. “Democrats: Gun Sit-in Just a Taste of Guerrilla Tactics to Come — The floor rebellion could mark a turning point for the House and set a risky precedent for future fights.” I’ll tell you what the precedent that’s been set is that the C-SPAN cameras are now irrelevant.

You just need the Facebook app or the Periscope app and you can video broadcast anything that your camera on your phone can see. But I hope they do keep this up. It’s Wellstone memorial-type stuff. It really is. And Dershowitz is right: It’s going to come back and bite them.