RUSH:  Folks, I’m not just saying this to say this.  I’m not trying to be funny.  I’m not trying to be clever.  Obama is in Palo Alto.  He is addressing something called the 2016 Global Entrepreneurship Summit.  I only had a chance to listen to just a little bit of it because of course the program just resumed.  I don’t think he’s that into entrepreneurship.  I don’t think he knows —

RUSH:  I’m trying to — (laughing) he’s talking about the diversity he sees in the room. He says (paraphrasing), “I’m sure some of you are from small villages. I travel around the world, the majority of the people in the country, in this world are under 30.”  He’s talking about the different races and creeds he sees in the audience and how the entrepreneurs need tools to be successful.  And I’m hearing throughout this, you might think you’re building it, but you’re not.  I’m trying to be nice, I’m trying to be accommodating here.

What does whether you come from a small village — you know what that means, don’t you?  Some backwater.  What does that have to do with anything?  What does your skin color, where does where you’re from, what’s it have to do with anything?  How is that a factor in entrepreneurism?  “Everyone needs, everyone deserves a chance to succeed.”  Who guarantees that?  You know, the United States of America handled that long ago, Mr. President.  We don’t need lectures from you on opportunity.  That’s what this whole country was about from the get-go.

He talks about it like it hasn’t even been present, it’s always been part of prejudice and bigotry and not everybody has had that opportunity. So he’s come along and his Big Government guys are gonna mandate that everybody has an opportunity.  And how do they do that?  They do it by denying opportunity to some, and that’s exactly what socialism is.  That’s exactly what all these isms are, like Obama believes in.  You manage everything from a Central Planning location, usually where your government is, you plan everything because most people don’t have the ability to do it themselves, they won’t get the outcome you want, and so you think everybody has to have opportunity.

You start out, Obama starts out thinking this is a racist country that has been discriminating against certain people from the get-go and it takes somebody like him coming along to punish those who have had all these advantages from the get-go and to transfer those advantages to some.  So he’s not about expanding opportunity.  He wants to shift it based on his own belief that it’s not fairly distributed because the country is inherently flawed, if you will.  This is what bugs me about people like Obama.  It’s not just him.  This is how socialists look at it.  He’s the worst, and he’s the epitome of it.

But, I’m telling you, it just didn’t — now, maybe, you know, I gotta allow for the fact that I’m not entirely objective, but I’m trying to be, and it just didn’t sound to me like he was comfortable talking about entrepreneurism from the standpoint of believing in it.  ‘Cause I don’t know what those other things have to do with it.  Skin color, the size of your village.  The size of the village you come from?  Are there any villages in America?  Well, I mean, there are, not in the way he means.  The term “village” is not meant to — it means something economically.  It means something racially.

All these surface areas the way liberals look at people.  Kids get raised in a village. It’s even more than that.  Anyway, Cookie’s rolling on some of this, and maybe before the program ends I’ll get to give you some examples of what I’m talking about here.  Fox has already pulled out of it, CNN’s already pulled out of it.  They were both carrying it.  It was really a dryball kind of thing.  The reason they tuned in is because they were expecting him to react to Brexit, and he hadn’t done that by the time the program began.

Here’s Obama.  I got one sound bite here.  I actually have two.  We have one on Obama describing entrepreneurism and the other describing his reaction to Brexit.  This is this afternoon in Palo Alto on the campus of Stanford, the Global Entrepreneurship Summit.  I guess Obama’s the keynote speaker. Here’s the sound bite.

OBAMA:  You look out across this auditorium, you’re all of different backgrounds and cultures and races and religions.

OBAMA:  Some of you are from teeming cities.  Others are working in small rural villages.

OBAMA:  But you have that same spark, that same creativity energy — 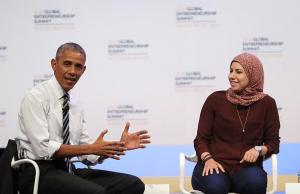 RUSH:  Well, then what the hell are you doing talking about entrepreneurism ’cause you just blew the concept sky-high.  This is fascinating.  He doesn’t know what it is.  It’s not that.  No, no.  He knows what it is.  He just doesn’t believe in it.  He doesn’t believe entrepreneurs can do what they do until he first, or the government, whatever, gives them the tools, yes, the tools that they need to create the jobs.

Talk to any entrepreneur, particularly successful ones, and they will tell you of the obstacles they had to overcome.  Some of them natural, I mean, they’re competitive.  But others, government regulation here, government obstacle over there.  But even beyond that, just Obama’s attitude about ’em.  They’re great because they’re diverse.  But they can’t do anything unless they’re given the tools.  In the twenty-first century, tools to go out and start new ventures and create jobs.

That’s not why entrepreneurs do what they do.  That’s an ancillary effect.  That’s a bonus.  To disprove me, you could go out there today find a bunch of leftist entrepreneurs, “Why did you want to invent that widget?”  “‘Cause I wanted to create jobs, man. I hear Limbaugh say that’s not why we do it.  That’s why I did it.”  Anyway, come on.  That’s not why they do it.

OBAMA:  While the UK’s relationship with the EU will change, one thing that will not change is the special relationship that exists between our two nations.  That will endure.  The EU will remain one of our indispensable partners.

RUSH:  Really, okay, fine, fine, but it was just back in April he went over to the UK, he was in Londonistan, and he told them they were gonna go to the back of the trade queue.  We played that sound bite earlier. That if they separated from the EU, that they’re gonna go back to the end of the line of our trading partners. Great Britain, the UK will go to the end of the line.  Today he said nothing will change.  Special relationship that exists between our two nations.  What special relationship?  You mean the one that caused you to send the bust of Churchill back?  Gets on my nerves sometimes.