RUSH:  So Donald Trump, what’s he doing?  He’s in Monessen, Pennsylvania, western Pennsylvania standing in front of, it looks like, an aluminum Christmas tree.  It obviously is not that, so what is that?  It looks like a bunch of different colored cans have been squished together like Oddjob squished the car in Goldfinger and it’s obviously recycled.  But he’s speaking on the prompter.  Have you been listening to it in there?  You haven’t been listening to it?  That’s right.  You’re screening calls.  You probably think I’m running a test.  No.  He’s on the prompter.  I listened to a little bit during the break here.

RUSH:  Okay.  So Trump is at the Alumisource plant in Monessen.  By the way, when you get home or you have a chance to watch this you’ll note that Trump’s hair is not orange today.  It’s actually gray.  Did you notice that in there?  Yeah, you didn’t until I pointed it out.  His hair is gray.  He’s on the prompter.

Now, the audience here includes employees of Alumisource.  The Drive-Bys are there and a few invited guests.  It’s not a typical Trump rally.  There’s gonna be one of those later today over at Ohio University, the eastern campus at Ohio University.  That’s scheduled for later today.  It’s gonna look entirely different than this.  No, I’m just telling you.  He’s on the prompter.  There’s a difference when Trump’s out there doing a rally and just improvving and doing what he does and reading the message on the prompter.

He’s not experienced reading.  The prompter’s not easy to do.  I mean, you can read it, everybody can follow the prompter, but, you know, if your eyes stay glued to the screen you’re gonna look like you’re reading, not like you’re speaking.  I tried a prompter once; I couldn’t do it.  It’s too constraining.  I just said, “Screw it.”  I went off message. I forget what it was even for.  I don’t even remember.  Long, long time ago. 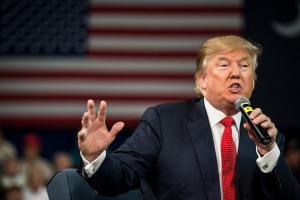 I’m not saying it’s not his message.  It is.  I mean, he’s saying the same things he always says, and you can tell at points he stops reading and starts commenting on what he just said.  It’s almost like he’s commenting on what somebody else just wrote.  He amplifies on it and he pounds it, and then he goes back to reading.  And when he’s not reading, he’s looking right at you.  When he is reading, he’s looking either to the left or to the right and not varying it.  It’s when he goes off the prompter and looks straight ahead when he’s improvising, that you can tell he’s not reading. Then he switches to the other side.

But the audience is enthusiastic.  It’s the same Trump message, how would I characterize this?  Narrowed.  What’s the word I’m looking for here?  Oh, well, I can’t think.  I’m thinking of a musical digital technic term.  Not spectrum, but what is the word I’m looking for?  I can’t think of it.  Anyway, the prompter has his message narrowed.  He’s on a narrower road and he’s not taking any off ramps.  You know, he’s sticking right to it, which is I’m sure what the handlers want here.

Now, don’t misunderstand, he’s better reading the prompter than Hillary. Don’t anybody confuse me.  I’m just observing that it’s different from a Trump rally.  That’s all.  See, now he’s not on the prompter. Now he’s ad-libbing. His hands are moving, he’s gyrating.  Now he’s back on the prompter.  It’s stupid of me to talk about this ’cause you know what’s happening. People are now rushing to try to turn on the TV to see what I’m describing.  Don’t do that, folks.  Wait ’til the show is over, then go find it.  It’s gonna be there.