RUSH: I still have a lot of detail on Trump and Clinton and polling data.  The Quinnipiac poll is out, and there’s an NBC/Wall Street Journal poll, and they’re not telling you the meat in that poll.  I’m telling you: Aside from Hillary’s lead in the NBC/Wall Street Journal poll, that’s the only thing in that poll that is decent or good for her.  Everything else is a near-disaster.  F. Chuck Todd of NBC News realizes it and made reference to it.

There shouldn’t be any doubt about Hillary Clinton.  But then, of course, Bernie Sanders exposed quite a lot of it.  And I’m telling you this: The Democrats… Do not doubt me on this. They are not happy that Elizabeth Warren generates more excitement than Hillary does.  They don’t… You know they want Elizabeth Warren. They don’t want her on the VP side. They don’t want to waste her that way, and they don’t want somebody on the ticket that’s gonna be more exciting, draw bigger crowds, and overshadow Hillary to boot.

So, you know, all this polling data out there? The way it’s being analyzed for you, it’s designed to depress you again and make you think it’s already over like this Nate Silver story. But it isn’t, folks.  Not by a long shot.

RUSH: Let’s look at some of the polling data here.  The big poll that everybody’s talking about today is the Quinnipiac poll, which shows that Trump and Clinton are running neck and neck.  Now, this is at variance with the ABC poll which shows Hillary up 11.  And then there’s the NBC/Wall Street Journal poll, which shows Hillary up five, I think, something like that.  However, that poll, the NBC/Wall Street Journal poll, that’s the only good news for Hillary in that poll.

When you get into the internals of that poll, it is devastating for Mrs. Clinton.  And it gives rise to the question, how can she be leading in this poll, given the internals?  Now, I will explain all of this as the program unfolds.  I’m looking here, grab sound bite number 13.  I just want you to hear an illustration of what I’m talking about.

This is last night, Bloomberg, With All Due Respect show with Mark Halperin and John Heilemann.  They had F. Chuck Todd from NBC in as their guest because of NBC/Wall Street Journal poll.  So Mark Halperin said to Chuck Todd said, “Okay, your poll, Secretary Clinton’s leading, but she is behind Trump on a number of traits, including who is better on the economy.”

RUSH:  Yeah, yeah, there isn’t.  He’s exactly right.  And, see, this cuts against Hillary in two ways.  Aside from the substance there, Hillary Clinton, especially against Trump, she’s supposed to look like Mother Teresa.  She is supposed to look like a goddess, in their view. In the Democrat Party view, Donald Trump is the epitome of the worst human being there is on the planet.  He epitomizes everything they hate about humanity, from his hair on down to his attitude, to the fact that he does improvisational appearances, to the fact that his voters and supporters are stupid.

They think, by comparison, Hillary Clinton should be walking away with this.  That’s why they’re so reassured when old Nate Silver comes out and tells ’em that Hillary’s got a 79% of being elected.  They breathe a sigh of relief.  But the Quinnipiac poll is the same thing.  The Quinnipiac poll shows them in a dead heat, but it also shows that Hillary, she’s not loved.  She’s not respected.  And it’s the same thing in the NBC poll.  The Democrats are devastated privately by this, because the only thing that will make them comfortable is a cakewalk, and they thought they had one.  They thought they had a cakewalk here.

They had a perfect Republican opponent in Trump that nobody in their right mind would ever, at the end of the day, really vote for the guy, and especially if they had Hillary Clinton. Remember, their view of Hillary is about a thousand gazillion percent higher than ours.  They think she is the epitome of greatness, achievement, accomplishment, first female president, historic nature of the campaign.  Wife of Bill, of course, gives her a certain amount of credibility and so forth.  And these polling numbers are devastating for her.  Forget that Trump’s even in them.  It wouldn’t matter.  It’s really, really bad news for her in terms of respect, likability, trust.  She’s even addressing the likability problems that she has outs on the stump.

Dealing with the economy:  Trump 47, Hillary 37.  Not only is Trump winning in all these internal categories, it isn’t close.  And, of course, the Democrats also think they have all the economics.  Remember, they’re the ones that think we’re in a great recovery.  They’re the ones that think Obama has helped us rebound from the horrible financial crisis and the rotten eight years of George W. Bush.  And Hillary Clinton, she’s got roots back to Bill Clinton, which was the definition of a roaring economy in the nineties, they think. 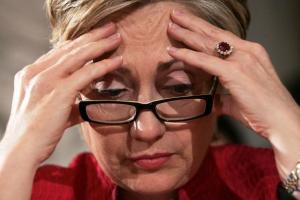 They think Trump is somebody with no redeeming qualities at all.  And they think everybody agrees with them and thus Hillary ought to just be smoking Trump in all these internal categories.  And she’s not even close.  Now we go to the Quinnipiac poll, also known as the Q poll.  Clinton 42, Trump 40, too close to call.  When third-party candidates are added to the Q poll, Clinton 39, Trump 37.  That bothers them.  Both sides of that bother them.  They don’t understand being in a dead heat with the guy.  They don’t understand Hillary at only 42%?

But the internals of this poll and what everybody is talking about in the Quinnipiac poll is how majorities of respondents say neither of these two is worth much.  The majority of respondents of the Quinnipiac poll say that neither Trump nor Hillary is the greatest of shakes, and they’re not excited and they don’t think these are the best representatives of whatever.  They’re perfectly willing to accept that about Trump, but the fact that Hillary is seen in the same way — remember, now, this was gonna be a coronation.

The Clintons are rock stars in the Democrat Party.  This is like George Clooney being at 38%.  It just wouldn’t compute.  So these polls that are out today, the ABC News with Hillary Clinton up 11 has pretty much been forgotten.  And the one that preceded it, reported by Bloomberg, had her at 10 points.  All those have been forgotten because these are new, these are recent, and there’s just nothing much to brag about in either of these polls, and there’s quite a lot to be concerned about.