RUSH: There are a couple of stories here that, in the old days we would do these and have a great yuk and a great laugh about them, thinking everybody else would also find them funny and laughable, not realizing that a decent size of the population would be identifying with the subject matter and angered by it or in support of it.

This is about a kid who got an internship at a company, he shows up and he and his fellow interns decide that they don’t like the dress code at this company. So they demand a change in the dress code because they’re spoiled rotten little children and that’s all they’ve had to do to get whatever they want growing up, demand and then cry, bellyache, caterwaul, and make a general nuisance.  We must not harm their self-esteem. We can’t say no to little Johnny, so whatever little Johnny wants or little Susie wants, they’ve ended up getting.

Now, as an intern anywhere, it would never even occur to me to issue a demand about anything.  I wouldn’t want to jeopardize the opportunity I had just been given, even in an internship.  I worked at the radio station in my hometown, I went as often as I could without being paid for a year.  The last thing I was gonna do was tell ’em what they needed to change.  But that was then and this is now.

“College kids have a pretty easy time getting their way on campus. Just make enough of a stink and the universities cave,” and you know it to be true, folks. “Unfortunately, these students eventually reach a little place called the real world, where things aren’t so forgiving. One recently wrote in to an advice columnist because the antics he’d gotten away with elsewhere suddenly didn’t work.” We’ll call this kid Junior. “Junior was at his internship, and he wanted the company to have a more lax dress code.” He didn’t like that they had to show up in a tie and maybe a jacket.  He wanted T-shirts, cutoffs.  He wanted to be able to dress the way he wanted to dress.

In addition, he and his fellow interns noticed one of the regular staff wearing shoes that were not precisely in line with the standard dress code, and he thought, “Well, that’s not right.  They can get away with violating the dress code.  His shoes didn’t quite match.”

“The next day, all of us who signed the petition were called into a meeting where we thought our proposal would be discussed. Instead, we were informed that due to our ‘unprofessional’ behavior, we were being let go from our internships. We were told to hand in our ID badges and to gather our things and leave the property ASAP.

“We were shocked. The proposal was written professionally like examples I have learned about in school, and our arguments were thought out and well-reasoned. We weren’t even given a chance to discuss it. The worst part is that just before the meeting ended, one of the managers told us that the worker who was allowed to disobey the dress code was a former soldier who lost her leg and was therefore given permission to wear whatever kind of shoes she could walk in. You can’t even tell, and if we had known about this we would have factored it into our argument.”

“The reality is that colleges — the educational institutions that are theoretically supposed to prepare these kids for the real world — don’t.”  They do all of these students a disservice by cowering to every silly, childish demand that is made. All this safe space stuff, micro-aggression stuff, and then when these students hit the real world, you know, it’s like, “Pow!”  Except not everywhere.  There are some places in the real world where they would have been successful.  Probably a solar firm with relationship to Obama or some other government sponsored waste of time and money. 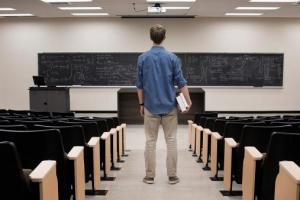 And, by the way, if that offends you, I’m sorry.  I know a lot of you, “We’re gonna do a petition. It’s the way we’re showing our civil disobedience.  It’s the way we’re showing our unity.”  No, it isn’t.  You’re bullies.  It’s the way you’re trying to dictate.  You think there’s power in numbers.  Make no mistake about that, folks, a petition — I realize it’s offending many of you because many of you have probably signed a lot of them, but they are an attempt to dictate, in this case, how the company’s dress code should work.

After all, where’d these kids learn to do this?  They learned it at home.  They learned it in school.  All they had to do was show force in numbers and act like spoiled little kids and they got what they wanted.  They learned to pressure authority this way in college, right?  What Junior and his fellow interns found out, and I don’t even know if they learned this lesson, but you know what they found out?

So the company was doing them a favor offering them an internship, and they basically just spit all over it, and you wonder if they’ve learned the lesson or if they’re running around thinking that the world’s an unfair place, this is an example of how unfair it is, how oppressive it is.  This is why we need a big government to control people. Why you need a big government to make these corporations do what we want them to do.  Little liberals, even though they may not have known it, in action.

They were serving brownies on the last day of school, so the kid’s talking about brownies.  And some other student says, “That’s a racist comment.  He’s talking about fellow classmates as brownies,” and they call the cops, and the cops showed up.

“The boy’s father was contacted by Collingswood police later in the day. Police said the incident had been referred to the New Jersey Division of Child Protection and Permanency. The student stayed home for his last day of third grade. Dos Santos said that her son was ‘traumatized,’ and that she hopes to send him to a different Collingswood public school in the fall.

“And she wants an apology. She said she graduated from Collingswood High School and has two other children, a 21-year-old who also went through Collingswood schools, and a 3-year-old. Her husband, the third grader’s father, is Brazilian, dos Santos said.”  So he couldn’t possibly be racist, right?  “The incident, which has sparked outrage among some parents, was one of several in the last month when Collingswood police have been called to look into school incidents that parents think hardly merit criminal investigation.”

Who in their right mind would think this would ever merit criminal investigation?  But it did.  They were serving brownies.  A kid talks about the brownies, another kid, “That’s racist.”  And they called the cops.  That’s worse than in Port St. Lucie when they ran out of McNuggets at McDonald’s some babe called 911 hoping to reach Obama to complain about it.