RUSH: The labor secretary, former labor secretary, Robert B. Reichhhh, claims that the protesters in Berkeley were actually hired by Breitbart. That it was a Breitbart false flag. (laughing) They weren’t really leftists that were doing this. Go to the audio sound bites. Last night on CNN Tonight, Don Lemon speaking with the former Secretary of Labor for Clinton, said, “The violence we saw at Berkeley, it plays right into the hands of the right-wing white supremacists, you know, the people at Breitbart. What do you think about that, Mr. Secretary?”

REICH: It absolutely does, Don. And I want to be very, very clear. I was there for part of last night, and I know what I saw!

REICH: — and those people were not Berkeley students!

REICH: Those were outsiders, agitators. Uh, they… I’ve never seen them before. Uh, for… You know, there’s rumors that they actually were right wingers.

REICH: They were part of a kind of a group that were organized —

REICH: — and ready to create the kind of tumult and danger you saw that forced the police to cancel the event.

RUSH: Ha! Ha! Ha! Haaaaaaa! Do you hear how enthusiastic he is? (laughing) Do you know any right-wingers capable of this kind of behavior? (laughing) I mean, go to Ferguson, go to Baltimore, go to San Bernardino, go to Watts. Take any protest, any violence. Go to Oakland any time you want. Any time there is violent protests, it’s always left wingers bought and paid for by the Hillary campaign, the Democrat Party, or George Soros, and never once have the Democrats ever condemned them, ’cause they’re proud of them.

You know this is the kind of instability and chaos that they want because they know it’s gonna be blamed on Trump. They know that all of this… The Drive-Bys and everybody in education’s gonna point fingers at Trump. Peggy Noonan’s done it. I’ve got it… (That’s one of the things that’s been superseded by other stuff in the news.) Oh, and they’ve discovered a new unemployment rate! (chuckling) Wait ’til you hear this. They’ve discovered the U-6 unemployment rate at CNBC. Ah, this is just… It’s too juicy. And here’s now the former Clinton labor secretary! 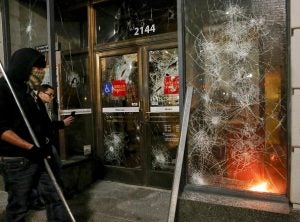 They don’t want anybody to think that these protesters in Berkeley that blew that place up were Democrats. They don’t want ’em to think it’s leftist students. Why do they not want to embrace them, encourage them, and claim credit? What is there to gain by blaming this on Breitbart? Don Lemon, now thoroughly intrigued, said, “You think this is a strategy by Milo Yiannopoulos or right wingers? Did they put this on in an effort to show that there’s no free speech on a college campus like Berkeley? The right wingers did this?”

REICH: You know, I… Again, I saw these people. They all looked very — almost paramilitary! Uh, they were not from the campus.

REICH: Again I don’t want to say factually, but I’ve heard that there was some relationship there between these people and, uh, the right wing.

REICH: And, uh, the right-wing movement that is — is affiliated with Breitbart News.

RUSH: (cracking up) These people are losing their minds. “I was there! I was there! They were all dressed in black! I’ve not seen this before.” It’s called… There’s a name for these people. They’re Black Rock or something, and they are well-known leftists associated with George Soros. They come in in all black and they hide their faces. Many of them are not students. That’s the point. They are bought and paid for! (laughing) But here is Reich (paraphrased), “I was there! I saw them! These were right wingers, sure as I’m sitting here with you, Don!” (cracking up)

I thought he was checking student IDs or whatever. But no, they weren’t students. That’s the point. Here’s something else about this if I can try to regain my composure. (laughing) I don’t know. I just hear this little guy get so juiced, folks. He gets so excited talking about this conspiracy. (impression) “I really wouldn’t bet against it, Don! I…” (laughing) I heard that the president of the university — I’m still tracking this down — actually had campus cops and Berkeley cops stand down while this happened, that there was, in certain quarters, a desire for this to happen.

RUSH: Edmund in Lexington, Illinois. Great to have you, sir. How you doing?

CALLER: Hi, Rush. Robert Reich, he violated three rules that I know of when you report on a riot. Number one rule is, you don’t say your students weren’t there, ’cause you don’t know, ’cause they were all wearing a mask. That’s number one. This is becoming fake news. Number two, Rush, he made an outrageous claim which people like you and Donald Trump would call braggadocio or something like that. He must know all 38,000 students at that university.

CALLER: He knows ’em and even if they’re wearing a mask.

CALLER: Rush, the third law theta violated was — and I don’t mean this in any disrespectful way, but somebody who’s four foot eight can’t see what the hell’s going on in a riot. Those are the three rules that I think are violated, and they’re very important.

RUSH: I’m glad you called there, Edmund. Ladies and gentlemen, he’s referring to a couple of sound bites in the first hour of the program, that’s how long poor Edmund’s been on hold here. It’s one of the dangers when people start talking about things that happen hours ago, you may not know what he’s talking about. I’ll set the table for you.

Robert Reich, two sound bites, claimed that he was at Berkeley and these weren’t students. He knows the students at Berkeley and it’s not who they were. These were Breitbart right wingers that were hired to blow up Berkeley. And so Edmund is offering here his three different laws that Reich violated in making these claims. And his third one is, not to be disrespectful, but Labor Secretary Reich is 4.8, four foot eight inches. And Edmund was making the point that when you’re four foot eight, you can’t see what’s going on in a riot.

And if you think that’s making fun of Labor Secretary Reichhhh, you should know that Bill Clinton was the first to do it. Standing next to a giant dollhouse at a Christmas display, he said (imitating Clinton), “Hey, you know what, Labor Secretary Reich could live in that little thing, don’t you know.”

RUSH: Investor’s Business Daily has just published a — remember those airport protests after the Trump executive order? I don’t need Investor’s Business Daily ’cause I already theorized this. Those protests were just sitting around waiting to go for an event. When the Trump executive order on vetting and the so-called Muslim ban, which it wasn’t, when it was put into place on Friday remember all those protests at the airports, at JFK and LAX and was made to look like exactly what the left does in cooperation with the media. That a whole bunch of people minding their own business just outraged at what Trump did and they left their homes and they joined the protest march out of principle, they were so opposed to Trump, so opposed to Trump’s policy. And in fact it was not the case at all.

They were bought and paid for protesters sitting around waiting for go orders, waiting for any event to get off the couch, leave the house, and go out and officially protest. Investor’s Business Daily has found the proof, has found the evidence. As I say, I didn’t need any. I know the left. I knew these protests were not organic. I knew they were not generic. I knew they didn’t just spring out of the earth. They were bought, they were paid for, they were organized, the signs were handmade and printed and so forth, and they were just waiting for the first thing Trump did that they thought would justify that kind of response.

The point is, much of this opposition to Trump that you’re seeing is fake. Like fake news, it’s fake protests, in the sense that if it hadn’t been planned and if it hadn’t been the subject of a go order and if people weren’t being paid, it wouldn’t be happening. Same thing at Berkeley. Every bit of that staged, planned, and probably even choreographed, including whether or not the police were going to put up much of a fight. Only one arrest.

But this is what the left does, folks. Everything they do is fake. Everything is made to look natural and organic and like the anger and emotion is legitimate and directly tied to irrational behavior of Donald Trump or any other conservative Republican. In fact, it’s none of those things. It is entirely fake and the help provided by the media making it look real is the icing on the cake.