RUSH: Julie in Temecula, California. Great to have you. How are you?

CALLER: Hi! Thank you for having me. Okay. I’ll try and make this brief. But the Democrats, of course, are thrilled that Flynn is out. He is extremely knowledgeable, especially about ISIS, and President Obama wanted him out. And so this is such a bad deal that he’s out. But this is what I’m thinking. I’m thinking that can Trump and Pence have a heart-to-heart with him on the trust issue, because I think that, if they do this, they could probably have more trust between the three of them and everyone else if he does that.

And the Democrats… I heard one media source saying that Trump caved in like a house of cards and they were laughing about it — so they got out the most feared person. They were so fearful of Flynn and what he knows and what he knows about ISIS and how to defeat them and all kinds of levels — I mean, you know more than I, and obviously Trump does — of the levels of knowledge and wisdom that Flynn brings. And if the media comes back, if he does this and the media comes back and just has a field day on him, “Can’t even make up his mind?” or, “What’s wrong with this guy?” anything they throw at him, who cares? This is for our country, and I know Trump wants good people, and he is a good person. He would be a good asset.

RUSH: Do you know Flynn personally?

CALLER: I think they should have a heart to heart on that trust issue.

RUSH: Do you know Flynn personally?

CALLER: No, I don’t. I’m just… I live in Temecula, California, and I love Trump, and I love what he does, and I think he wants… I truly believe that Trump cares about our country, and I’ve seen him in his humility and knows that he wants to be here for all of this.

RUSH: No. I don’t disagree with that. It’s you’re making the case for Flynn as though you or somebody knows Flynn.

CALLER: Oh, no, no. Trump has always, his whole life, from what I can see, surrounds him with the best. And I think that he should, you know —

RUSH: Well, let me stop you here because first thing I want to share with you and I don’t think your scenario is ever gonna happen, officially. They will never… I mean, they might have a heart to heart with Flynn, but there will never be an official welcoming him back into any official capacity in the administration. That isn’t gonna happen. It isn’t… It wouldn’t be necessary. And, by the way, can’t do it now, after you have uttered the reason why you got rid of him. “Oh, just couldn’t trust him.” 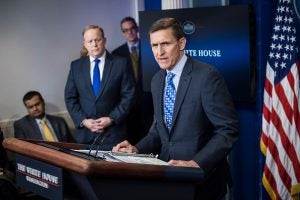 But, Julie, let me tell you. There’s a lot about this. I said at the end of the program yesterday, ’cause I got an email after engaging in effusive praise for Trump in the press conference. I got an email. “Is there anything that you didn’t like, is there anything that bothers you about it?” I said, “Yeah. This whole Flynn situation. Something about it doesn’t sit right.” And here, let me try to explain. I’ll practice my brevity here in advance of Fox News Sunday. Everything we know suggests Flynn didn’t do anything.

CNN has a story the FBI’s not even gonna prosecute him, so he didn’t talk about sanctions. He just listened while the Soviet ambassador did, but he didn’t commit to anything. He did tell Pence something that wasn’t true, and he sent Pence out saying the same things on national TV that were not true. That is curious. But, on the other side of this, Flynn didn’t do anything. He did not. He did not do anything wrong. So why…? How did this blow up to be such a big deal? And there’s more to it than just, “Well, the Democrats, they get to set the narrative.

“The media gets to set the narrative, and the narrative is that Trump and Flynn were secretly negotiating with the Russians and who knows whatever trying to undermine Obama’s sanctions and so forth.” That wasn’t true. But there clearly was something that wasn’t going well. There something wasn’t sitting right. And the decision was made somewhere within the administration to let Flynn go, and they settled on, “Well, he just… We need trust.”

All during that presser yesterday President Trump did nothing but sing Flynn’s praises, how much he likes him, how much he respects him, how qualified he was. It didn’t sound like the characterizations of somebody you’ve just had to dismiss from your administration. So… I don’t know enough to even speculate possibilities. Could there be power struggles? Was there somebody in there that wants Flynn’s job, somebody in there close to Trump that just didn’t like Flynn?

Is there somebody in there that got to him and said, “Flynn’s dangerous. He’s a walking powder keg. You need to limit the damage now”? I don’t know. But none of what the allegations were have happened. He didn’t talk to the Russians, didn’t talk about sanctions. He listened while the Russian ambassador did. No charges. FBI’s heard the transcript of the call; nothing went wrong. The only thing that happened was he told Pence that he hadn’t done any of that, when he in fact had.