Attacks on Trump Are Backfiring — and Democrats Know It

RUSH: Salena Zito is back after having made another trip into Pennsylvania, where she has once again scouted Trump voters, and she reports that people are rooting for Trump more than ever. You know there’s surveys out there, polling data out there that Trump has an approval number higher than Congress and the media combined. Forget what Trump’s approval number is in the Drive-Bys. By comparison to Obama, of course, it’s dismal, and the Drive-Bys use it to say that the country is embarrassed of Trump, and it’s horrible and rotten. 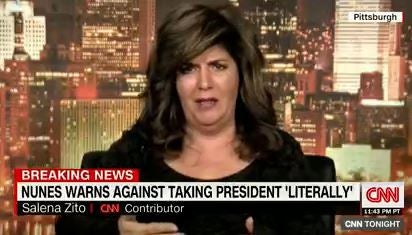 Selena Zito reported in Pennsylvania: “In This Part of the US, People Are Rooting for Trump More Than Ever.” Here’s some numbers for you. This is why the Republican Party is making one of the biggest mistakes it’s made in my lifetime. “The Republican Party has gained 100,000 new registered voters in Pennsylvania, knocking the Democrats’ lead of 913,017 down to 808,974. That number includes 31,000 new registered Republicans in Philadelphia. Yes, Philadelphia.

“In the past few months, a CNN producer and a Scandal star have called people who voted for Trump ‘stupid.’ Their contempt has registered with voters in this part of the country, and it has only served to escalate their commitment to the president.” Well, it was, what was this guy’s name, Molina, the guy on Scandal who plays the attorney general. I forget his name. But he’s out there and, of course, the CNN producer, well, hell everybody at CNN. Hillary calls ’em deplorables. These other people are calling them idiots. How could you be so stupid to vote for Trump?

And the Trump voters hear this stuff and it doesn’t shame them, it doesn’t embarrass them, because they don’t care about appealing to the media. It just cements them even deeper with Trump. Here’s another pull quote. “Despite his flaws, Trump voters are waving the flag for their underdog candidate in a show of defiance. Many don’t think he is on the ropes, and they believe he will eventually get results.”

There’s a man profiled in the story named Moyer, and it then says: “Customers are still coming into Moyer’s shop, requesting pro-Trump signs for the first time, wanting to show their support.” In other words, all of this savage attack on Trump, in Trump country, in Pennsylvania and Wisconsin, some of these other formerly blue states, it is backfiring on the Democrats; they don’t even know it yet, although I think they do, because of this. “Nancy Pelosi: The Voters ‘Don’t Want to Hear Us Criticizing the President.” That is a quote.

“The voters don’t want to hear us criticizing the president. This was a choice; they made a decision. And to criticize the president personally is to disrespect their judgment. So I say to my members, ‘This is about what we’re going to do.'”