RUSH: Now, the ultimate aim of all this is to shut people up. See, the reaction they want me to have is, “Oh, my God, oh, my God, I better stop talking. Look what they’re doing. They’re making up what I’m saying, it’s really bad, it’s hurting my reputation.” The idea is suppression of speech. That’s the objective of these people in the groupthink and people on the left or what have you.

Want to hear some fun sound bites? I mean, here we have another oracle of climate science, the actress Jennifer Lawrence. Last Wednesday in the U.K. on Channel 4 news she was doing an interview with social affairs editor Jackie Long about the new movie Mother. Question: “When the director was asked about the film, why it was so dark, he said, ‘Well, it’s a mad time to be alive.’ And there is certainly an end of days feeling about the movie. And for many people, in America who would say, perhaps it’s truer there at the moment than anywhere else.” Because of Trump. Here’s how noted climate science oracle Jennifer Lawrence answered that. 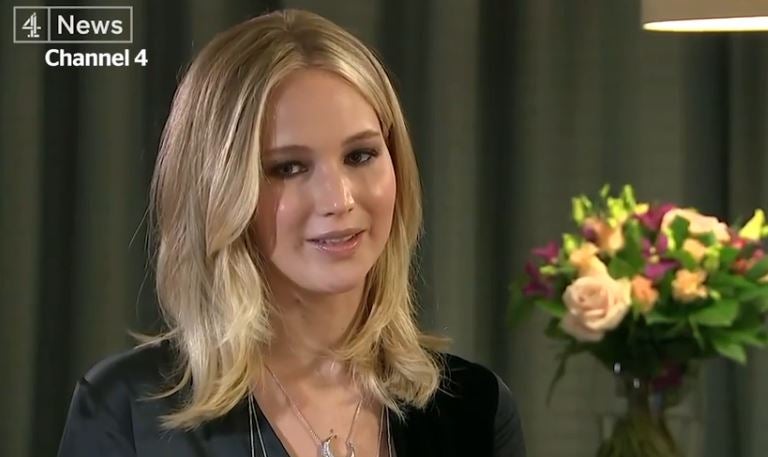 LAWRENCE: It’s scary. Um, you know, it’s this new language that’s forming, I don’t even recognize it. It’s also scary to know that it’s been proven through science that climate change is due to human activity —

LAWRENCE: — and we continue to ignore it and the only voice that we really have is through voting. And we voted and it was really startling. I mean, you’re watching these hurricanes now and it’s really hard, especially while promoting this movie, not to feel Mother Nature’s rage around.

RUSH: She went on to say that Mother Nature did this hurricane to get back at America for voting for Donald Trump. She really said it. And she’s not trying to be funny. This is what they tell themselves. I don’t know that this is really what she thinks. I can’t believe that she’s that dense, but this is what they tell themselves to comfort themselves. They still can’t get over that Hillary lost. I mean, that’s the underlying foundation that’s causing all the rest of the insanity. And so anything that makes ’em feel better. So hurricane, yeah, Mother Nature, Mother Nature’s getting back at America for what happened, for electing Donald Trump.

And of course nobody comes along and says, “Jennifer, are you sure about that?” Nobody castigates her because she’s on the right side of the groupthink. But she believes we continue to ignore it, it’s been proven through science, climate change due to human activity. No, it has not been proven. It cannot be proven, in fact. We don’t have enough data for all the years before humanity. We don’t have enough data for all the years before modern equipment to record the temperature. We don’t have the evidence to make a statement like this. This is why it’s become a religious religion. NBC’s Today Show, Savannah Guthrie speaking with Florida Senator Ben Nelson about the impact of Hurricane Irma, and something happened because it didn’t turn out to be quite as bad as some people said it was gonna be. 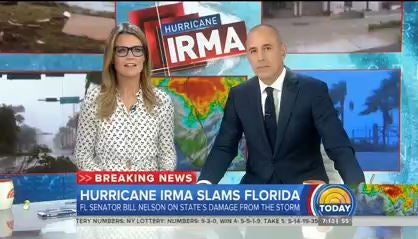 GUTHRIE: There is the sense of relief at least from the correspondents we’re hearing from, some of the mayors we’re talking to, saying this could have been much, much worse. What’s your perspective on it?

NELSON: If it had stayed in the Gulf, all of that warm water would have killed it and it would have been much stronger. Much unexpected and Mother Nature has a mind of her own.

RUSH: Right, Mother Nature, mind of her. No, no, we control Mother Nature, Senator with climate change. We’re controlling Mother Nature. So he says, yeah, if it had stayed out in the Gulf it would have been stronger, Savannah. Is that what we want, so the forecasters are right? Listen to Chad Myers on CNN thanking Cuba for us.

MYERS: We knew that this was the biggest storm America may ever have to encounter. 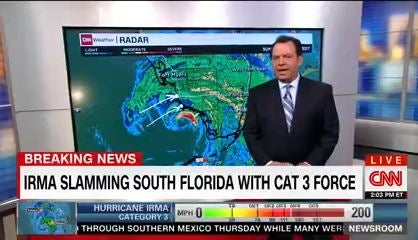 MYERS: What happened overnight was a godsend and it was a blessing for America and not so much for Cuba, because the storm ran over the northern coast of Cuba, losing significant intensity in the process. As the storm exited Cuba overnight and this morning, it did not have an eye wall that could recover and become a stronger storm. It never did get back anywhere near that Category 5. Without that brush with Cuba overnight, this would be a completely different story.

RUSH: Fine. Scientifically that’s accurate. I mean, hurricanes over land do lose intensity, but I was watching all day yesterday, I kept switching back and I kept hearing how bad it was. I didn’t hear anything about weakening. I kept hearing how intense it was, this is the worst, this is the big one. Now after the fact it wasn’t so bad because the interaction with Cuba weakened it. It went over the Cuban keys, which is a little island range that parallels the northern Cuban coast. I don’t think it actually impacted the Cuban mainland, but it still hit as a Category 4, they’re still trumpeting Category 4, but it wasn’t the strongest that’s hit. There’s so much disinformation on this stuff it’s impossible for people to keep up with it.