RUSH: I almost forgot to mention this. I was given a screening yesterday afternoon of the new movie American Assassin, which is based on the novel written by Vince Flynn who became a very, very close and dear friend. He and his wife, Lysa, are from Minneapolis. I didn’t know who Vince Flynn was ’til I read his first Mitch Rapp novel, and I remember raving about it here. Vince was a great guy. He spent a lot of time (I didn’t even know it) trying to find a way to get to me to thank me, and I wasn’t aware of that.

I was out in Los Angeles one day. I had to come out to do the radio show and my buddies over at 24 arranged a set visit. I went by there for two hours. They had this great presentation. I watched a little bit of the filming of 24 with Kiefer Sutherland — the original Kiefer Sutherland edition — and they had hired Vince as a consultant. He was there, and that’s where I first met him, and he looks just like what you would think a Special Ops stud would look like. And he died in his forties of prostate cancer and complications. And it was so sad.

There’s no pain with prostate cancer per se, and so there wasn’t any. He was in his forties. I mean, PSA tests, they tell you don’t worry about that ’til you’re 50 or 60. And he started to experience some pain, and he went and checked it out. They tried some revolutionary treatments, and he lived for a while, but he was just gone way too soon. He’s written a lot of books, and they’d tried to get one made in a movie for seven years, and this is it. They were gonna screen it for me Thursday last week in Palm Beach, and we had to scramble and get out of there.

So they made it available to us yesterday afternoon at a theater here called the iPic on Wilshire Boulevard. Now, I haven’t been in a theater in 17 years only because I need closed-captioning to be able to understand what’s being said. By the time you add all the other noise and soundtrack, people chomping popcorn or whatever, it’s impossible for me to get all the dialogue. So they had this little doodad that plugs in at the seat that was a little four-inch LED screen that had the closed-captioning. So I’m watching this and the movie out of corner of my eye, but I had never been in a theater like that.

I’d read about them. I’d read that people go and have dinner at the theater now because it’s highly competitive, but I’d not seen this in operation. I walked in; there’s the bar. Now the last time I was in a movie, that was illegal. You couldn’t have a bar in there, couldn’t serve adult beverages. And then they had waiters. And the seats were recliners, and they had tables, and there’s a full menu. I mean, you could order a $925 bottle of cabernet at the iPic Theater on Wilshire! I’m just sitting there marveling at it and I’m thinking I should have gone to one of these.

Even if I can’t hear the movie, I should have gone to one of these to experience what this is. I don’t mean to sound dazzled, but I was. It was the first time I’d seen it. I quickly caught on, ’cause, you know, I’m Mr. High-tech. So none of this stuff intimidated me. I was just blown away by actually having seen it. Then they said, “If you need anything during the movie, just hit that blue button.” I said, “What do you mean?” “Well, if you want more popcorn, you want a hot dog, just hit the blue button.” I said, “Well, do you stop the movie while you’re delivering?”

“No, no. Just hit the blue button and we’ll be here.” And they were. And it was quite an experience. And the movie, the focal point was awesome. The character Mitch Rapp, everybody that’s a fan of these books, that’s a key element, and they found a great guy to be this. I was stunned. Look, I don’t want to give anything away, either. But there’s something in this movie I’ve never seen before. The depiction of a nuclear explosion underwater is the most… I think. I’ve never seen one. But I’m guessing that this is the most close to realistic portrayal of what that would look like that I’ve ever seen.

The movie’s true to the novel. The screenplay was, of course, not written by Vince. But they worked for a long time to get it made, and it really was fun. It’s an hour and 18 minutes, and it just zipped by. And it opens on the 15th. And I’m not telling you to go see it because it’s payback for them giving me the screening or because it’s Vince. It really is good. It just a flat-out good, old-fashioned, entertaining movie. And you know what? I know a lot of people are gonna think I’m crazy with this. 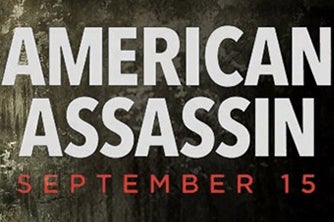 But there are two or three times in this movie where you think you just know that Mitch Rapp and the babe are gonna end up copulating in the sack, and it doesn’t happen! They don’t screw up the movie that way — and I’m not talking about it from a morality sense. I’m talking about it from a realistic sense. They’ve not put that gratuitous sex stuff in it to lure viewers. There’s plenty of stuff for women, though. Don’t misunderstand. I mean, I don’t want to give it away, but the opening segment will have the women in the audience captivated for the rest of the picture.

But there’s nothing gratuitous in it, and I just was thoroughly entertained. I had such hopes for it because, you know, it’s Vince’s estate. It’s his work, and I’ve had so many authors tell me that ,when their work ended up on screen, the compromises necessary were disappointing. I don’t think this would in any way disappoint Vince. I know it didn’t disappoint Lysa. It’s awesome. So what is this? What’s the date today? This is the 12th? So it’s Friday, three days. At the iPic Theater on Wilshire, you can get a $925 bottle of cabernet.