CNN Thinks the Trump Base Exploded

RUSH: So I just checked the email during the break. “Dear Mr. Limbaugh: The only reason we are having this day of news today, the only reason you are speaking about what you are speaking about today is because the (blanking) Republicans will not do what their party’s president ran on doing. This is not Trump’s fault. It is the elected Republicans’ fault. Sent from my iPhone.” I suspect that that’s a popular sentiment out there.

Now, CNN is having the best time today. I’ve been watching. They’re over here in like — well, maybe like a 13-inch monitor over here to my right. It’s like a 16-by-9 letterbox, everybody SqueeZoomed, like they all look short and fat. It’s a perfect, perfect picture for CNN, of the guests too. But they’re just having the best time because their graphic on the screen all the time is: “Trump base explodes over hints of ‘DREAMer’ deal.” 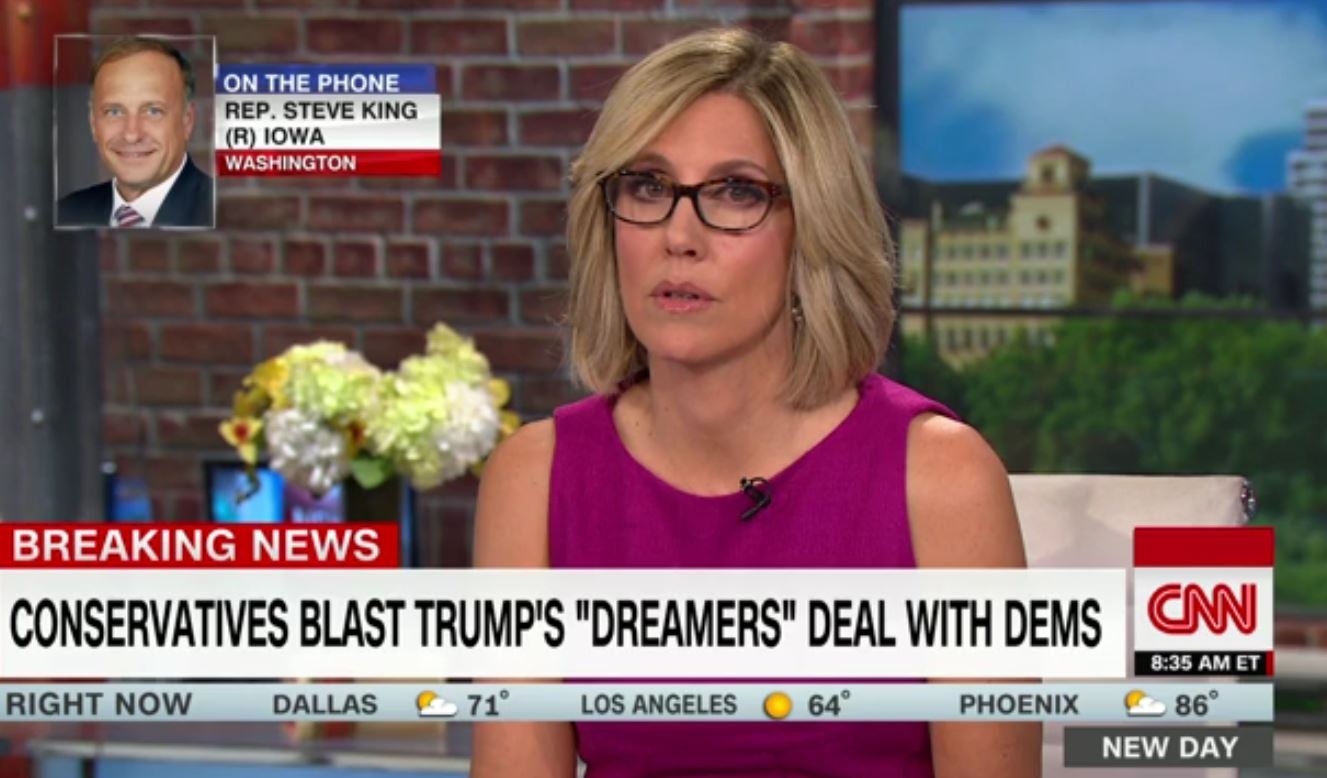 Meaning you are exploding out there. You people are near the end. You’ve had as much as you can handle. And here is arguably what they’re using to say that. It’s Steve King, congressman from Ohio. He was on CNN today with Alisyn Camerota. This is very early this morning asking about Chuck and Nancy coming out saying they had a deal. And the question she asks, “What did you just hear, what’d you hear the president say?”

KING: Wanting a big or a large or a massive border security deal, that doesn’t address domestic enforcement. If we don’t build a wall all the way through then the rest of it is subject to prosecutorial discretion, his, as was under Barack Obama’s, or the next president. So I think something’s gonna have to be reversed here with this president’s policy or it’ll just blow up his base. I mean, this was a straight-up promise all the way through his campaign. I don’t think it’s unclear to anybody what those campaign promises were, but it looks to me like he’s preparing to keep Hillary Clinton’s campaign promise rather than his own.

RUSH: Congressman King at this point in time in the morning believed what Chuck and Nancy were saying, that Trump had a agreed to a deal on the DREAMers and had gotten nothing on getting rid of the wall for it, and the wall was not part of the deal.

He wasn’t the only one. David “Rodham” Gergen, who is the definition of Washington conventional wisdom. You ever want to know what consensus and groupthink and conventional wisdom in Washington is, just find what David “Rodham” Gergen is saying and you’ll find out what 99% of ’em are thinking. And he was on CNN last night, after Chuck and Nancy came out after dinner and started chortling about how they rolled Trump and they got what they wanted and no wall and so forth. Here’s what Gergen said.

Gergen: I think there will be a lot of Republicans look at this and say, this guy may cut a deal, but he gets rolled in the deal. I mean, he gave up the wall and he gave up DACA, and what does he get back in return? We don’t know yet, but I can’t tell you it’s gonna be very much. It’s gonna be some more enforcement, Obama did that. That’s not a big deal. So on the deal itself he got rolled, and I think there gonna be a lot of conservatives who are gonna be reacting very angrily.

RUSH: And they were, ’cause that’s what they were treated to. Chuck and Nancy come out last night, “Ha-ha, Trump gave us the DREAMers, and they say there’s no wall.” “We told him he could take his wall and put it where the sun don’t shine. He agreed!” Then AP runs their story, so Steve King, “This is not what he said he was gonna do. This is Hillary Clinton’s promise.” Gergen comes out there, said, “He got rolled.”

So that’s what everybody woke up to. Me, too. But since the Drive-Bys are involved, I’m sorry, folks, I just never, ever do I accept anything, I don’t care what. If it’s football, if it’s the space program, if it’s anything, I automatically do not believe it. Not everything. I mean, I don’t care what they write about local issues and all that. But I’m talking about this kind of stuff, national issues of great importance. I do not believe.

RUSH: No, no, no, no. I’m not saying Trump voters are a cult at all. I’m saying the attitude of implicit trust, people don’t trust politicians like that, and yet a lot of people will profess blanket trust of Trump. Inside the Beltway, that’s foreign behavior. They don’t understand that. I mean, they had that kind of faith in Obama and they had that kind of faith in Bill Clinton, but people having it in Trump, since they think Trump is a bumpkin to begin with, that anybody who has blind faith in Trump’s got to be an even bigger bumpkin.

But I’m not the one calling Trumpists the equivalent of a cult. The Drive-Bys, some of them do, as a means of not having to deal with you seriously. There’s also something else. It’s not a big deal, but it’s quite noticeable and obvious to me, and it’s a little hypocritical, and it’s a little contradictory. Here we have all of these Republicans in the House and the Senate — not all, but I mean a majority who, for seven years, ran on repealing and replacing Obamacare. They promised, seven years.

When it was time to reelect, time to campaign, promised. They promised to get rid of it. They even passed legislation. They voted in the House and Senate for legislation to repeal Obamacare, and it got sent the to the White House. Obama vetoed it. They knew he would veto it, but they passed it. They passed it a multiple times, more than three times. And they sent it up to Obama, and it got vetoed.

But a mere suggestion in the Drive-By Media fed by a couple of Democrat hacks that Trump’s not gonna build a wall, and those same people go into hysterics and start experiencing outrage that Trump is breaking a promise. And I find it a little curious. They fall for a story that makes it look like Trump is going to break a promise or has broken a promise, and they’re outraged. That’s the end of Trump. Why, that’s the end of Trump’s base.

And yet they, seven times, all these promises to repeal and replace Obamacare, and they don’t expect to be held accountable to it. It’s typical of inside-the-Beltway or swamp behavior. In other words, Trump has no latitude and no leeway. And apparently there are not a whole lot of people there that have confidence. They are willing, apparently, to believe that Trump’s been lying to ’em all along, while, if you want to characterize it this way, how many years have they been lying to voters about their intentions on repealing and replacing Obamacare?