My Week in California

RUSH: Steve in San Diego. You’re next on the EIB Network, Rush Limbaugh program. How are you, sir?

CALLER: Very well. Thank you, Rush. Hey, I got three things I’d like to talk to you about. One is personal, and the second is a comment about Monday night’s football commentary.

CALLER: And then just a question.

CALLER: A couple of months ago, I was listening to your show when Scott Baio called in and invited you to come out to the West Coast to play a round with him and his cronies. I so much wanted to be part of that foursome, but I knew that there was no way. So I thought, when I heard you were out here, I’d invite you down here to San Diego. So if you want to play, want to come down, you’re more than welcome.

RUSH: Well, I appreciate it.

CALLER: Beth Myers. You were talking about the telecast. She was phenomenal. You know, aside from, you know, the ESPN left-leaning outlook, she was really good, play-by-play she was perfect. And I grew up with, you know, the best in the business, Chick Hearn and Vin Scully, so I think I know. Last week —

RUSH: Let me tell you, if that’s who you’re comparing her to, she should be profoundly complimented, if you’re comparing her to Chick Hearn and Vin Scully. I was, I can’t divulge — watching on an iPad and not on a big television in the room because I was smoking while watching the game, which means I had to be outside. So I had my iPad out there and there was all kinds of noise outside, people partying and jackhammers, so I was just watching closed-captioning, reading closed-captioning. I really didn’t hear much. When I did hear her, she sounded informed. She wasn’t stuttering. She sounded confident, but I didn’t hear enough to know, so I’m sure she’d be thrilled with your review.

CALLER: She was exactly there. You know, relatively, you know, comparatively —

RUSH: What did you think of Rex Ryan?

CALLER: Boy. Not much. I’m being kind, okay? Not much at all.

RUSH: That kind of fits with the reviews.

RUSH: This is typical of sports broadcasts. So here’s Rex Ryan, a big bellicose, bombastic coach in the post-game press conference. “Boy, this guy’d be great on TV. He’ll say anything, plus he’s got a toe suck fetish.” So they put him on TV — well, he does. He admitted it in a postgame press conference. Anyway, he gives fans the finger when he’s at other arenas watching events and so forth.

RUSH: So they thought this guy would be great. And it’s different when there’s a microphone and you’ve got 30 seconds and so forth. Maybe he’ll get better, but your review is commensurate with what I saw elsewhere.

CALLER: Okay. Perfect. Lastly, you know, I just wanted to know how your experience out here on the West Coast was, or has been. I know you’re in a bunker and not sure how insulated you are from the regular folk, but there’s a lot of left lug nuts out here, and I’m wondering if you’ve managed to change any minds or get them to look at things a little differently? 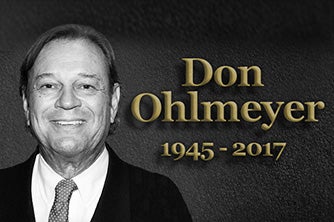 I like it very much out here. I have a lot of friends out here. I haven’t seen them this week because it hasn’t been social this week. And some of them are not even here, and my time schedule has not met with theirs. And then we had the death of Don Ohlmeyer during the week, and that’s a lot of mutual friends there, too. And then the hurricane back home and wondering what’s going on, power coming back, what damage. A lot of distractions this week, but I like it out here very, very much.

If it weren’t for the tax situation out here, there are plenty of people out here that I know that I could have, you know, not an oppositional existence each and every day. I lived in Sacramento from 1984 to 1987. I liked it there. I think California’s a beautiful state. It’s a shame that the people that run it run it. But even with that — you put that out of your mind as often as you can — I always have a great time when I’m out here.