Is Trump Destroying the Two-Party System?

RUSH: Here’s this piece: “The Party’s Over: Republicans and Democrats Are Both Finished.”

Here’s some pull quotes from the story. It’s a CNBC piece that ran on Friday. “The important thing to remember is that all the craziness we’re seeing in Washington these days is not just the result of this president’s personality or some new level of political anger across the country. An old order that’s been in place for generations that kept a lid on the kind of chaos we’ve seen in recent months has crumbled.”

But there is a club-like dress code, a club-like approved mode of behavior. And of course Trump doesn’t fit into any of it. And this guy’s point is that if Trump can come in here and throw the establishment upside down, throw it for loops, totally discombobulate it, with chaos being the result, means they are failing to keep the lid on their club. And I know what he means. It’s a very exclusive club. There are behavior codes. There are ways you can get excommunicated and thrown out, things you have to do to stay in the good graces. And in the process they’ve kept everybody within certain boundaries in terms of public speaking, behavior, appearance, and so forth.

Trump has just thrown it all out the window, and people are liking it. People are saying, “Yeah, Trump’s real. You know, none of this fake, none of this buttoned-down phoniness. Real guy.”

So he goes on to say here: “These are uncharted waters for sure, but they may not lead to such bad results. After all, the partisan political structure in place for so long has brought us numerous wars, $20 trillion in debt and a government that’s grown well beyond its usefulness.” Exactly. And I’m not gonna go through it again, but I will throw in the destruction of the whole idea of the college education is part of what this group has done.

They’ve made it so expensive that graduating with a degree is only the beginning of your problems. Dealing with the debt that you have, ’cause it costs so damn much to go. You can’t deny — you know, war, folks — the way to look at war, in many ways, not all, the way to look at war is it’s a bang-up business. It is one hell of a business. Have you ever stopped to ask yourself why there always seem to be wars going on? Any day of the year there’s a war somewhere going on.

Do you remember Lifestyles of the Rich and Famous? Remember that show with Robin Leach? For a two or three-year stretch on that show, the big celebrity was an arms dealer made Adnan Khashoggi. He was Saudi Arabian. Now, they didn’t tell anybody he was an arms dealer. They pushed him as a Rolls Royce driving, multiple pool, multiple wife, brilliant guy, fascinating investor, smarter than anybody. The guy was an arms dealer!

The guy was a middleman for people that didn’t have access. Say you want to buy some tanks or some missiles or jets from the Department of Defense, you know, well, if you’re from East San Cordoba, you just can’t call and get ’em. But Adnan Khashoggi could get ’em for you, and he took a hefty fee, and that’s why he was wealthy. He’s an arms dealer. And there are lots of people around the world that do what Adnan Khashoggi did and does. They get wealthy.

But the next time any president promises you a troop withdrawal from country X and it doesn’t happen, ask yourself why. And then when steps are taken to prolong the war, such as rules of engagement that basically allow our guys not to shoot anything, just prolongs the war, prolongs the need for armaments, so forth.

Yeah, then you’ve got guys like this pot-bellied dictator in North Korea launching missiles every day. That’s a guaranteed reason to make sure you keep making ’em. (interruption) No, no, no, no, I’m not saying somebody’s paying the guy to launch. No, no, no. Not my point. I’m just saying that it’s a big business. Uncharted waters for sure. Establishment has led to a lot of bad results. Numerous wars, 20 trillion — these from the smart people, the best and the brightest, people that are far more qualified than you and I to hold these positions. And what have we got?

Then he says, “Love or hate it, it’s time to face this new reality: The Democratic and the Republican parties as we know them are finished and the politicians, the people who give them money, and the people who cover them need to adjust accordingly.”

Now it’s this guy’s opinion — name is Jake Novak at CNBC. And I just gave you a few pull quotes. It’s a little longer than what I’ve shared. We’ll link to it at RushLimbaugh.com. But there’s something to it, when you look at Trump. In the normal political structure of Washington, Trump would not have been elected. I mean, nobody outside of Trump, after his opening statement, would have been elected. Remember how the swamp couldn’t figure it out?

Here comes a guy with his wife down the escalator at a Trump Tower and immediately launches into a rant on illegal immigration and how most of them are Mexicans who are rapists and criminals and thugs and we’re gonna kick ’em out and keep ’em from coming in. And then he said he doesn’t respect people like McCain, because he don’t like military people that get captured. He likes generals and so forth that evade capture. Imagine George W. Bush saying that or Mitt Romney or Obama or Bill Clinton or Hillary. They’re done for. It’s the end of them. And the swamp thought it was.

I remember after the announcement I turned on Fox and CNN and people are laughing themselves silly. They thought it was one of the greatest comedy routines they had ever seen and they’re all analyzing, “Okay, what’s Trump’s real purpose here? Is he promoting the upcoming season of The Apprentice? What’s he doing here?” Nobody thought he could have possibly been serious. And then it just keeps getting, from their perspective, worse. Then he starts insulting women. In their view he starts insulting women. Then of course it kept going, the Access Hollywood tape, the Billy Bush tape.

There’s not a single establishment person that would have been on that tape. Mitt Romney, George W. Bush, would not have come out of a trailer talking to Billy Bush about what celebrity allows you to do with and for women. It just wouldn’t have happened. It would have been a violation of behavior codes. The hair. There’s nobody in the world with orange hair that would have ever been elected, and orange makeup. None of it mattered. Yeah. The eyes were not orange. He looked like an orange raccoon with the makeup job.

So there may be something to this that the parties are on their way, if not to being finished, to being redefined. But both parties are in denial. The first party that has people in it that recognizes what’s happening here and can find a way to get in front of it and become part of it, kind of like the Republicans didn’t want any part of the Tea Party, either. Remember that? Imagine what would have happened if they’d embraced the Tea Party, but they didn’t. Strangely enough. 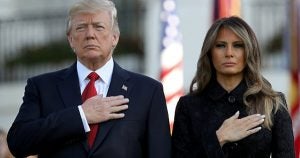 RUSH: Another thing on this Trump business here, the parties, the end of parties. Remember, Trump is not a partisan. Remember that. By that I mean he’s not an ideologue. He doesn’t have an ideological grounding, conservative-liberal. He just doesn’t. A lot of people don’t; he’s one of them. It’s one of the most amazing things about him, and that he got elected that way, but it’s quite telling, don’t you think? And the media refuse to believe it. They’re gonna pigeonhole him, and they’re gonna cookie cutter him, and since is he’s GOP he’s gonna be a racist, sexist, bigot, homophobe Nazi white supremacist, no matter what.

It’s not who they think Republicans really are. It’s how they have decided to characterize Republicans in order to beat them. They’re friends with Republicans inside-the-Beltway. They don’t think McCain’s a racist, sexist, bigot, homophobe except when he runs for office for president. And they don’t think Romney’s all those things they said about him, but when these guys seek high office, that’s what they become, so does Trump.

But Trump isn’t a Republican. He may be on some days. On other days he’ll start acting like a Democrat, and other days he acts like neither one. Like I pointed out, being nonpartisan, being bipartisan, that was the way to go. And now that Trump’s the guy doing it, they hate that.