RUSH: I’m glad you called. Great to have you here.

CALLER: I can’t even believe I’m talking to you. (giggling)

RUSH: Well, here you are. It’s great to have you with us. It really is.

CALLER: Hi. I just wanted to call. Longtime fan. Our whole family’s a longtime fan of yours, back from Kansas City Royals. My grandpa was a longtime season ticket holder and club member all through the eighties. He loved you then — and through my mom, I’m definitely a Rush Baby.

CALLER: I’m a 27-year veteran of the Army, just retired in January. So we’re big military supporters as well. But I had to call — and I can’t even believe I’m talking to you — when you mentioned my dad’s name, Bill Tobin, earlier.

CALLER: I am. (giggling)

RUSH: Is it Bill or Vince that worked at the Lions?

CALLER: Bill worked at the Lions. Vince was the head coach of the Arizona Cardinals. My dad started 1975 with the Packers for a few years, and he was instrumental. He drafted Walter Payton. He was instrumental in the Bears’ ’85 Super Bowl. After that went to the Colts, was with the Lions recently and is now actually working for my brother, Duke, with the Bengals, so —

RUSH: Laurie, our phone system’s very bad; when you’re talking you can’t hear me. It’s not your fault.

RUSH: But I need to ask you specific question.

RUSH: Was Bill Tobin, was your dad at the Lions when Matt Millen was the general manager?

RUSH: Okay, because I talked to him. The reason I’m asking you, I went in the day Ford Field opened; it was a pregame exhibition game intense the Steelers. It was the first game, maybe the second game of the season. And as I’m — they were escorting me through the stadium meeting people, and your dad came up and said hello to me and introduced himself, and said, “Hey, we’re big fans and all.” He was nice as he could be. I’ve never forgotten it. That’s why the name — I remember the name Bill Tobin when I saw the news story with him quoted today.

CALLER: Well, that’s — let me tell you, he’s seen a lot, and over the years, the many, many years he’s been with the NFL, and, you know, he’s definitely seen the changes. And, you know, it’s not for the better. But it’s been a great ride growing up with the Bears and the exciting time when we were in Chicago as well as, you know, down the line. 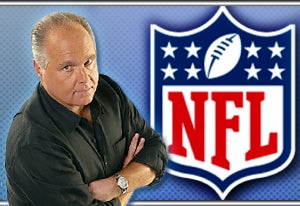 RUSH: Your dad… I’m looking for the story now, and it must be in the Stack. I can’t get to it right now. But your dad had some really… I mean, they were clear-cut and to-the-point comments about what’s happening in the NFL in which he said (paraphrased), “Look. People have concussions outside the NFL. People die outside — people who never played football. These things all happen, and to claim that football is responsible for all these things, it’s sad. And what they ought to do is don’t harm the game. Let people that want to play the games sign something and let them play the game the way the game is meant to be played. There are plenty of people that want to,” and all that. And I let, Laurie, that it was a courageous-as-hell thing to say in this particular atmosphere.

CALLER: (chuckles) Well, you know what it is, I think it’s from the — my mom sent me the link, and I didn’t read the article yet, ’cause they went up to play in Green Bay, and my dad started his career back in 1975 with Dan Devine at the Packers. So I think it was a sportswriter, I’m pretty sure, up there. Now I wish I had read it all (chuckling) and stuff. But, you know, I’m busy with kids. My mom sends me a lot of things that I get to eventually. Unfortunately, that’s the difference between —

RUSH: Well, you need to read this link. I can tell you you’re proud of your dad, but you should read —

RUSH: — this because he’s clearly an old school guy —

RUSH: — and he loves the game as it’s always been played and so forth, and it was — mentioning he was with Bengals. It was a really big. It’s why it stands out with me today.

RUSH: Drew Brees is the one player that said something today, or yesterday, that I saw that stands out. Brees acknowledged… You know, he said what he had to say about Trump’s comments and so forth. But he said, “I’m never gonna understand not standing for the anthem. I don’t ever want to see that,” and that was —

RUSH: — the only guy, only player that I’ve heard say that.

CALLER: Well, one more thing, just to throw a real big kink in it. You know, if you’re Google his name, he played back in ’63 and ’64 with the Missouri Tigers (laughing), Mizzou. So here’s a Mizzou grad. So, needless to say, he has seen a lot.

RUSH: Well, if he was at Mizzou back then, then he was at Mizzou when Mizzou was Mizzou. All right. Well, this is Laurie, and she is the daughter of Bill Tobin, and I happened to mention him in a story last hour — and what are the odds that she would get through here? I am is to glad that you did. I’ve gotta go ’cause I’m out of time, but this has been a sheer, joyful pleasure talking to you.