RUSH: Donald Trump’s on the way to Indiana to give a speech about the tax cut plan. He stopped for a little miniature presser with the Drive-Bys out there. He said a couple of things. He said that they have the votes for the health care bill. They’ve got the votes but some senator’s in the hospital and can’t vote by the deadline, so they’re gonna wait until early 2018. 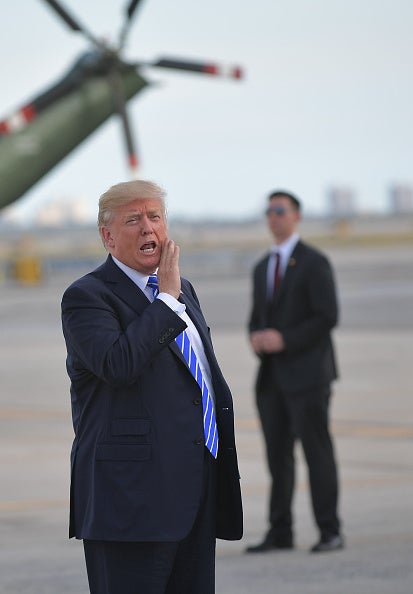 RUSH: Now back to the phones to Belmont, North Carolina. Hi, Jeb. Great to have you with us.

CALLER: Hey, Rush. Huge honor to talk to you. I want to be real quick about this because I know you’re coming up on a hard break. But with the health care bill failing and knowing that the Democrats are now gonna try to get Republican RINOs to try to help them out to, quote, “fix it,” the Obamacare, we know “fix” means throw money at it, so let’s see where the money is and what the money is, and that’s the payoff to the insurance companies that are losing money under Obamacare.

So knowing that the liberals hate the compensation packages these CEOs get, we use that as leverage and say, “Okay, libs, we’ll work with you. We’ll give you the money that you want. In turn, we get to dictate or at least have huge impact on what these CEOs and executives at these insurance companies get in their compensation packages ’cause now we’re paying you.” So that would then hang it on the CEOs to say, are you gonna cut your pay or are you gonna pass on the money and hang the American public out to dry? Make them the bad guys.

RUSH: Wait a minute. Are you suggesting the Republicans ask to take control of compensation pay for insurance company CEOs?

CALLER: I don’t think take control of, but let’s say have some serious impact or say on what their packages are.

RUSH: I don’t want to open that door. I’m sorry. There is no way under the — Bill Clinton tried this in one of his tax cut plans. Remember, he worked harder than he’d ever worked. (doing Clinton impression) “I worked hard on this thing, and aside from some stuff with Gennifer, I worked harder on this than anything in my life, and I just can’t find a way to give you that middle-class tax cut I promised. I’ll tell you what I’m gonna do. We’re gonna put a $1 million limit on the deduction companies can take after paying their CEOs way too much.”

And no way. I don’t want the government involved in anything anybody makes except their own employees. I know what you’re thinking, but I don’t want to open that door. I don’t even want to see that door.

It was in his impromptu press conference at the White House when he was on the way to the helicopter to catch Air Force One on the way to Indiana. He did say it, but Trump also said that they have the votes when one of the senators gets out of the hospital. But he said he’ll work with Democrats, didn’t say he’s going. But he’s already worked with the Democrats once before on the debt limit and other things.

What is the news here? This is not news. But to CNN it is because they think Trump’s caving. They think they’re forcing Trump to cave, and anything that they can see or report that makes it look like there is unrest or disunity on the Republican Party side, that’s all CNN needs to think they’re having a great, successful day. And it’s all rooted in the fact that they still do not know who Trump is or trying to understand him.

Now, Trump says they’ve got the votes if they get the guy out of the hospital the first part of the year. The Republican Party gave up. What’s he supposed to do? He said he was gonna reform Obamacare and repeal and replace it and so forth. And something is gonna have to be done if it’s left alone, it’s gonna implode and it’s gonna lead to single payer anyway. That’s what was designed to do.

But don’t panic over this. I know not many of you watch CNN anyway, but they’re just having the grandest time. They just think that this is another way they’re gonna beat Trump and pound the Republicans into the sand. And the Republicans are doing that all on their own.