Don’t Miss Me on Hannity Tonight at 9PM ET 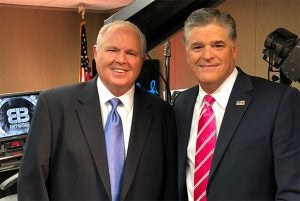 RUSH: Folks, if you could have seen this place about a half hour ago, maybe 45 minutes, you would not believe that we would ever do a radio show out of here today. The Hannity crew showed up, when did they get here, six a.m.? These tech people on the TV show, they showed up here at six a.m., the interview starts at 9:45. They were all set up and out of the studio when I got here.

So I was able to get here about 8:30, start doing some prep work. Hannity and his crew rolled in here about 9:15, 9:20, we start the interview at 9:45. It’s over and they start tearing down. They’re gone. It’s amazing. There’s no evidence anybody was here and yet there must have been 35 people in this building, all told. 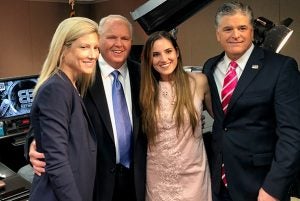 That interview went longer than 45 minutes, didn’t it? Or was it about 45? I didn’t check the clock either way, but it’s a two-parter on the Hannity show on the Fox News Channel, tonight part one at 9 o’clock, and tomorrow night part two. And it was awesome, folks. For once I’m kind of eager to see it. I never want to watch myself on TV. I never like it. But everybody is just raving about this. Snerdley was raving. Kathryn was raving about it! Dawn was raving about it. When they don’t like it, they say so. So that’s that.

My niece is on the Hannity staff, she was here today. The commie babe makeup artist, Debra, does not look a day older. I mean, she’s aging so well. It’s incredible. No, it’s not good makeup in her case. She told me her kids are now 21 and 17. And when she was the makeup specialist for Rush Limbaugh the TV show she didn’t have any kids. 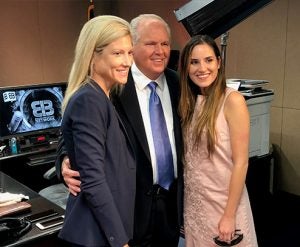 By the way, a full-court press is on to get me to do TV again. You should have seen this! I mean they were coming at me from every — even the lighting and sound people. “You know, you really do need to be back on TV.” Full-court press. I’m beginning to think now the caller we had yesterday about this was a staged setup caller by somebody who wants this to happen.