RUSH: No, no, no. My point here is it should be easy to defeat the left the because we know what’s coming. They can’t innovate. They’re using things 30 years old. They’re just adapting issues but they’re not adapting techniques. Here’s an example. It’s not the best, but it’s an example. They brought back Will & Grace on NBC. They’re going back to the glory days of Thursday nights. If they could bring back Seinfeld, they would. They went back to Will & Grace. What do you think they did in the opening act?

I didn’t watch it. I am reading a report. (interruption) That’s exactly right. It was an anti-Trump bash fest. “Make America Gay Again” was the theme of the Will & Grace show. Now, it’s gonna find an audience, obviously, but this is the way the left innovates: Go back, get something from the Grooveyard of Forgotten Favorites, and try to adapt it to modern times, rather than innovate — and it’s what they’re doing.

In their opposition to Trump’s tax plan, there’s no new innovation in their reasoning. Their reasoning is formulaic. It’s from 30 or 40, 50 years ago now, and it doesn’t matter what the details of the tax plan are; they have a way of trying to stop it or defeat it that is eminently predictable and ought to be completely ineffective because it’s so tired and worn out. But that will only happen if opposition rises to it and creatively tries to push back, rather than the usual defensiveness. 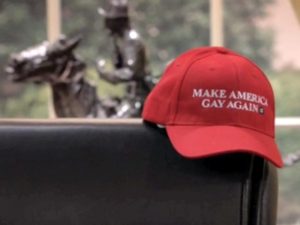 RUSH: Now, this story is at TheHill.com today. Here’s the headline: “Democrat Addiction to Trump Attacks Gives Party Cause for Concern.” So what do we have here? We have a story in TheHill.com, and they are waving a white flag at the Democrats. They’re trying to get their attention. This is a case of the media trying to tell these Democrats, “Wake up! What you’re doing vis-a-vis Trump is not working!”

“Democrats are linking Republican gubernatorial candidates to President Trump in New Jersey and Virginia, two states won by Democratic nominee Hillary Clinton in last year’s presidential election where the attacks could drive base voters to the polls. But some Democrats are concerned about their party’s strategy. Even if Democrats win the two contests, they say it could give the party a false sense of confidence that attacking Trump is the best way to win the House and Senate in 2018.”

Well, that’s the only thing the Democrats have, folks. They don’t have an agenda. If they did, Hillary Clinton would have been all over it. Actually, they do have an agenda; they just can’t tell you. They’re all for sanctuary cities. They’re all for amnesty, mass immigration. They are all for the grievance industry. They are all for granting whatever grievance any minority group has. They are all for putting together a coalition of minority group after minority group to wipe out the white working class voter segment. They did it starting in 2011. They’ve gone down the tubes with it so far. Another great example, by the way, of how they have an erroneous idea of the makeup of this country. It was an active Democrat Party decision led by Obama in November of 2011 to stop campaigning for the votes of white, working-class Americans.

They made an active decision to punt and rather seek a giant coalition of every minority group you can imagine, create as many victims as they can, set themselves up as the grand saviors, paint the conservative Republican segment of the country as the devil, as the enemy, as the people who do not want them to have equality and do not want them to have sustainability and who are destroying the planet.

Well, we see what happened to Mrs. Clinton. She couldn’t run on that agenda; no Democrat can. So what did she do? “Trump is unfit. Trump is dangerously unfit. Trump is unqualified. Trump’s a pig. Trump’s this. Trump’s that.” She loses, she loses in an electoral landslide. She’s still so shaken up, she’s still campaigning for herself while out there ostensibly campaigning for other Democrats. And they wish that she would leave the stage. She’s nothing but a big negative, but she won’t leave the stage because she still thinks it’s hers.

And so now we get this: “Democrat Addiction to Trump Attacks Gives Party Cause for Concern.” Meaning, there are Democrats that think, “We gotta come up with something besides attacking Trump.” And that isn’t even working now! But all this time they thought it has been because of their buddies in the media. All this time, for the last year they really believe that they have succeeded in delegitimizing Trump by linking him to this Russian collusion story.

They live delusions. They live lies. They create them, they invest in them, and they live them, and they think they’re winning. They think they’re turning back the tide, while Trump is marching on and winning and growing. Trump’s support base is growing. You’ll never see that reported in the media. They can’t dare, but it is. You might even say that Trump’s on a roll right now, and you can tell he knows it by just watching him in public with his rallies and his appearances, his attitude, his level of confidence.

They’ve thrown the kitchen sink, and it hasn’t worked, and yet that’s all that they’re planning on doing now. Their technique for winning in New Jersey and winning in Virginia is to link the Republican candidates to Trump, when most of them don’t even like Trump. Most of them are Republican establishment types who don’t want to be linked Trump. Mistakenly. But that’s all the Democrats have. They can’t innovate.

The point is they are for a united, coordinated attack, if the Republicans in Congress would just seriously get together and start advancing all of the Trump agenda.