RUSH: Remember this? This was back on October 2nd. It’s audio sound bite number 26. The estimable congressman Al Green, Democrat from Texas… 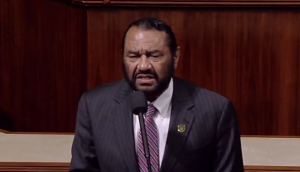 RUSH: (chuckling) There was no impeachment. Al Green filed the papers, but that’s not how it happens. So he canceled, he postponed the impeachment because of the Las Vegas shooting. Just moments ago on the floor of the House…

GREEN: I rise today on behalf of the many who have concluded that enough is enough.

GREEN: I rise today on speak on behalf of the many persons who believe that Article II, Section 4 of the Constitution of United States of America has meaning and that it is something that is appropriate for a time such as this — appropriate for a time when there is one among us who seems to incite hatred, bigotry, and invidious discrimination. The form of the resolution is as follows: Articles of impeachment against Donald J. Trump, president of the United States of America.

RUSH: Now, the Democrats don’t want to go there right now. They’ve tried to talk Congressman Green out of this. They’ve asked him to get together with Hank Johnson and hammer out an alternative plan. Hank Johnson is the Georgia congressman who was afraid that if the population shifted to one side or the other of the island of Guam, that the island would capsize and that the people there would drown.

So I think the Democrats want Congressman Green here to get together with Congressman Johnson and forge an impeachment plan for the future. The Democrats don’t want to do this right now. They aren’t ready. There isn’t any impeachable offense. Mueller hasn’t finished lurking in whatever trash cans he still hasn’t gone through. Oh, the impeachment’s on. Yeah. Impeachment was postponed because of Las Vegas, but there’s been enough mourning and there’s been enough sorrow.

And it’s now eclipsed by the invidious bigotry of Donald J. Trump, and so impeachment is back on.