RUSH: I’ve had more time to look into this and there are parts of this thing, folks, that are so frustrating. It’s just so damn frustrating. It’s just out-of-my-mind frustrating. We run the House, we run the Senate, we have the White House — and, still, it’s like we have a bunch of Republicans who don’t even have the courage to be conservative. They’ve lost their conservative ideals, ’cause they’re playing the same old game that the Democrats love to play: Class envy. They’re making a big deal out of taxing the rich; they’re holding on to the children’s health program.

Do you remember S-CHIP? The S-CHIP program was a program devised by Obama and supplementary to Obamacare. I’ll never forget it because it was paid for with the sales tax revenue from the sale of cigarettes and other tobacco products. Which prompted me, at the time, to suggest that we need to give smokers a medal, that we need to start treating smokers as heroes — and we need to encourage them to keep it up because they are paying for this new children’s health program.

Well, anyway, it ought to die; it ought to go away, what with the effort now to repeal Obamacare and downsize it, but it’s not. It’s not gonna go away. It was a program that was designed to fix a shortfall of something that happened and there wasn’t enough health insurance for poor kids so the S-CHIP program came along and addressed the problem. It didn’t work, and so now we are adding another addendum to it or keeping this program alive, when it hasn’t justified itself. It’s an abject failure. It ought to just be punted. We have the power to do this!

Did you know, ladies and gentlemen…? I’m not gonna find any sympathy for this, but I’m gonna try to make the case anyway. There is a hidden 46% tax bracket for some Americans in the Republican tax bill — 46%. Let me tell you how this will work. Of course, this hasn’t been advertised. The Republicans are not making a big deal out of this and for obvious reasons, because they want to maintain the fiction (and that’s what it is) that the top rate will be 39.6%, and it’s not temporary. It’s a rate of 46% on a limited amount of income, but it’s the reason that it’s there that is infuriating to me.

It stems from a provision intended to help the government recover some of the benefits that lower-income taxpayers enjoy. So this new rate of 46% is there to help the government pay for tax cuts for everybody else. So the rich, in addition to not getting any tax relief — unless you want to say the death tax kicking in four years from now is tax relief. The rich are not getting a rate reduction, and in fact are having a rate increase on a portion of their income that equals a 46% tax rate, all to pay for the tax cuts elsewhere in the bill!

Sorry, folks; that’s not how conservatives think. That’s not how conservatives operate. That’s not conservative theory or ideology or policy. Conservative tax policy does not derive from, “How are we gonna pay for it?” Conservative tax policy derives from, “It’s the people’s money. They keep more of what they earn because of their hard work in earning it, and government must shrink. Government must do without.” If we are going to reduce people’s tax rates, then the objective is to actually create more revenue to Washington by expanding the economy and growing it and causing jobs to be created, creating new taxpayers.

That’s conservative tax policy. Nowhere in conservative tax policy is this idea that it has to be paid for. That is pure liberal Democrat thinking, and we are adopting it in our tax plan. Steve Moore, tax expert, Heritage Foundation. He’s considered the guru on this by some in the media. They called him up and said, “What do you know about this?” He said (summarized), “I don’t know anything about it.” He said the surcharge is news to him. “I was just in a briefing with the White House on this and they didn’t mention it. This seems kind of bizarre to me.” So here’s of how it works.

After the first $1 million in taxable income, the government would impose a 6% surcharge on every $1 earned after the first million, until it made up for the tax benefits that the rich receive from the low tax rate on the first $45,000. In other words, remember what we went through yesterday, the new rates and the 12% rate? Everybody paid 12% on the first $45,000 they earn. Well, it is thought, “That’s not fair. The rich ought not have to pay as little as 12%. That’s not right. That’s not fair. The class warfare people will not put up with that.

“The rich ought not be treated like everybody else.” Everybody in this bill, every American on the first $45,000 of taxable income, the tax rate’s 12%. But the Republicans are looking at this and saying, “That’s not fair; the rich ought not get away like that!” So, to make up for that, they have added a 6% surcharge on income above $1 million until it made up for the tax benefits that they get from the low tax rate on the first 45%. I hope I’m making this clear. 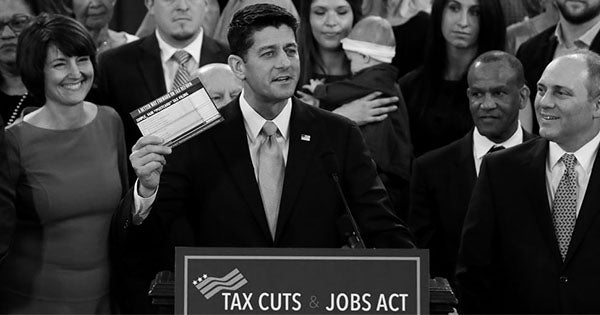 Rather than simply saying, “If you make a million or more, you don’t get any of your income taxed at 12%; we’re gonna go ahead and tax the first $45,000 of the $1 million dollars at 12%.” But we’re gonna conclude that that’s not fair. The rich ought not get that low a tax rate, and so to make up for that, we’re gonna impose a tax on the back end, and we’re gonna impose a 6% surcharge on every $1 earned after $1 million dollars until the rich have paid what they would pay if there was no 12% rate. The surcharge, in effect, will remain until the government has clawed back $12,420, which would occur at about the $1.2 million in taxable income level.

So here’s the way it’s gonna work. The rich will pay tax rates like everybody else does on the first million they earn. But because the Republicans think that it’s not fair the rich should ever pay 12% on any of their income, the rich will face a 6%… Well, “the rich.” These would be the wealthy. “The rich” are way, way out of this discussion. So once the rich earn a million and keep earning, they’re gonna pay 6% — an additional 6%.

So we’re now 45%, 46% on the next $200,000 that they earn. That will make up for what they’re not paying at a 12% rate on their first $45,000 earned. So the bottom line is, up to $1 million dollars, those people pay what everybody else pays. After $1 million dollars, they pay an additional 6% or a rate of 46% until the government’s losses are paid for — and the calculation is that that will be about $1.2 million in taxable income. At that point, the surcharge disappears and the top tax rate goes back to 39.6%. It’s called “a bubble tax.” 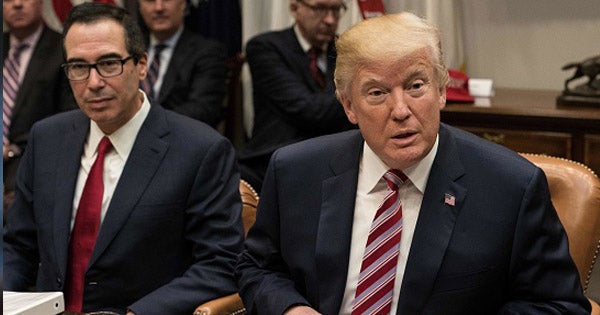 Fine and dandy. The reason it’s being done is what’s wrong. “The government has to pay for this somehow. We need to claw back what the rich are getting away with!” This is the way Democrats think! This is the way liberal Democrats think. This is the way demonize people: Claim some are not paying their fair share. We’ll see if this survives. There’s a lot of things… The realtors, as I predicted they’re up in arms over the whole mortgage interest deduction. So we’ll see how this falls out.

RUSH: Look, I say it’s not the money, but, you know, it is. Philosophically, it’s the money. You know, all of this is being done for $50 billion? The government cannot do with $50 billion less. Meanwhile, the Republican tax reform is going to expand the refunds to people that don’t even pay taxes. You heard me right! The Republican tax plan will increase the amount of money in the form of a refund that people that don’t even pay taxes are gonna get, and I’ll tell you why it’s infuriating. All of this seems to be a suck-up to the Democrats, or else our guys don’t really believe in their own ideas in the end.

Now, look, I know Trump is a factor here too. Trump is out there saying, “People like me don’t deserve tax cuts. I’m not gonna…” And I ran through the polling data with you on what the majority of Americans think, that the rich aren’t paying enough, and I get all that. But this isn’t conservatism, and we won the election. This is not conservatism. This is not the way conservatives think. This is not a tax plan that’s gonna promote growth in the private sector, the economy. Businesses are gonna make out okay. The corporate tax rate’s good. This is halfway good, but this is just a disappointment!