RUSH: Oh, and have you heard — folks, if you haven’t heard this, it’s the lead story at Drudge. Apparently somebody — I haven’t clicked the link, so I know outline things here. Judge Roy Moore in Alabama has been accused of sexual harassment. Now, you know what my initial reaction to that is? This guy is hated by the Washington establishment. Mitch McConnell and the boys did not want this guy winning that Senate seat. 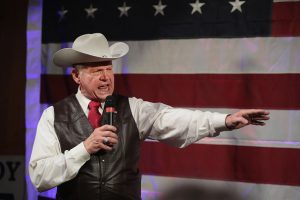 If this was known, it would have been found before now, don’t you think? Do you think Mitch and his opposition research guys could have found this? It only pops up now? And of course Judge Moore is this rock-ribbed Christian, Ten Commandments guy. This is made to order for the left to start just shouting about hypocrisy and all that.

I don’t know if it’s true; I don’t have any idea. My first thought is with as many people that wanted to nail this guy for so many years, why haven’t they found this until now? Or maybe they did and maybe they’re waiting because the purpose here is to undermine Trump. And Trump supporters like Judge Moore. Don’t forget. Trump didn’t endorse him. Trump endorsed old Luther. I’m sorry, endorsed old Luther. Bit of a tongue twister.

RUSH: Okay. Here is what we know about the allegations against Judge Roy Moore in Alabama. The Washington Post: “Woman Says Roy Moore Initiated Sexual Encounter [Against Her] When She Was 14, He Was 32.” The woman says that Moore initiated this. Moore says the Washington Post report is false and “fake news.” Mitch McConnell, Republican leader in the Senate, has already announced that if the allegations are true, that Judge Moore needs to “step aside” right now.

“Moore chatted with [the 14-year-old girl] and asked for her phone number, she says. Days later, she says, he picked her up around the corner from her house in Gadsden, drove her about 30 minutes to his home in the woods, told her how pretty she was and kissed her. On a second visit, she says, he took off her shirt and pants and removed his clothes. He touched her over her bra and underpants, she says, and guided her hand to touch him over his underwear.”

So that’s the extent of it, the extent of the so-called sex. “Aside from Corfman, three other women interviewed by the Washington Post in recent weeks say that Moore pursued them as well.” All right, now, some obvious questions arise. If this happened when Judge Moore was in his thirties, this is how many years ago, 20? How many…? (interruption) What? Is he 70 now, so…? Okay. Okay, so 40 years ago. So he’s had all kinds of political opponents in that period of time, not just seeking office, but in other political endeavors.

He’s been involved in numerous controversies involving statues and so forth of the Ten Commandments at the statehouse, outside the courthouse and so forth. The point is that there’s been ample opportunity for news like this to have surfaced throughout the course of Judge Moore’s career. So why now? Why after he has won the Republican primary in Alabama and is the candidate for the Senate to replace Senator Sessions? The Republican leadership is quick to pick up on this and say, “Hey, Judge, if this is true, you need to skedaddle.

“You need to pull out of this race right now.” Now, Judge Moore would be, for the left, a major, major get, ’cause here’s a guy who is essentially a devout, born again Christian, who lives it, who breathes it, who preaches it, and could they go to town on the hypocrisy part of this — and they’re salivating to! They can’t wait. The only thing… Well, I guess not the only thing. But it’s really suspicious that this stuff comes up so many years later, and it happens to be a story with details that seem to be exclusively attached to liberals and Democrats right now.

This sexual abuse, sexual harassment story, you don’t find too many Republicans in this story. It does appear from reading — and I haven’t had a chance to dig deep into it because of time constraints here. But it does appear that the Washington Post has been seeking out women who would go after Judge Moore. This supposedly happened in 1979. So that’s 38 years ago. Now, you think somebody in that 38 years knew this kind of stuff had happened? How does a guy like Moore with the enemies he has keep something like this bottled up for that long?