Let me start on the phones. I want to get phones in the first hour, Open Line Friday. Jonathan in Kaiserstadt, Germany. Great to have you with us, sir. How are you doing?

CALLER: Hey, Rush, I’m doing great. Such an honor to speak with you. 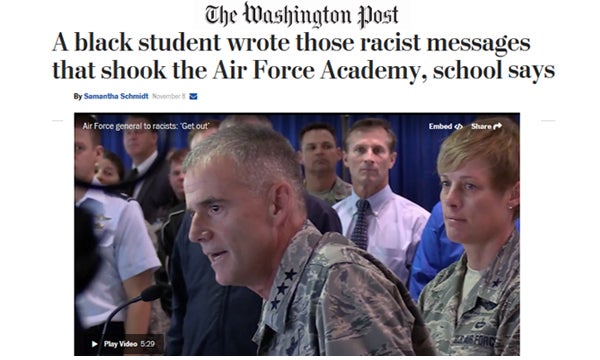 CALLER: The only thing I haven’t heard you bring up yet this week: The Air Force Academy discovered that all the racial slurs — you know the controversy that they had — they were all a hoax. That was just months after the superintendent, you know, he was lauded for his tough speech. I haven’t heard a lot of news about that. I picked it up on Fox. I just think that there’s a pattern here, you know, with the Duke rape case and the other thing, “hands up, don’t shoot.” It’s like there’s a big outrage. But then when they find out these things aren’t true, you don’t see a lot of follow-up.

RUSH: You know, I was talking to some people. Not about the Air Force thing, but I was talking to some people about this massive amount of allegations coming out of Hollywood. Jeremy Piven is flat-out just denying every one. There are three women who’ve offered details. He’s flat-out denying it. I was just thinking, “What do these guys do if it isn’t true?” Because with Weinstein and Spacey and everybody else, everybody’s automatically concluding it’s all happening and we’ve been told to believe that women don’t lie about this.

RUSH: Why are you laughing at that, Jeremy?

CALLER: (chuckling) It seems like there’s lots of evidence about —

RUSH: A-ha. A-ha. So the Air Force hoax, the left is pulling? Duke lacrosse? You’re exactly right. So there are any number of false, phony allegations. Like how about these allegations of rape that didn’t happen at various universities that end up being highlighted in magazines like Rolling Stone. I mean, the left is losing their minds on this stuff. What they can’t make happen for real — the stuff that they believe that isn’t happening — they just lie about it and accuse people of it.

CALLER: Absolutely, sir. When you have stuff about the Air Force Academy, you know, it gives us all a bad name.

RUSH: Jonatha, before you go, time is dwindling, and there’s a new iPhone out there, the iPhone X. Would you like one? I’d be happy to send you one if you’d like one. If you don’t want a X, I’ve got an 8 or an 8 Plus. You tell me.

CALLER: Oh, my gosh, Rush! The X, that would be incredible.

RUSH: That’s a good choice. You’re in Germany. Do you have anybody here stateside we could send it to and they could get it to?

CALLER: Yes, I do. I have a stateside address as well.

RUSH: All right. That would be the easiest way for us. But you’ll have it. So there we go. That’s Jonathan. He’s calling from Germany. We have to take break because of the constraints of time. We’ll be right back. You’re gonna love this X. I’m telling you, it brings back the fun. Just to use the phone, like the very first iPhone. You just used it to use it, used it to play with it. That’s what this one is.