RUSH: This is interesting too. This is Mark Penn. Now, this guy, he runs a think tank-type operation at Harvard now, and he’s a former pollster for Hillary and Bill and the whole Clinton operation. His name is Mark Penn, former Democrat strategist, and he’s on Fox & Friends today. Brian Kilmeade says, “What should a Republican take from Ed Gillespie’s loss in Virginia last week? Karl Rove come out and said, ‘Listen, Ed Gillespie got more votes than the other Republican candidate for governor when he was running. Just more people came out and voted for the Democrat.’ So, Mr. Penn, what do we need to take away from this?” 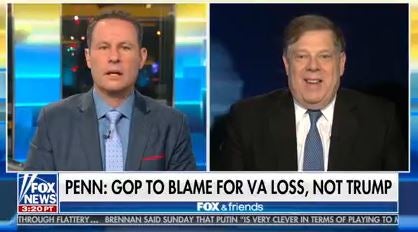 PENN: Oh, I think when you look at the exit polls the view here is far from simple. Number one, I think the Republican Party and the establishment itself is five points lower than Trump. Right there, that explains a lot of the problems I think that Gillespie got into — and, of course, Democrats had a moderate candidate, an Army veteran. And remember McAuliffe did a pretty good job, had a 54% approval rating.

RUSH: Yeah, and he legalized voting for 200,000 felons and a bunch of questionable refugees and illegal immigrants. McAuliffe did do a good job. But look at this. “I think the Republican Party and the establishment itself is five points lower than Trump.” This guy, for those of you in Rio Linda, this Democrat establishment consultant is saying it’s the GOP establishment that lost in Virginia, not Donald Trump. And it takes a Democrat consultant to get that truth out.