McConnell on Moore: I Believe the Women

RUSH: Some are calling this breaking news out there. I guess. It’s a very short sound bite of four seconds. It’s Jeffersontown, Kentucky, this morning. Mitch McConnell had a press conference, and a reporter and McConnell had the briefest of exchanges about sexual misconduct allegations against Roy Moore. Listen fast. It goes by in four seconds. 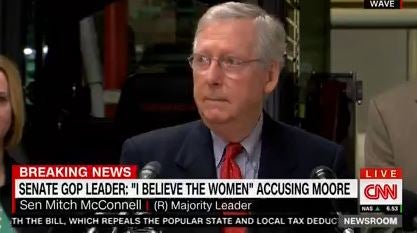 REPORTER: Do you believe these allegations to be true?

MCCONNELL: I believe the women, yes.

RUSH: “You believe these allegations to be true?” “I believe the women, yes.” Have you ever heard Mitch McConnell say a word about Bob Menendez? Have you? No, I’m asking. I haven’t, but I’ll be honest, I don’t follow the Senate leadership day in and day out. Menendez is a Democrat senator on trial for all kinds of corruption, including sexual predatoring with one of his big donors.  And Menendez has been accused of identical things that Roy Moore’s been accused of.

I’m just asking, does anybody remember McConnell condemning — this is what I mean by the left circles the wagons around their perverts, and we throw ours overboard, no questions asked.

Have you heard the latest? “Wait a minute. We can certainly get rid of somebody on the base allegations. We don’t have to wait for proof. That’s only in a court of law. No, no, no. He’s not entitled to the benefit of the doubt. There is no waiting for proof. That’s only relevant when we’re talking about in court or being judged before the law. But if we, the United States Senate, don’t want somebody here because of what has been alleged about ’em, we are perfectly within our right. We don’t have to wait for whether there’s truth or not, or guilt or innocence.” That’s what’s being relied on.

RUSH: Hey, want to hear a little factoid? The age difference between Roy Moore and the woman in question was 14 years. He was 14 years older than she was. You know what the age difference was between Bill Clinton and Monica Lewinsky? It was 27 years. Just saying. I’m just saying. One of them is a celebrated star of the Democrat Party. One of them remains the big dog of the Democrat Party. One remains the guy they all want to be like. Bill Clinton.

Now, the Joe Biden interview. (chuckles) If I didn’t know better, I would say that NBC’s trying to drive their own ratings down in order to maybe get a better deal with the NFL when new rights are negotiated. Why in the world would you do that? I didn’t see it. Did anybody? Did you guys watch the Biden interview? (interruption) You did? Let me ask you, did Matt Lauer ask Biden how he has got the nickname of “Handsy”? You do know that Biden has that nickname? Handsy as in “handsy.” Do you know why? (interruption) That’s kind of… (interruption)

You kind of close to it there, Mr. Snerdley. He gets kind of “handsy” with women. He’ll rub their shoulders and keep going, depending on the vibe that he gets. I’m not kidding. It’s just old Joe, you know. Joe can look at a guy in a wheelchair, “Stand up, Chuck! Stand up, Chuck, and let ’em see you! Oh, my God, what am I talking about? Oh, God bless Chuck! Let’s all stand up for Chuck.” That’s just Joe. One of the women that Mitch McConnell believes over Judge Moore is a woman who worked for Joe Biden. (interruption) Did you know this? (interruption)

You didn’t know this? This woman worked for Biden — who hates Roy Moore, by the way, Biden does — and this woman who cavorted with Moore, who worked for Biden, has called for Trump to be impeached since Inauguration Day. Now she has deleted her anti-Moore postings from Facebook and her rants about removing Trump from office. She’s deleted those things. Why would she do that? (interruption) I don’t think she wants to appear to be a partisan hack. She’s taken down all of the anti-Trump stuff. She has removed all of the anti-Moore postings and the anti-Trump postings from Facebook.

RUSH: This is Bobby in San Diego. Bobby, do you miss the Chargers, or do you not care?

CALLER: Well, mixed emotions. I liked the team, not the ownership.

CALLER: Hey, Rush, this is maybe changing the pace a little bit. I have a thought about what Trump might do. I think McConnell and the Republican senators, there’s always three of them that will screw up the works. I think it’s time for Trump to go to Plan B. I think he should go to Heidi Heitkamp, Democrat from North Dakota who’s running next year. She won last time by less than 1%.

And I would say, “Heidi, I got a deal for you. You support my tax bill, I will make you a promise. I will not go to North Dakota, and I will not do what destroys everybody I run against, and that is hold a Trump rally. Alternatively, if you want to vote against the will of the people of North Dakota, I’m gonna make your life hell and you can enjoy your last 11 months as a U.S. senator.” 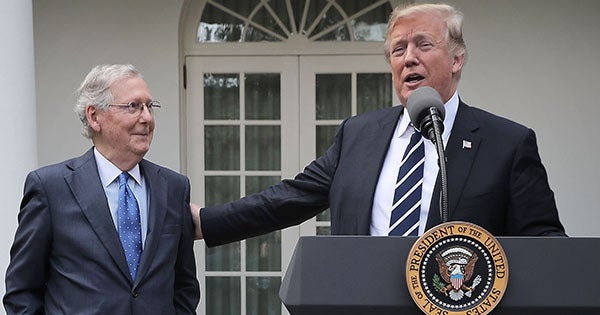 RUSH: That’s not Plan B. That’s the way Trump operates Plan A.

CALLER: Well, I think Plan A should be invoked, then. I know he did it before. But everybody’s so worried about, oh, what’s gonna happen to Judge Moore because McConnell’s trying to throw him under the bus. I think it’s time to go to the Democrats and have the Chuck and Nancy show again. Get two or three of those, get Joe Manchin. He wants to be a senator next year. He doesn’t want to lose.

RUSH: You know, here’s the approach. You may be on to something. Trump could go to these guys say, “Look, we got problems in my party, but your party has no problem with sex perverts. So you guys are not gonna run anybody out of your party. I could really use your assistance here on some of this stuff” and maybe even try to convince them to change parties, you know, sweeten the deal, change parties and promise them that if they do get involved in some perversion sex stories, Trump will do his best to defend them if they’re worried about that, changing parties.

To be serious, I get where you’re coming from here, that Trump needs to branch out because depending on the Republicans, not enough of ’em, and number two, it’s not obvious they want him to succeed, right? That’s what you’re really driving at here.

CALLER: Yeah, absolutely. In fact, I think Trump would rather, it would be his style to stick his finger, poke his finger in Mitch McConnell’s eye and say, “I don’t need your votes. You know, I don’t care what Jeff Flake and you and little Bobby Corker do. I’ve got the votes. You guys are the pikers.”

RUSH: I don’t think that’s what he wants to do. I actually think Trump wants to try to unify with these people, with McConnell. Still, I don’t know how long his patience is going to be for it. But if you just look at the numbers, look, he’s not gonna get anywhere — even if he could have massive success persuading Democrats, he’s not gonna get 50 of ’em. You might say, “We won’t need 50. If he could get 10, then you could deal with 10 Republicans defections.” But depending on how far he went with the Democrats, you know, how, quote, unquote, loyal would the Republicans be to Trump to stay with him. I don’t know. Those are interesting things.

But one of the things I think you’re bouncing off of is that Trump is not defined by convention. And he is his own man and can try to put together a coalition however he wishes, and especially now, now that he’s got ample evidence that it ought not be this hard to get your party to support your agenda. I keep sitting here and dreaming what it would look like if there could just be, you know, what I always have been saying, three months, six months of the entire Republican caucus in Congress unifying behind Trump.

I know the answer is that they’re all establishment types and many of them really don’t want Trump to succeed. But at some point something’s got to give here. And I really think there’s a lot of people, Bobby, that are sitting around waiting for Mueller and hoping Mueller comes up with something that drives Trump out, and that would make all of this much easier on them. That’s one of my not fears, but one of my suspicions.