One of the Funniest Tweets Ever

RUSH: Now, here’s the Trump tweet, and this is classic, because the media did not get that Trump was making a joke, which is what makes this funny. This may be one of the funniest tweets you’ve ever heard. Let me read it to you. “Why would Kim Jong-un insult me by calling me ‘old,’ when I would NEVER call him ‘short and fat?’ Oh well, I try so hard to be his friend — and maybe someday that will happen!”

So it establishes once again these people don’t have a sense of humor. They literally cannot sense humor. It just doesn’t occur to them. But their hatred, their willful hatred of Trump is so visceral that they’re incapable of seeing satire or parody. I mean, this is hilarious. He just called Kim Jong-un short and fat, while denying that he ever did it. It’s hilarious and they’re all just beside themselves about this.

RUSH: You know this tweet that Trump sent out about Kim Jong-un and the media reaction to it? I’ve used this description before. You know, you get this laser pointer and you play with a cat. If you have a cat, you can drive the cat nuts with the laser pointer. The cat can never figure it out. Some people think it’s cruel if you just keep doing it. The cat will continue to try to chase it, it will paw it, and it will try to catch it. As long as you do it, the cat… Now, my cat eventually will wear out for a while.

But if I come back in two or three hours it’s like I’ve never done it and the cat goes bonkers. And if I slowly point that laser up the wall, the cat will try to swat it off the wall. One day, I put the pointer on one of the dogs. (chuckle) That was fun. Anyway, I think that is how Trump deals with the media. I think it’s equivalent to that. I’ve made this point before. These Trump tweets, Trump speeches, they’re like the laser pointer to a cat. Trump drives these people insane — primarily with his tweets — and they can’t nail him down.

They can’t pin him down. They can’t figure it out. All they do is react in ways that demonstrate they are the ones who don’t get it. This tweet, “Why would Kim Jong-un insult me by calling me ‘old,’ when I would NEVER call him ‘short and fat’? Oh well, I try so hard to be his friend — and maybe someday that will happen!” You know, what’s going on? Here’s what the media hasn’t picked up on, I don’t think. Now, maybe I’m wrong about this. But I think we’ve reached a point here — and there will be exceptions to this where I will be shown to be wrong. 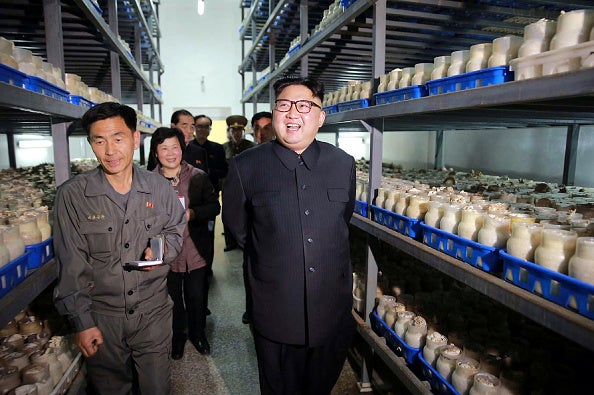 But I think we live in an age where more and more of the general population of the country recognize now that the Drive-By Media is basically a shill for the Democrat Party. And if they don’t think that, they are still arriving at the conclusion that the media is not balanced, and it isn’t fair, and it isn’t unbiased. I really believe more and more people are waking up to this. Now, there are a number of reasons for it, but not the least of which is the media itself.

It’s hard. This past year — 13, 14 months now — it’s hard to miss that there is outright hatred for Donald Trump on the part of the media. I think this has caused people to notice it more now than they ever have. Plus, there is social media that more and more people are shown examples of this stuff, in addition to the 25-30 years that we’ve been pointing this stuff out. I think we’re reaching this point. Now, we’re nowhere near overcoming it, and I don’t want anybody to misunderstand.

But I think we have reached a point where more and more people are privy to it, and I think that’s how you can end up… I mean, stop and think of it this way. The media has been on a nonstop destroy mission really since before Trump was elected, but especially since. But here’s Rasmussen out today with a 46% approval rating. Trump ought to be… If this were the media of this were the era of 2000 to 2004, Trump would be in the tens, the teens; Trump would be in the 20% approval.

Remember how long it took them to drive George Bush down to the thirties? It took them six years of relentless assaults on Bush, and it reached a feverish point with the war in Iraq, dovetailing with the War on Terror, and this is even more intense than that. This is even more pointed and more personal than that. The media’s partisanship has become more obvious because they are doing less and less to hide it now.

I think this is one of the things that continually has them off the rails is that they no longer have the universal power to bend and shape the opinions of a majority of Americans. And you know the evidence for that is they continue to send reporters out to areas of blue states that voted for Trump. After all of these months of assaulting Trump and destroying Trump, they’re looking for evidence that it’s worked, and they can’t find it.

They really are beside themselves. They are. If you read these stories, their rage is inescapable. And their rage is at the voters who should have known by now, should have seen the light by now, should have believed what the media has been inundating them with. And these people remain loyal to Trump, and so the media writes of these people as they’re the biggest fools and dunderheads on the planet. I just think we’ve reached a point where the media is no longer automatically accepted as the source authority.