RUSH: Donald Trump’s approval rating back up, zooming up to 46% in Rasmussen. Now, before you discount that, you know, I happened to mention this today to people when I found out. Because I’m a powerful and influential member of the media, I had advance notice that Rasmussen was gonna publish this result, so I’m spreading it around to some friends and buddies. They said, “Rasmussen, come on, nobody pays any attention to Rasmussen.” 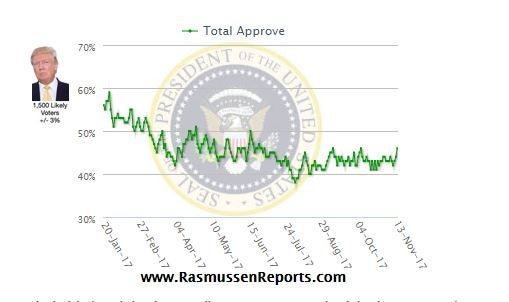 I said, “Well, you should, because they were the most accurate predictor of the presidential election in 2016.” Gallup doesn’t even do this kind of poll anymore because they were so wrong so often. Their results vacillated and spiked in different directions, that they’ve given it up. The ones you don’t need to trust, folks, are the Drive-By Media polling units. Those are the ones that are questionable. The Rasmussen result seems to be pretty solid, and obviously it’s based on substance.

Trump is killing it on this trip. And you can see this, the evidence is the way the Drive-Bys are trying to destroy him yet again on the basis of looking awkward during weird handshakes and just meaningless things like this. They’re like kids now. Well, they’ve always been like kids. But if it weren’t so damaging, I mean, it’s comical to watch this.