RUSH: Women apparently bear the heaviest brunt of global warming and are less empowered to contribute solutions. So a new action plan agreed to at the Bonn, Germany, climate talks aims to reverse this inequality, writes Hilda Heine, the president of the Marshall Islands. 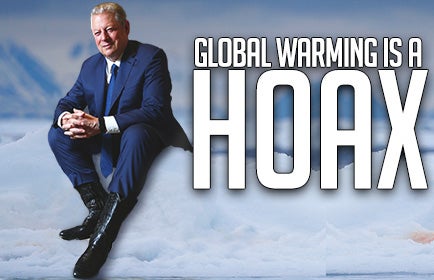 “The women the Marshall Islands bore the brunt of the long term effects of nuclear testing, and women leaders … brought these issues to the international stage. For women, fighting for justice — including climate justice –” You ever heard of climate justice? Do you have any idea what it is? You don’t. Because it’s silly.

“For women, fighting for justice – including climate justice – can be downright dangerous. Last year was one of the deadliest for women fighting on the frontlines for human rights and environmental justice. Environmental defenders are being killed at the rate of almost four a week across the world, a staggering toll that disproportionately affects female activists and indigenous leaders. Among the most high-profile cases was Honduran indigenous Lenca leader Berta Cáceres, who was murdered in 2016,” by a gust of wind. “And for every woman like Cáceres who is killed, dozens of others are threatened with violence,” of heavy rain, “or destruction,” of hailstones, “of their home or village.”

Look, I’m adding some things, but environmental injustice is murdering people? “Yet despite this perilous landscape, where corporations and even the governments who are in their pocket threaten life itself, these women continue to stand up for freedom of expression and participation, for land rights and the rights of indigenous and rural communities. For sexual and reproductive health and rights, against harassment and gender-based discrimination.” Remember, this is a climate change story, folks. “And for the right to preserve a safe, liveable environment for present and future generations.

“At the UN climate talks in Bonn, the cause of these courageous women is being amplified by a host of organisations working on gender and climate justice issues through the Women and Gender Constituency. Together they are working to raise awareness of the work already done by women on the ground to combat climate change, and also, critically, how climate policies should address their specific needs and responsibilities and ensure the realisation of their rights.

“The tragic reality of gender and climate is that women, especially women of colour,” who are hardest hit, “are disproportionately affected by the impacts of climate change, but are far less likely to be empowered to cope because they have fewer resources such as power and access to finance and technology. A multitude of structural barriers means they are far less likely to take up position of political power and decision-making.”

It’s all about the advancement of socialism and global governments and anti-freedom and liberty, anti-United States sentiments, blame the United States for all of this gender inequality and all that. Just asinine. And these people, by the way, this is the majority of thinking in the United Nations. This is how most of them think. And this is how young leftists in America, this is what they aspire to, this is the stuff that turns ’em on. This is the stuff that energizes them and activates ’em. And it is literally stupid. It’s literally devoid of any common sense.