If GOP Fails to Pass Tax Reform, Trump Won’t Be Blamed by His Voters

RUSH: So the president just left the House, Capitol Hill, after a meet-and-greet with Republicans in the House. Their vote on the Republican tax bill is scheduled soon. That vote is pending. They are awaiting it. Pelosi is now speaking against it on the floor of the House. It’s thought that it’s gonna pass the House, but when it gets over to the Senate, there are now four Republicans who have expressed concerns. And one of them is Ron Johnson who says he’s not really comfortable with the changes made on the pass-through.

Now, once again let me just undertake a brief explanation of the pass-through. It’s nothing more than small business owners being permitted by tax law to file their small business taxes on their personal income tax return. They organize themselves as Subchapter S organizations or corporations, and, as such, the new tax law would give them a tax rate of 25%, down from the maximum 35 or 39.6.

What’s changing in the Republican tax bill is a pretty dramatic rate reduction of as much as 12%. Well, not 12%, but it’s a reduction from 35 to 25 or 39.6 depending to 25. Ron Johnson’s upset with that. There are now three additional Republican senators expressing concerns about the tax bill, and not a single one of them is a surprise.

Susan Collins of Maine, Senator Jeff Flake of Arizona, and Senator Bob Corker of Tennessee, and before it’s all done we’ll be able to throw Senator McCain in this bunch.

So if the bill passes in the House, which it is expected to do, it looks like the Senate, the Republican Senate is set to torpedo this. And Senator Graham is running around saying, if this happens, if this doesn’t pass, we can say good-bye to our majorities in 2018. And he may have a point. It’s tough to forecast that far out because even if this thing goes down in flames, there are gonna be all kinds of things that we cannot predict or foretell that will happen between now and Election Day of 2018. But this will not be good.

To have once in a lifetime majorities in the House and the Senate while controlling the White House and to not be able to get anything done? The voters would be excused if they started asking themselves for the final time, “What is the point in voting Republican?” Because nothing gets done. No promises are kept. It doesn’t even look like there is an effort made to keep some of these promises, such as repealing Obamacare. And now tax reform. 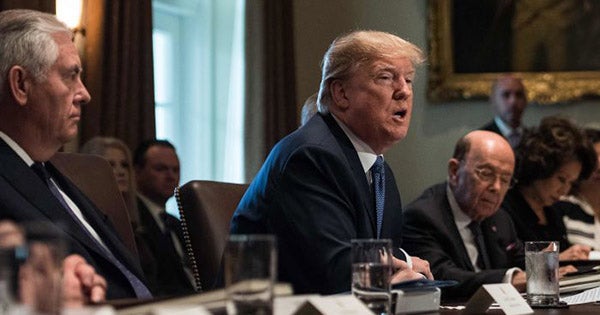 And you know what they’ll say. “Well, where was this great salesman? Where is The Art of the Deal? Where’s Trump up here persuading to us vote for this? This guy’s not what they said he was. He’s not what he said he was. This guy, he hadn’t even been on stage here.” And that’s how they’ll cover it. They’ll throw it off on Trump and try to.

The things that he can do without Congress are great and they’re showing great promise, already great results in deregulation, keeping America out of the silly United Nations schemes that intend to fleece us, like climate change and what have you. Trump will not be blamed by people that voted for him if the tax bill goes down in flames, and he will not be blamed for Obamacare’s failure, I don’t care how hard the Republicans try to blame it on him. And they most certainly will, exactly as I just told you they will.