RUSH: From the U.K. Daily Mail: “‘Crooked Hillary is the worst (and biggest) loser of all time.'” This is a Donald Trump tweet. He tells Hillary to get on with her life, as she questioned the legitimacy of the election and urges her to try again in three years.

“President Donald Trump hit out early Saturday at ‘crooked’ Hillary Clinton, his defeated election opponent. Trump called Clinton ‘the worst and biggest’ loser of all time’ for saying that his election victory has ‘lots of questions about its legitimacy.'”

Folks, do you remember how horrified Hillary pretended to be during the third and final presidential debate last October? Trump said that he would keep us in suspense about whether he’d accept the election results. That was a Chris Wallace question, I believe, and Trump said (paraphrasing), “No, I’m not gonna tell you tonight that I’ll abide by the election result. I don’t know what’s gonna happen between now and then. Have no idea what’s gonna happen.”

And you remember how the entire Drive-By Media and Democrat Party and, hell, some Republicans descended on Trump and they accused him of undermining our great and vaunted Democrat process? Donald Trump once again was posing the greatest threat to democracy that any of us had ever seen in the modern era. Because he was saying he would not accept the outcome of the election.

Trump was very smart. The reason he didn’t say anything — well, there were probably many reasons. But I’m gonna tell you one of the big reasons why, because if Trump had said, “Oh, of course, yes, I will certainly abide by the results,” the story the night of the debate would be, the headline would be: “Trump concedes election.”

If Trump had said, “Sure. If I lose, I lose. If the election shows that Hillary wins, I certainly will accept the results of the election. Absolutely.” If he’d said that, then the only news there would have been for the next two or three days, “Trump concedes defeat, Trump concedes election, Trump acknowledges impossible dream, Trump acknowledges impossible task, Trump admits can’t win.”

You get the picture. That’s what they wanted, and they didn’t get it. And they went around talking about what a great threat Trump’s refusal to acknowledge that he wouldn’t accept the results posed to our great democracy. Remember how horrified Hillary pretended to be? She actually said, “That’s horrifying.” And yet here we are a year later, and she still hasn’t accepted the results, and she’s the one undermining our democracy by claiming that it was rigged and there was cheating and that there was collusion. 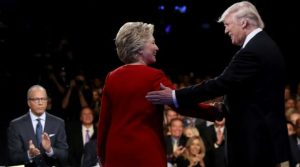 Trump tweeted on Saturday: “She just can’t stop, which is so good for the Republican Party. Hillary, get on with your life and give it another try in three years.”

You know what? I won’t be surprised if somewhere down the line she blames global warming. It’s about the only thing that she has left out.