RUSH: Did you hear what Sarah Huckabee Sanders pulled off yesterday? “What am I thankful for?” Yeah, this is great. This is absolutely great. Sarah Huckabee Sanders at the White House press briefing made every reporter stop and explain what they were thankful for. And there’s a website out there called Splinter News, a bunch of leftists that were just outraged over this. They were spitting mad over it. 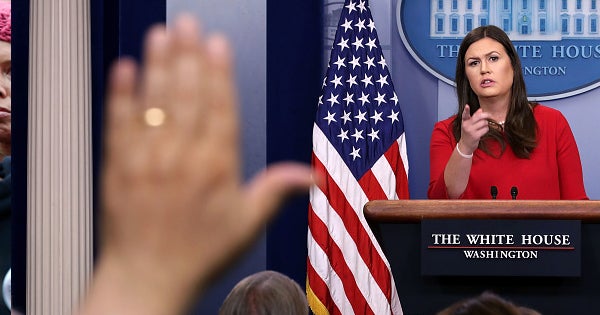 And the people here at Splinter are livid. “Sanders immediately called upon April Ryan, who, as a black woman, has been a continual target of White House press secretaries.” She’s not been a target. Hey, Splinter, April Ryan is not a target. They kiss her butt! Every press secretary since she’s been in the pressroom kisses her rear end. You know, she’s the new Helen Thomas in the White House. Don’t want to make her mad. What do you mean, target?

“To her credit, Ryan quickly responded with an appropriate level of snark, stating, ‘I’m thankful to be able to talk to you and question you every single day.’ For the rest of the briefing, other reporters then dutifully prefaced their questions with things they were grateful for: their families, the First Amendment, their colleagues, their wives … and even ‘this exercise,'” one reporter said.

“When AP’s Zeke Miller didn’t give a thanks, Sanders said, ‘you did break the rule of not offering anything that you’re thankful for,’ to laughter from the rest of the press corps. Sanders wrapped up the briefing by saying, ‘thank you for participating in this very fun exercise.'”

Now, the people at Splinter News say: “This was an intensely embarrassing display. No one should have played along with Sanders’s request. This is not a school, reporters are not children, and they do not have to acquiesce to displays of gratitude just because the White House press secretary asked them to. The knee-jerk obedience was especially humiliating given the way that the press has been treated by the Trump administration.”

Something as harmless and as innocent as this? The press are not children is news to me too. That’s exactly what they are. You know, you remember our old buddy Tony Snow, Mr. Snerdley? Tony Snow was once a guest host of this program. He was the Bret Baier of Fox News for a while. And then he became White House press secretary for George W. Bush. I’ll never forget one press briefing, they were just all over him about immigration.

Tony Snow did not believe in amnesty, but he had to speak up for it because it was the Bush administration policy. So he became the dutiful soldier, trying to extol the virtues of amnesty and illegal immigration — well, not illegal, but illegal immigrants being normalized, and some in the conservative press corps just hammered him. I mean, they just went after him tooth and nail on hypocrisy and phoniness.

And he stopped ’em one day, “Have you people ever stopped to realize where we are every day? Do you ever stop to realize how special the opportunity we all have is?” In other words, Tony Snow was in awe of being the White House press secretary, of working for a president, of having the job of press secretary, and it was something that always remained special to him. It never became humdrum routine or taken for granted.

And I think that’s what Sarah Huckabee Sanders was doing. Name something you’re thankful for. Hey, can we act like human beings today instead of programmed robots? And it doesn’t surprise me at all that some Splinter press bunch would be all upset that the reporters didn’t tell her to go take a hike.