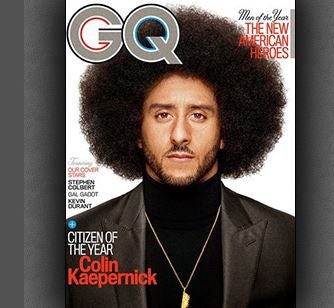 RUSH: Here’s a piece from GQ, Gentleman’s Quarterly. They just put Colin Kaepernick on their cover as Citizen of the Year, a guy who’s never voted has become Citizen of the Year at GQ, a supposed men’s fashion magazine. In fact, the way to lead into this is to share with you a tweet from Chuck You Schumer. We were talking about this earlier this week.

They’re in trouble. There’s not a whole lot going on politically they want you to talk about. They’ve got some things. They think they’re gonna run the table with Roy Moore and all of this. But there’s a huge level of discontent on the left. But it’s not universal.

There’s a tweet here from Chuck Schumer: “Bring this chart to Thanksgiving dinner. It’ll come in handy when that family member who always talks politics tells you the Republican tax bill helps the middle class.”

And he’s got a chart here from the Joint Committee on Taxation, which is a bunch of caca, showing that the Republican tax bill, House and Senate version, only cut taxes for the wealthiest Americans. It’s nowhere near the case. The wealthiest Americans are not gonna get a tax cut. Well, they’re not gonna get a rate reduction. In fact, they’re going to pay a special rate of 46% in order to make sure they don’t get a tax rate reduction. 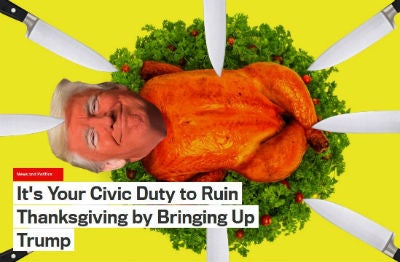 And then the GQ story, headline: “It’s Your Civic Duty to Ruin Thanksgiving by Bringing Up Trump — This Turkey Day, Consider Making Life HELL for a Few of Your Relatives. It’s late-November 2017, and you know what that means: Every man you’ve ever seen on TV for any reason has just been unmasked as a woman-hating sewer ghoul. Also, it’s time to ruin your Trump-supporting family’s Thanksgiving — for America!

“Thanksgiving is a celebration of community and gratitude, where we reconvene in our nostalgia-drenched hometowns and perform time-honored traditions such as almost sleeping with your high school crush and going around the table to say what you’re most thankful for and where you were on 9/11.”

It goes on and on to talk about what happens at Thanksgiving dinner. And then offers a few suggestions for how to ruin Thanksgiving. “Don’t show up. For some parents, your absence will speak louder than any sodden arguments over the density of pumpkin pie.” Anyway, I could go through the details, but the point is made. You have a civic duty to ruin Thanksgiving by bringing up Donald Trump and whatever else.

RUSH: I’m not gonna bother showing you the chart from Chuck Schumer on the Dittocam. Not gonna take the time and go through the trouble. I just want you to understand that it is a total lie. The way Chuck Schumer and the Democrats try to make their point with a chart that tax cuts are only going to benefit the rich, that there are no tax cuts for the middle class, the point of it is that the tax cuts are gonna sunset in 10 years. The Republicans did that in order to make the budget budget neutral.

It’s a time-honored gimmick, and it’s because of the way these things are scored by the various budget offices and so forth. They score these things in a static fashion, and so some of the tax cuts will sunset in 10 years, and because of that Schumer’s saying, “Nothing here for the middle class.” It’s a convoluted argument. The thing that you just have to realize is that no matter what is in a tax cut offered by the Republicans, the Democrats are gonna demagogue it and say it’s nothing but a tax cut for the rich and not for anybody else.

In socialism, the powerful become rich. In socialism, the great middle class has no chance to become powerful or rich, by design. And that leaves only one place for people to go to acquire power and to acquire money, and that is the government and, more importantly, running it, having control over it. And human nature being what it is, it is why socialism always ends up being a tyranny.