RUSH: Well, looky here. Al Franken has a live press conference starting here in mere moments. Thankfully, we will be in a commercial break. Huffing and Puffington Post says that Leeann Tweeden, the woman Franken harassed in the USA tour, she was asking for it. He’s not to blame.

RUSH: I can’t believe I’m saying this. We’re still waiting on Al Franken. I’ve done an informal survey of the audience, folks, and it seems that many of you are curious to hear what Stuart Smalley might have to say here. Supposed to start a press conference about six minutes ago, obviously running late in the Obama-Clinton style.

RUSH: Now, why would Franken be doing this? Up ’til now it has become clear that Franken’s gonna try to weather the storm. He has not admitted or — he’s not copped to it. He said he’s sorry, that he’s learned — you know, I get so worn out. These people insult our intelligence. “You know, I have learned that when hugging a woman, it’s not really correct to grab her breast. I’m glad to know this now at age 84, whatever I am, and I appreciate this very, very learnable opportunity.”

Well, who’s kidding who here? As though Franken’s unaware that copping a feel here or there is somehow okay and only now at this stage in his life is he learning that it may be inappropriate. Speaking of all this, by the way, in the Stack today I have a piece by Christina Hoff Sommers. She’s written against the extremes of militant feminism, and she’s extremely correct in her extreme criticisms of extreme feminism.

She has a piece today, however, that she’s worried there’s an overreaction to all of this and that certain interactions between men and women which are perfectly harmless and innocent and consensual are gonna be now considered harassed or abuse because our culture has a tendency to overreact to everything because of fear of the media, fear of political correctness and a lack of courage to stand up and proclaim common sense.

And she worries that all of this is gonna the end up having an adverse effect on the overall interaction and relationships, normal relationships and normal interactions between men and women, which are all part of the mating, courting, socialization status or apparatus of people getting to know each other. And that it’s going to lead to a lack of interaction, people afraid to speak with one another in any way, shape, manner, or form. That it’s going to potentially lead to people segregating themselves from members of the opposite sex as the only safe way to go. And the more that happens, the more segregation there is, the more people going it alone, then whenever there is interaction between a man and a woman and somebody gets unhappy about it, then it’s gonna be even worse than the allegations today.

And I understand the point. I understand it to a T, in fact. We do have this tendency to overreact, if you look at it as a perpetual motion ball that reacts and keeps going in opposite directions after it hits something and goes back. The rebound time here is way past what’s considered normal. And it can have an adverse effect. And of course this is desired by some who are basically unhappy anyway with their lot in life and want to spread their misery around by politicizing as much as they can.

Now, if Franken’s doing this because he thinks there aren’t going to be any more women coming forward, then he’ll come out here and say it’s over and he’s sorry and whatever he says to try to put it behind him, so to speak, so that he can continue. If that’s not the reason he’s doing — what other reason could there be? Could there be other women on the verge of coming forward and he needs to head ’em off at the pass? Or perhaps what he knows is coming is so bad that it can’t be survivable that he’s going to resign? (interrtupion) No. You don’t think that. You don’t care what it is, he’s not resigning? 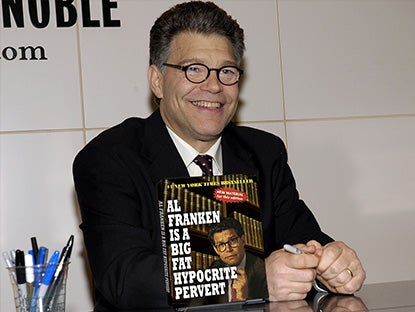 The thing about the Democrats on this, when this first happened, I thought this was pretty much gonna be automatic, that Franken has to go, because it’s the governor of Minnesota that would replace him, so they don’t lose anything if Franken goes. With Franken staying, it does give them a bit of a problem. If they want to keep going after people like Roy Moore or Trump while they are supporting Conyers and Franken and whoever else in elective politics is revealed to be one of these kind of guys, it’s gonna be an ongoing problem for them.

They must not fear the hypocrisy. The Democrats I don’t think worry about the hypocrisy at all because with the media on their side, it never sticks to them. But then there’s another factor that I saw over the weekend. I was in stunned silence. There are apparently a significant number of Democrats who really think this guy has a legitimate chance at getting the Democrat presidential nomination, and that’s why they want to save him. Al Franken!

RUSH: Here’s Stuart now. Stuart’s just shown up. We have time for a couple minutes here. That might tell us what this is about, so our cameras and microphones are there.

FRANKEN: People of Minnesota, my colleagues.

RUSH: This is so painful. I hate having to do this, but —

FRANKEN: — my staff, my supporters, and everyone who has counted on me to be a champion for women.

FRANKEN: For all of you, I just want to again say, I am sorry.

FRANKEN: I know there are no magic words that I can say to —

RUSH: Yes, there are.

FRANKEN: — regain your trust. And I know that it will —

FRANKEN: — take time. I’m ready to start that process, and starts with going back to work today, so now I’m gonna take a few questions.

REPORTER: Yeah. You said response to (unintelligible) that you remembered encounter differently —

RUSH: Can you hear these questions?

REPORTER: — does your recollection differ from the women that came forward and to what extent are you denying their accounts?

FRANKEN: Well, there are different, you know, different allegations. The Leeann Tweeden. Leeann and I were on the USO tour together.

RUSH: We know this.

RUSH: Your hands were all over here on the tour.

FRANKEN: — sketch. I said that I recalled that differently from Leeann, but I feel that you have to respect, you know, women’s experience. And so I apologized to her, and I meant it, and I was, you know, very grateful that she accepted it. As far as, you know, I take a lot of pictures in Minnesota, thousands of pictures, tens of thousands of people. So those are instances that I do not remember. It has from these stories —

RUSH: Like a pig with a stick exhibit at the state fair, right?

FRANKEN: — some women and one is too many who feel that I have done something disrespectful and have hurt them, and for that I am — I am tremendously sorry.

FRANKEN: And I know that I am —

RUSH: It’s obvious what the heck this has been.

FRANKEN: — going to have be much more conscious —

RUSH: You know, while you listen to this I’m gonna see if Apple’s released the new beta today so I will not be wasting my time.

FRANKEN: And that this — 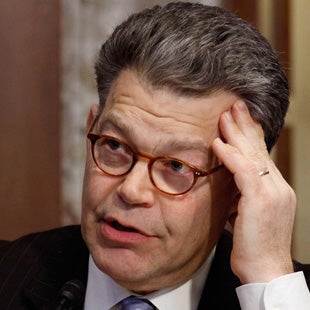 FRANKEN: That this will not happen again going forward.

FRANKEN: — long time for me to regain people’s trust but I hope that starting work today that I can start to do that. Casey.

REPORTER: You made it clear you’re not gonna resign your Senate seat. There have been a lot of accusations against a lot of people that have been in conversation lately.

RUSH: After this answer we’re gonna get out of this. We’ve been played here.

FRANKEN: — by apologizing. And by apologizing to the people I’ve let down. And I’m going to work to regain their trust. I am going to be accountable. We are going to cooperate completely with the ethics investigation. And that’s —

REPORTER: Will you make the findings of the ethics investigation public?

FRANKEN: I will be open to that. The — I — you know, that’s going to be, of course, the — I’ve not worked with the Ethics Committee before, and I don’t quite know how that works. But I’m certainly open to that. And I also — I’m going to —

FRANKEN: — try to learn from my mistakes.

RUSH: I didn’t know that you weren’t supposed to grab a woman’s butt during a photo-op.

FRANKEN: — doing a lot of reflecting, and I — I want to be someone who adds something to this conversation. And I — I — I hope I — I can do that.

REPORTER: You were unable to answer the question of whether more women will be coming out with allegations. Does that mean that (unintelligible) only you can answer. What is the reason, can you tell us, that you can’t definitively say —

RUSH: Okay, look, folks, we have to go a commercial break which will be infinitely more interesting than what we just heard.

RUSH: Well, this is basically an up-yours press conference. Screw you. And he just wanted to say it for the cameras and microphones instead of a statement. But I’m gonna tell you how much of an act this was. This guy, for whatever else he is, is a 40-year veteran of being on TV and in movies and so forth, and he does not speak like he spoke in this thing. “Uh… Uh… Um… I… I…” trying to act contrite and trying to act sorry and thoughtful.

The whole thing is an act, but its purpose was to shut down any of this talk that he’s going anywhere, no matter what happens next, no matter who next, if there’s any next, he’s not going anywhere. There was nothing new here. He’s made his statements to Minnesota media and so forth. So this was a performance designed to create this image of contrition and contemplation and serious consideration of how to behave in the future and all that. It’s pure caca, if you ask me.