RUSH: The Consumer Financial Protection Bureau. This is another little liberal enclave that was established by liberal Democrats, including Elizabeth Warren, that was set up as an agency that was unaccountable to anyone. It even had a budget that was unaccountable to the U.S. budget. Barney Frank and Chris Dodd set this thing up and Elizabeth Warren was the real driver of this particular organization, the Consumer Financial Protection Bureau.

I went through yesterday a number of descriptions of what it is and how it was set up, but let me just boil it down to the bare essence. The Consumer Financial Protection Bureau was an independent agency set up in violation of Article 2 of the United States Constitution, which allowed the Democrats to have oversight over the financial industry in America, lending institutions, banks, and you name it. And they were under the guise of protecting consumers.

But that’s not what this organization did. What this organization did was launder money. It was nothing more than a money-laundering scheme. And it had another purpose. The fines that it levied for anti-consumer policies and anti-consumer behavior at these banks, what do you think they did with the money? The CFPB was a pass-through, and the fine money was given to Planned Parenthood, the National Organization for Women, or take your pick of any left-wing activist group.

This was an independent agency set up to be able to legally get money from the financial industry and then turn around and give it to left-wing activist groups. And that’s what they were doing with it. And that’s why they are so desperate to hold on to it. The point is, it’s unconstitutional, and that’s the only thing that matters. 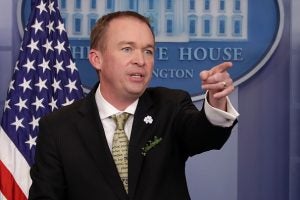 You know, the left is caught here. Because as the controversy has arisen over should it be Mick Mulvaney, Trump’s guy that runs this, or should it remain Richard Cordray, he was the director. And the way this thing was set up, the director gets to name his successor. Congress cannot pass a law like this. That’s unconstitutional. The thing wouldn’t survive five minutes at the Supreme Court.

The left knows it. Political pressure being brought to bear, and the way they’re doing that is trying to discuss the importance of the Consumer Financial Protection Bureau and what it does and why it’s necessary and what happened before it existed and the great things that have happened — none of that matters. Whatever it’s doing doesn’t matter. The only thing that matters is whether or not the Congress can establish an agency like this that is unaccountable to anybody, that violates Article 2 of the Constitution.

There’s something called the Federal Vacancies Reform Act which allows the president, who runs the executive branch, to appoint successors to people in federal agencies under the executive branch umbrella leaving. This thing was set up to be an independent agency accountable to no one. Its very existence is unconstitutional. The left knows it. That’s why they’re hell-bent, Cordray named this Leandra English to succeed him.

They want to keep this totally under Democrat liberal control so they can continue to use it to launder money and to be as a pass-through. And, by the way, it’s not the only organization doing this. Remember the scandal that was discovered, the Obama administration on many of the DOJ fines against culprits, that money was being sent to left-wing activist groups. It’s no different, folks, in practice, from Obama’s stimulus. Obama announces a stimulus of basically $800 billion, ostensibly to build roads and bridges. But that didn’t happen, did it? Where’d the money go?

The money went to unions. The money went to states and teachers and union members to keep them employed during the Great Recession. The reason for that is, those people need to be employed in order to pay union dues. Union dues are collected from what they make and are sent in a circuitous route back to the Democrat Party in the form of campaign donations. So the stimulus was a substitute for Obama walking over to the Treasury and writing a check for $800 billion to the Democrat National Committee.

Instead, you go through the motions of setting up this gigantic economic stimulus designed to fix roads and bridges and build schools, but you don’t do that. You give the lion’s share of the money to unions, which are then gonna give a percentage of that money right back to the Democrat Party. Same thing here with this phony baloney agency.

“Research of donor records maintained by the Center for Responsive Politics revealed that Hillary Rodham Clinton was the dominant recipient of tens of thousands of dollars from CFPB workers, followed by President Obama and Sen. Elizabeth Warren, who had a huge role in creating the agency.”

That does not include the fines that the CPFB has incurred and levied against institutions, and that money is then given to left-wing activist groups. The whole thing’s a sham, folks, under the guise of protecting consumers from evil corporations who want to ruin them.