RUSH: Here is Wolf Blitzer, ladies and gentlemen, last night, CNN’s The Situation Room. Wolf Blitzer and Dana Bash are discussing this horrible thing, this sexual harassment business, and it seems to be the Democrats are dropping like flies. Listen to this.

BASH: There are some Democrats I’ve talked to who fear just that, that they are losing the moral high ground. We’ll see what other shoes drop, because it’s hard to imagine there won’t be more.

RUSH: ‘Cause nobody knew about Matt Lauer last night when this happened. But how about these people thinking they own the moral high ground. See, this is the great contradiction. They have the practitioners. They are legion on their side, the sexual harassers, the abusers, and they have celebrated them, they turn them into stars and lions of the party. They put them at the top of the resume ladder. And here’s Wolf Blitzer, “The Democrats in danger of losing the moral high ground here, Al Franken.”

And I’m telling you, the fact that Trump is still — it’s like this headline: “Members Of Congress And Media ‘Stunned’ That Trump Is Still Standing And Fighting Back.” As each one of their flies drop, Matt Lauer and now Garrison Keillor, they can’t believe it. Here’s Gloria Borger just moments ago with Wolf Blitzer on CNN. 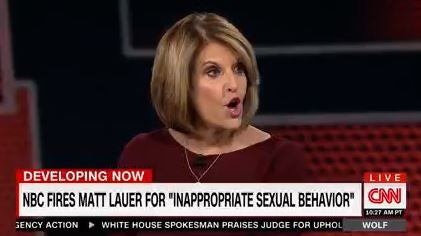 BORGER: You have Donald Trump tweeting about this this morning because he can tweet about the mainstream media and he doesn’t like NBC just like he doesn’t like us. But it’s as if he believes that he’s got this bullet proof vest around him. And he is tweeting about this and seems to forget that in fact, he was accused of sexual impropriety by more than a dozen women during the campaign. And yes, he got elected and we all understand that, but he is somebody who had denied those charges but I’m wondering now whether in his own case and the fact that he’s out there being a pundit on this stuff, whether he’s going to have to deal with this again personally. I mean, we just don’t know.

There’s your translation. And pretty much that would hold up for the entire Drive-By Media. Thank you, Gloria Borger. Savannah Guthrie. We got time for this? Audio sound bite number three. Guthrie says she didn’t know and that she’s heartbroken for her brave colleague who accused Matt Lauer.

GUTHRIE: We do not know more than what I just shared with you. But we will be covering this story as reporters, as journalists. I’m heartbroken for Matt. He is my dear, dear friend and my partner, and he has been loved by many —

Matt didn’t really do this? A virus got hold of him? Maybe aliens landed and infected his brain somehow? Well, yeah. He was possessed. So Savannah Guthrie’s heartbroken for everybody involved. Didn’t know any of it was going on. I don’t know. Look. It’s probably a good thing I have a break here because of the Gloria Borger translation.

RUSH: Go back to Savannah Guthrie. I’m not gonna play the sound bite. Grab number five. But Savannah Guthrie says (paraphrased), “You know, we just don’t know more than what I just shared with you. (sobbing) But we will be covering story as reporters and journalists, ’cause journalists are wonderful people. And we’re journalists. And we’re really important! So we’re gonna be covering what happened to our friend here, and it’s really bad what happened to Matt. (sniffles) I feel so bad, so heartbroken for Matt! Oh, what happened to Matt, my dear friend! My friend and partner.

“He is beloved by many, many people here. It’s a sad thing what happened to him!” What do you mean, what “happened” to him? “I’m heartbroken for the brave colleague who came forward to tell her story and other women who may have their own stories…” That means there’s gonna be more. Wouldn’t you agree, Mr. Snerdley, that that means that? “We are grappling with a dilemma that so many people have faced these weeks, how you reconcile your love for someone with a revelation that they behaved?”

Let me tell you what… Savannah, let me tell you what everybody knows. We all know how the drill works here. Matt Lauer is gonna be back in the Drive-By Media inside of a year, and so is Charlie Rose. If Charlie isn’t, it’s gonna be an age thing. But Matt Lauer’s gonna be back. Just like Brian Williams was back after six months sabbatical at home. I’m waiting for Brian Williams to say that Matt Lauer harassed him. You know, Brian likes to be in every news story. But we all know the drill here. This isn’t permanent.

These people circle the wagons. You know, Dan Rather is still out there putzing around doing news stories. There’s always gonna be somebody somewhere in the Drive-By Media who will look past all this, and Matt Lauer will be hired somewhere. I don’t know that Bill O’Reilly will, but Matt Lauer will. Safe to say? So (sobbing), “Yeah, I feel so bad! I feel so bad.” But don’t. ‘Cause, you know, you just have to go through the role here. You got to play the game. Okay, so you’re trying to get Trump on this stuff (chuckling) and the wrong people keep showing up.

You gotta dump ’em. “It’s the price that we pay to get Trump.” In fact, we have a caller coming up with an interesting perspective on all of this. Mr. Snerdley, does the caller think this is a conspiracy? (interruption) Well, the caller thinks that all these people are dropping like flies and that all of us are reacting, “Yeah, damn right! This is reprehensible. You should go. We have no tolerance. You get out of there.” And then when they finally get Trump, for us to be consistent we’re gonna say, “Well, yeah, that’s horrible! Trump, you gotta go.”

Even now, with the Drive-Bys reeling, there are people on our side who think they are infallible. How about Megyn Kelly to replace Matt Lauer? That was my first thought this morning when I first heard this. There’s no faster way to rehab her. (interruption) What? (interruption) Who? Who? (interruption) Forget that. I’m thinking NBC management. They’ve got the Today show here they gotta worry about here. This is there number one male anchor that’s down for the count here. They hired Megyn Kelly to be their up-and-coming star, the new whatever face of NBC, and it’s not worked so far.

But what if in the midst of all of this attention they plop her in there next to Savannah Guthrie? (interruption) Do not rule this out! Do not. It’s exactly the kind of play that Andy Lack and these guys that run that place would be thinking about. They’d be thinking about it from the standpoint of rehabbing her image, give her the top slot there — well, next to Savannah. It would be a statement that NBC’s making that she has earned it, is qualified for it, they’re willing to invest in it, and if it made Savannah and Hoda quit, well, who knows?

If there’s a cat fight over this, even better! (interruption) Nah, they don’t want to bring back Bryant Gumbel. Bryant Gumbel’s happy over there at Real Sports at HBO. No, no. HBO is it’s own enclave of wacko leftists. I mean, that place is gone, in terms of their produced news-type programming. Yeah, yeah. But I can see ’em putting Megyn Kelly in there. I’m not predicting it, but I’m just telling you if they did it I would not be surprised. (interruption)

(sigh) I don’t know she’d do a show with all the accusers for Lauer. Depends on how many of ’em show up. Depends on how much NBC thinks they could gain by doing that, versus how much they might lose by doing that. Anyway, here’s Brian Stelter now. Now, Guthrie said she didn’t know anything about this. She didn’t know and she was heartbroken for her brave colleague. But Brian Stelter on CNN this morning had this to say… 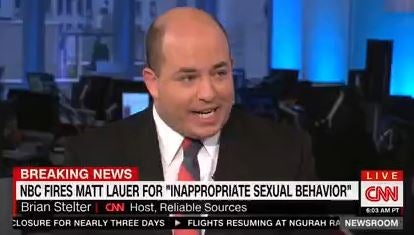 STELTER: When I watched that broadcast, I was thinking to myself, “This is an awkward situation for Lauer and his cohost, Savannah Guthrie, because both of them knew that these stories were in the works. Uh, their colleagues have been getting phone calls from reporters who had been investigating Lauer’s history.” So NBC was in a very delicate situation here. They say they had never received any formal complaints about Lauer. But they knew reporters were digging, looking into his past. So they kept him on the air until Tuesday morning.

RUSH: See, this is further evidence that they knew. What Brian Stelter is saying here is that all these NBC people were getting called by reporters, “Hey, we hear that Matt Lauer X, Matt Lauer Y, Matt Lauer Z.” “I don’t know! I don’t know!” So they knew. You know what I wonder? You know, I’m watching all these cable networks. Like on CNN today, every female anchorette has done the Matt Lauer story, and I wonder that’s really going through their minds as they do the story.

They’re reading the prompters and they’re putting on the appropriate facial expression as dictated by the prompter and the director. But I wonder what they’re really thinking. Are they crestfallen? Are they heartbroken that one of the icons of the liberal media is gone? Or are they secretly happy that it’s an opening that now may free them up or others for upward mobility job-wise? If you’re at CNN, would you rather be working at NBC News or CNN? Are you happy to see a competitor fall, or are you worried that the leftist Drive-By Media is taking a big hit and you’d really rather not have to report on this?

I wonder what really goes on through their minds, and particularly the women. Because the women have to stand together in solidarity against this kind of male predatory behavior. And before they knew… I mean, Matt Lauer? I mean, he was probably a big shot, great guy, widely admired and looked up to. So many bubbles are bursting here. So many images are being shot to smithereens.

JOHN BERMAN: The President of the United States has been accused by 13 women, 12 named, one anonymous, of various forms of sexual misconduct. And now we are seeing consequences for Matt Lauer, for Charlie Rose. There will be consequences for Harvey Weinstein and for others. Yet, you know, not for Donald J. Trump.

BIANNA GOLODRYGA: What a pivotal time it is to be a president when you really have seen a sea change, and he can be participating in leading this discussion. Instead, we’re reading reports that he’s denying what he even admitted to with the Access Hollywood tape. So it does seem a bit surreal that the leader of the country does not seem to be in lockstep with at least corporate America.

RUSH: Doesn’t seem to be in lockstep with the rest of the corporate America? You’re just mad that the guy hasn’t been held accountable like you tried to make him held accountable and yet all your buddies are dropping like flies. Did it ever occur to you that maybe the Trump women are making it up? Did it ever occur to you that all Trump’s ever done is talk about this stuff?