The Left Erased Morality and Created a Culture of Depravity

RUSH: I want to address something here seriously. Nancy Pelosi, predictably, blamed all of this on Trump.

Grab sound bite 23. I want you to hear it again. Just 15 seconds. After suggesting that Conyers should resign, she realized she stepped in it. She realized that’s a very, very controversial thing to do, so she had to try to soften it at the end of the presser.

PELOSI: There’s a new day. And the courage of the women coming forward is something that is making a big difference. But also the attitude in the country, which I think some of it springs from the election of Donald Trump as president.

RUSH: So some of it springs from the election of Donald Trump. So the reason why our party is in so much trouble is the election of Donald Trump. Now, to a certain extent, that’s true. Donald Trump has driven them crazy. But they were losing elections in great numbers before Trump came along. We’ve documented this, talked about it a lot. The Democrats have been in trouble for a long, long time. The thing that masked it was that Obama was in the White House, and moving his agenda forward.

But out there, all across the fruited plain, the Democrat Party has been imploding. And in their worldview, yeah, the election of Trump does spell big trouble. But that’s not what she means. She is trying to say here that all of these Democrat guys — the news, the talent, the news readers, the executives, the producers, Hollywood, all of these people — caught up in these sexual harassment charges and allegations is really because Trump was elected. And she’s attempting to say Trump is this ignoramus, and he’s this barbarian. He’s unsophisticated, and of course that is influencing our culture and behavior.

And I want to seriously tackle this because that’s not at all what’s going on in America today. Back in 1987 when I was in Sacramento I wrote a weekly newspaper column for a local paper. I had writers block one day and I literally could not think of anything to write about. So as a means of trying to overcome it, I started writing down one-sentence thoughts hoping that one of them or two would inspire me into a column idea.

And after I got to about 15 of them, I said, “You know what? This is the column.” Because I was writing sentences that were pithy little philosophical things that I agreed with, that I thought were correct, and they became the 35 Undeniable Truths of Life. I kept going and writing enough of them to get to 750 words, which is your average column length, and then it became known as the 35 Undeniable Truths of Life.

For example, number 24 was, “Feminism was established so as to allow unattractive women easier access to the mainstream of society.” And it was true then, it’s true now. It’s one of the main drivers of militant feminism, not the only, but it’s a significant player. There was another one that I wrote. “Morality is not defined by individual choice.” That’s all it was. Simple little statement, because even in 1987, I mean, we were coming out of the AIDS scare. Well, weren’t coming out of it; were smack-dab in the middle of it, and it was all Reagan’s fault, if you remember, because Reagan wasn’t talking about it.

And it’s kind of like pornography. You may have trouble defining it, but you know it when you see it. Same thing with morality and immorality. You may have trouble defining it for people, but you know immorality and ill-mannered behavior when you see it. And we raise our children to be moral and well mannered. If we don’t, there’s no telling what individuals are gonna turn out to be. Human beings need to be taught, need to be raised, need to be instructed.

If you have a kid at the dinner table that interrupts people constantly or throws food, you stop ’em and you tell ’em that’s wrong. If they refuse to get the message, you punish them. If they engage in behavior that is harmful to others or themselves, you stop them and tell them and you raise them. You try to raise them with good manners and self-respect, respect for others. And at some point, all of this evolves into you teaching them morality, right and wrong.

Well, for the last 50 years if not longer, there’s been an attack on that whole premise of right and wrong and who gets to define it. And the left has lived and died with the premise that nobody but they or them get to define it, and it’s an individual choice. Until you walk in the shoes of a liberal, you have no right to judge. You have no right to say what’s right and wrong. And so the offshoot of this is that whatever liberals wanted to do was moral because they wanted to do it. And anybody that came along and judged them and disapproved was attacked.

And it begot the culture war. The culture war is largely over morality, the concepts of right and wrong and whether or not they’re universal or the result of individual choice. And the left has always believed that morality is an individual choice, that you don’t get to define it for anybody else, and neither does society. And that attitude is what I believe has led us to today.

There are consequences for all actions and inactions, and bad behavior, immoral behavior, incorrect behavior is always going to carry a price at some point. There will always be consequences for it. How do you explain all of these wealthy men? Matt Lauer reputedly making $25 million a year. Harvey Weinstein, multi, multimillionaire. All of these people involved have incredible wealth.

They also had positions of power where there was nobody that could tell ’em what they could do and couldn’t do. And when they did behave badly, there was no punishment. Everybody got out of the way. Everybody was afraid of them. What lessons were they taught? I suggest to you none. They clearly didn’t have any conscience — or, if they did, they were able to override it and subordinate it to their personal desires. 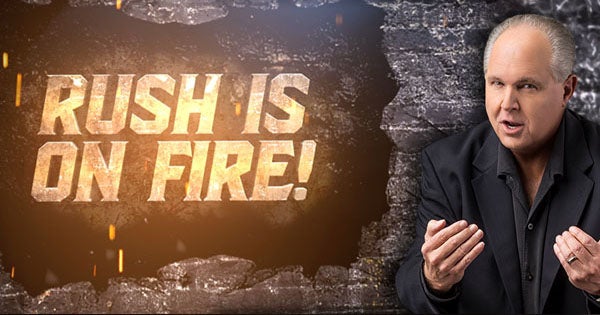 But this is why we’re where we are. And of course the people who advocate for morality and attempt to instill and live by concepts of right and wrong are mocked and laughed at and made fun of. And they’re considered to be very dull and boring. And they’re usually religious, and that means we can really attack them. And they just do that because they’re so boring, nobody would want to have sex with them anyway, and nobody would want to hang around with ’em anyway. Nobody would want to have fun with ’em anyway. They’re so dull and boring that they give themselves self-respect by telling themselves they’re good people.

And the liberals just roll right over them with this idea that they are the oddballs, that they’re the kooks, that they pose the threat, because they are attempting to impose their morality on everybody. Much like the left accuses the United States of trying to “impose” freedom on the rest of the world. Freedom is not an imposition. Morality could be, depending on your proclivities.

But I really think this is the root of it here, folks. It’s taken a little while here, but the people who are being discovered to have engaged in this behavior — which is clearly reprehensible and perverted and whatever description you want to come up with — no doubt are of the belief that morality doesn’t apply to them and that it’s nobody’s business anyway.

RUSH: Cal Thomas has a piece today, “The Value of High Moral Standards Has Never Been More Apparent.” Who decided traditional virtues were no longer viable? Somebody do a study. Find people who are being damaged. Are they being taught too much virtue? When did this happen? he asks.