RUSH:  Everybody thinks the immigration news today is worthy of bombshell, and it’s big: Trump’s meeting with everybody talking about what to do with the DACA, the DREAMers.  But that’s not the bombshell news today. 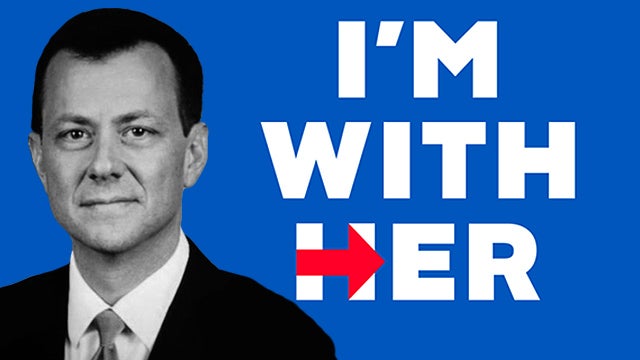 The bombshell news today that is not being discussed anywhere in the Drive-By Media, there has been further examination of the texts sent between the FBI agent Peter Strzok and his paramour, Lisa Page, the woman with whom he was having an affair.  And this examination of their texts makes it look almost conclusively like they were leaking FBI material to the media.

Peter Strzok and Lisa Page are two of the deep state sources planting lies and false stories in the Wall Street Journal and other places.  That’s the bombshell news today.

RUSH: There’s other big news in the hour, and that is that Senator Feinstein, fresh off being shown all kinds of respect by President Trump, fresh off of being treated as nicely as any Republican’s ever treated her, Dianne Feinstein has released the transcript of Glenn Simpson’s closed-door testimony, Fusion GPS, to the Senate Intelligence Committee. This is being reported as Feinstein defies GOP, releases Fusion GPS secret testimony.

According to reports, Glenn Simpson of Fusion GPS claimed that one of Steele’s sources has already been killed. According to private testimony from Glenn Simpson who used to work at the Wall Street Journal and now started Fusion GPS, Fusion GPS is, again, the company that Hillary turned to to have the phony Trump dossier written and composed. And they turned to Christopher Steele, a British intelligence agent, to do it.

It’s all fabrications. It’s all lies. Well, apparently Glenn Simpson in private, closed-door testimony testified that one of Steele’s sources has already been killed. This is the first I’ve heard of that. If there had been a source associated with this killed, do you think they would have kept that under wraps? Well, it depends on who did it, right, Putin or Hillary.

Since we’ve got that, let me go into detail here on what I think prior to this presidential meeting today that was televised, the big news of the day, is this: “Republican-led House and Senate committees are investigating whether leaders of the Russia counterintelligence investigation had contacts with the news media that resulted in improper leaks, prompted in part by text messages amongst senior FBI officials mentioning specific reporters, news organizations and articles.”

In one exchange, Peter Strzok, who was high in the chain of command with the FBI, was having an affair with another FBI agent, Lisa Page, and they were texting back and forth. It was Strzok who said (paraphrasing), “You know what, Page? I don’t believe you that Trump can’t win. We need an insurance policy.”

And everybody wondered what the insurance policy is. The insurance policy is this renegade investigation. So in an exchange of text messages between Strzok and his paramour, Lisa Page, they suggested they knew in advance about an article in the Wall Street Journal and that they would have to fake stumbling onto the story so it could be shared with colleagues.

“Boy, that was fast”? What else could that mean but that these two were leaking FBI material to the Wall Street Journal!  They leak it out, and the Journal runs with it and does a story, and these two are marveling at it.  “Boy, that was fast.”  The story’s already out. “Should I ‘find it’…?”  The “find it” is in quotes, by the way.  “Should I ‘find it,'” meaning, hould I fake like I didn’t know anything was coming and I just saw it, “and tell the team?”  It is clear they’re behind whatever news is in this story.  They leaked it, which is a violation of every law governing their conduct and their work at the FBI.

These people are working at the FBI, and they have insinuated themselves into a presidential campaign for the express purpose of harming one of the candidates.  This is blockbuster stuff!  Now, it’s nothing we haven’t suspected.  This is more evidence of it! “The text messages, which were reviewed by The Hill, show the two FBI agents discussed how they might make it appear they innocently discovered the article, such as through Google News alerts.

“‘I can get it like I do every other article that hits any Google News alerts, seriously,’ Strzok wrote, adding he didn’t want his team hearing about the article ‘from someone else.'” Now, what else could this mean except that Strzok wanted to pretend he had just stumbled across the news, even though he had been the one to plant it?  He and his paramour planted news with the Wall Street Journal, and they’re conjuring and concocting ways to act surprised by it.  “Should I ‘find it,'” quote-unquote, “and tell the team?”

(paraphrased) I can say I got it like I get every other article, a Google News alert.  Yeah, I’ll tell ’em that.  They’re trying to hide the fact they planted the details of the story.  “The Hill reviewed nearly three dozen texts in which the two agents discussed articles, tried to track down information about a specific … reporter or opined about leaked information in stories that they fretted were ‘super specific.’ … The two agents also spent extensive time shortly before the 2016 election trying to track down information … about the New York Times reporter Matt Apuzzo, who has reported on numerous developments in the Russia case.”

They were trying to find reporters to plant stories with.  To me, before the DACA meeting, this was the news of the day.  But before the DACA thing, they were talking about the Wolff book and Oprah, you know, as the new Democrat savior.  So we’ll see if this DACA thing takes the Wolff book off the top of the lead for a while.  Feinstein releasing the Fusion GPS testimony has also got the media all excited too.  So there’s a lot buzzing, folks.  There’s a lot happening out there.