Former Liberal: We Learn to Hate Ourselves

RUSH: Zack in Sanford, Florida. Zack’s been waiting a long time. I appreciate your patience, Zack. How are you?

CALLER: Thank you for everything you do.

RUSH: Oh, we just lost his line. But, you know, that’s a great point. Do you have his number by any chance? Did you hear what he said there? “We learn how to hate ourselves…” He’s talking about what he has seen, how history education has degenerated. He called it “nothing more than a funneled process of victimization. We learn how to hate ourselves,” and that is so right! Part and parcel of being one of these leftist victims — particularly a college student snowflake — is self-loathing.

And you know when people throw the term around, everybody knows what it means. Hating yourself. People ask, “How…? What do you…? It doesn’t make any sense. Why do you think these people hate themselves?” It’s not that they hate themselves. It’s that they’ve been taught how rotten their country is, and they then think they bear responsibility because they are Americans! That’s where the phrase “Not in My Name” comes from.

Martin Sheen, I’ll never forget, used it all the time when he would go out on cold nights in Washington and kick homeless people off of their sewer grates and sleep on the sewer grate himself to show solidarity with the homeless. The media would show up, because he was doing a great humanitarian thing. He was kicked homeless people off of their one source of warmth and taking it for himself to generate sympathy and how much he cared.

So he calls it “a funneled process of victimization. We learn how to hate ourselves and” become victims, and that’s just the starting point. Then it descends even further, the history education, into what the transgressions and the grievances this country has committed to unfortunate people around the world. This is best illustrated — to show you how this evolution’s taken place — by this observation: You go back to World War II. Now, granted, in the 1940s, we were not (and never have been, by the way) 100% unified.

It’s never been the case since the days of the founding, pre-Constitution, pre-Declaration, post-Declaration, post-Constitution. We’ve never been perfectly unified. But throughout history, there have been events that caused us to all bind together. World War II was one of those, and what was it? What was the bond? What was the thing that caused everybody to come together to win that war, both in Japan and in Europe? What it was, was the country.

We were all proud Americans and we were proud to be on the team. We were honored. It was something special to be an American. It was something you celebrated and you did not take for granted, and it’s something you wished for as many as possible: The American way of life. It’s what kept everyone bound together. Well, we don’t have that anymore. I dare say that, should there be any event requiring America to come together, what is it that we all have in common anymore? You can find it back in World War II. 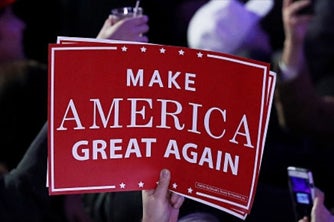 So now try to even get back to where we have something as Americans in common, just one thing that would unite us in circumstances of need. We may not even have it anymore. And when people try to rediscover it, recreate it, it’s mocked as populism or nationalism, as backward thinking, as neophyte.

The new way is globalism. The new way is not loving your country. That’s so, so yesterday. And a lot of this has been accomplished on campus with our illustrious faculty and their marvelous instruction of young skulls full of mush.