The Drive-Bys on Rush, Trump and DACA

RUSH: Now, let’s move on to something else.  Many, many other things are happening out there.  And of course it was the weekend, and that means that your host figured prominently in various appearances where I didn’t show up in the Drive-By Media.  First, CNN’s New Day this morning, Chris “Fredo” Cuomo speaking with the associate editor at Real Clear Politics, A.B. Stoddard.  This is about the DACA deal.  Fredo says, “What are the prospects for the DACA deal?  What’s gonna happen here?” 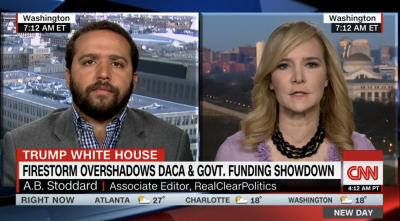 STODDARD:  It’s really hard to believe that it wasn’t a naked base play.  I think it buys some time and he thinks he can play this sort of immigration hawk thing. Keep the base happy, respond to the criticism from Rush Limbaugh and on and on, and get back in his corner.  I think there’s absolutely a chance he comes back into the middle again.  You never know what side he’s on.  They’re gonna do an extension this week and punt this whole thing, umm, for another two weeks.  It allowed him some time with this quote ruling to let these people be safe from deportation like he roars like the, y’know, uh, wall builder he once was on the campaign.

RUSH:  Want me to translate that?  What A.B. Stoddard is saying is that Trump has no intention of deporting the DREAMers. He has every intention of continuing Obama’s deal but having Congress do it, because Obama’s deal was unconstitutional.  The whole DREAMer, DACA thing was unconstitutional and it’s on that basis that Trump has canceled it, pending Congress coming up with their own legislation to deal with it.

And a federal judge — a Never Trumper federal judge — has told Trump he can’t do it, and she’s saying that Trump likes that. Trump likes the fact that this is delayed ’cause he didn’t want to kick them out of the country and all of this talk about these countries being hellholes and stuff and talking tough on DACA, that’s just to placate people like me and other people who believe Trump meant it when he was anti-illegal immigration during the campaign.

And we believed Trump meant it when he said he was gonna build a wall. He’s just buy time here. He’s trying to keep people like me from yipping at him too much. But as time goes by, Trump’s gonna basically just do what Obama did and the DREAMers are gonna be immortalized forever and all time.  It’s just a matter of Trump has to play this game. While he’s gonna do that, he has to make me and others think that he’s still a hardliner on this stuff.

In fact, he may have even called these places the hellholes, the comment there, to placate Trump supporters because it’s well known in the Drive-Bys that a lot of people agreed with Trump.  I did an informal survey. I played golf Saturday too.  And believe me, this is a diverse group of people, and they’re all the achieved.  They’re all either still working or retired, and they’re all corporate at the highest levels.  So I just took an informal survey at breakfast.

I said, “Look, with no bias in the question, with no wrong answer, can any of you tell me if you were distressed for any reason over Trump’s references to African countries, whatever, what he said?”  And not a single one of them did. We’re talking double-digit numbers here. Not a single one of them had a problem with it and, in fact, all of them supported it.  And, frankly, it surprised me.  I thought there would be at least one or two who would say, “I think it’s unpresidential.  I don’t disagree with the sentiment, but I just can’t believe that he say these kinds of things at people.”  But I didn’t even get that.  I got unilateral agreement. 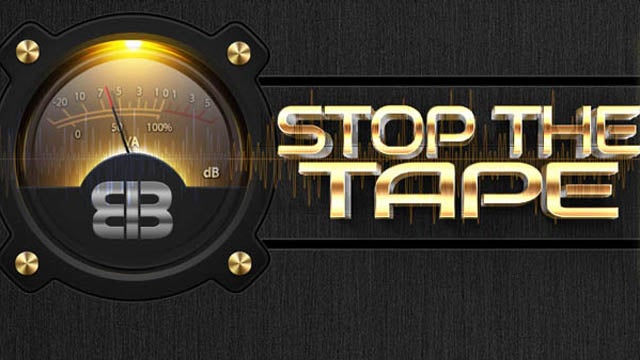 And it’s not because they’re afraid of me. They’re not afraid I’m gonna go here and expose them on the radio. They know I don’t do that. I didn’t get one. Now, this is anecdotal. I’m not saying it’s scientific or representative of anything. I’m just saying I could not find anybody that was — and you look, Anderson Cooper was near tears. And Brian Stelter could barely contain himself. And these CNN people were stuttering and they were preening as moral superiorists like it was the absolute almost worst thing they’d ever heard and it just offends me.

These people talk this way every day to themselves talking about us. They think Mississippi is a hellhole. They think Alabama’s a hellhole. They think flyover country is for bitter clinger redneck reprobates. They talk this way all the time. I don’t think Anderson Cooper almost crying was genuine. I don’t even think these people are news anchors. I think they are actors. I actually now believe that not only is the daily so-called news a soap opera, but the journalists reporting it on television are actors. And the White House press corps, the reason they want the cameras in there, they are actors. Anderson Cooper learned how to fake the near tears.

I just can’t believe that somebody is so naive to believe that people don’t talk that way, especially when they idolize people like LBJ. You know, there was a story in The Atlantic in 2016 by Jeffrey Goldberg, and it was entitled, “The Obama Doctrine.” And the four-letter word for excrement appears in this story nine times. Nine times Obama uses the term. And in one instance in this story, Barack Hussein Obama, the hero of refinement and sophistication and temperament to all of these people on the left, refers to Libya as an excrement show. He refers to a country, not as an excrement hole, but as an excrement show.

Nine times you find that word in this Atlantic story, and I don’t remember anybody being upset about the way the president was speaking. “It’s so demeaning. We don’t want presidents talking this way.” Nine times. I searched the word, keyword searched the word. Five of ’em, I think, were in one paragraph. So basically Trump doesn’t mean any of this. He’s just trying to keep me and other critics at bay while he actually prepares to not build a wall and to authorize the continuance of essentially the Obama policy on the DREAMers.

BRIAN MANN: This controversial idea that immigrants from Africa and some other parts of the world are undesirable and the president was right to say so out loud echoed widely across conservative-leaning outlets popular with Trump’s base, on websites like The Daily Caller and Breitbart and also on Rush Limbaugh’s radio show.

RUSH ARCHIVE: Forget the words used. The question was, why do you people on the Democrat side want to continue to bring people to this country that are not going to benefit this country? Why, instead, do you not want to bring the best and brightest of the world to this country?

BRIAN MANN: It’s important to remember that it didn’t used to be this way. There was a time when Americans mostly saw the same political events portrayed in the same way. So this week, millions of Americans heard trusted media figures — journalists, writers, news anchors — describe the president as vulgar, offensive, even racist and bigoted. Meanwhile, millions of other Americans opted for equally trusted media who described Trump as plainspoken, a truth-teller willing to violate the norms of political correctness.

RUSH: So, you see, NPR has to explain to its audience what its audience does not know, and that is that there is a segment of society that was not offended by Trump’s butthole comments. And then he lamented, did you catch, there used to be a day when this wasn’t so. “It’s important to remember that it didn’t used to be this way. There was a time when Americans mostly saw the same political events.” Yeah, back when the left had a monopoly on the news. But that monopoly was effectively blown up on August 1st 1988 when this program began and then all the other conservative media that came after.

So now there is a full-fledged, legitimate and credible conservative media that the people that listen to NPR do not watch or listen to and therefore they don’t know. That’s why NPR has gotta tell ’em. But we do know what they are seeing. We are curious. We want to know all sides. They are not. There is no legitimate point of view other than their own. I find it comical. And they constantly use me to explain to their audience what real America thinks. It’s an honor, truly indeed, in all four corners of the world I am now, including at NPR.

RUSH: Now, here’s an example of what NPR was talking about. We now go to Fox & Friends weekend, the cohost Pete Hegseth played a clip of your host — that would be me — discussing media coverage of Trump’s excrement hole countries remark. 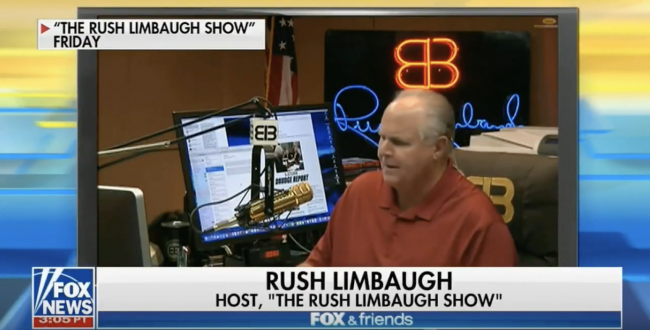 RUSH ARCHIVE: He blew the whole thing up with one question. Forget the words used. The question was, why do you people on the Democrat side want to continue to bring people to this country that are not going to benefit this country? Why instead do you not want to bring the best and brightest? These people in the media are a bunch of the biggest phony baloneys on this planet, acting like they don’t talk this way. They think this way about flyover country, as though anybody who does think or talk that way is somehow subhuman. The bottom line here is that the president of the United States was presented with an absolute rotten deal.

RUSH: And, by the way, it was a deal he didn’t see coming. I mean, you got Durban and Lindsey Graham and they basically propose something that’s nowhere near what Trump wants and Trump is exasperated. Why do you continue to want to bring burdens to the country? 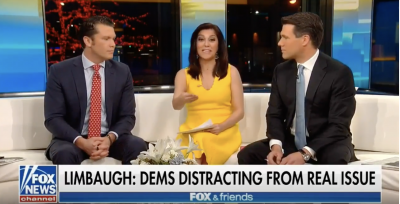 You know, it opens up a debate on whether or not we ought to have a merit-based system and we should and we don’t. We are bringing in permanent underclass Democrat voters. That’s what they want. And Trump’s exacerbated by it. The Fox News panel then discussed what I had said. It’s Pete Hegseth and Rachel Campos-Duffy.

HEGSETH: Precisely the conversation the left does not want to have. Who exactly are we importing into our country, and what are they doing once they get there?

DUFFY: I love what Rush Limbaugh pointed out there. Go back to what he said about how the left speaks about conservatives. In much the same way, remember, it was Peter Strzok, the FBI agent who had the email exchange with his lover, who said, “I can smell Trump supporters in Walmart.” That’s the disdain they have. 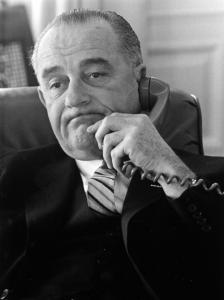 It’s a sore spot. These people act like they are the pristine examples of decorum and propriety, like it’s just so beyond the pale that anybody would ever use that word as a president in the Oval Office. And yet you can boing interns all day and all night and have it said to be nobody’s business, and LBJ can say — it’s just phony. The outrage is phony because they have become actors.