Durbin Gives Up the Ghost 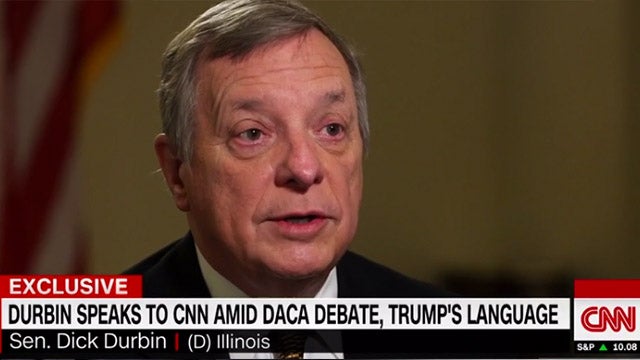 DURBIN: Yesterday may be one of the most bizarre weeks I’ve ever experienced in Washington. I’ve been here a few hours. To be invited by the president on Tuesday to sit next to him, literally, at a meeting with 26 members of Congress and talk about immigration and hear the president say, “You send me a bill and I’ll sign it, I’ll take the political heat, now get down to work. You need a Cabinet Room, you can have a Cabinet Room. Let’s get it done.” Then we call him two days later, Senator Graham and I, and say, “We’ve done it. We met your criteria. We have a bipartisan bill. We’re ready to go.” And then to be called into the president’s office and find that we’ve been sandbagged.

DURBIN: General Kelly and Steve Miller, as I understand it, invited five other members of Congress who are not in favor of immigration reform, or are in a very harsh sense, and they were there to refute any assertions we made that this was a good policy.

RUSH: He says, “I sat next to him literally and he said, ‘Send me a bill and I’ll sign it, I’ll take the political heat.'” I knew these guys, I knew this. So they put together their dream bill and — well, I’m out of time here but I will explain this when we get back. Don’t go away.

RUSH: Dicky Durbin gave up the ghost here in this sound bite. Basically, Jake Tapper was asking him (paraphrased exchange), “What’s your reaction to Trump saying you’re hurting DACA and the military?” So Durbin says, “You know what? To be invited by the president, sit next to him at a meeting, talk about immigration, hear the president say, ‘Send me a bill; I’ll sign it. I’ll take the political heat. Now get down to work,’ and so we call him two days later and say, ‘We’ve got a bill! We’ve got a bipartisan bill! Senator Graham and I, we’ve done it!'”

I knew this is what it was. The thing that makes this so incredible is that Lindsey Graham wants a deal so much. He wants somehow his name to be on some bill called “comprehensive immigration reform.” He wants this so badly that I think he fell for what Trump was doing in that meeting. I told everybody, I had… Look, I don’t mean to sound “I told… I told…” I’m just recapping history here. When everybody was worried that Trump was about to cave on this, it was my opinion that that White House meeting had nothing to do with immigration.

It was about refuting all of the claims in the Michael Wolff book that Trump’s incapable, incompetent, senile and all that. I thought at some point these Democrats in that meeting were gonna figure out that they were just a bunch of props and Trump was using them. But apparently they bought it, and so Durbin and Lindsey put together this dream bill of theirs thinking that Trump’s gonna sign anything. (laughing) “I’ll sign anything!”

You talk about…? (laughing) So they take it up there and they find out that Dick Durbin is livid when he finds out that there are people in the meeting who are anti-amnesty, that Trump has invited people who think what he thinks into the meeting. So Durbin thinks that he’s been sandbagged! He said, “General Kelly, the chief of staff, and Steve Miller invited five other members who were not in favor of immigration reform, and they were there to refute any assertions we made that this was good policy.”

So are we to believe, Senator Durbin, that you literally thought you had been given permission to write a blank check and take it in there and it was gonna be signed? Is that really what you want us to believe? I think this is all back… You know why it’s back? Because they believe what they think about Trump. They believe he’s an idiot, they believe he’s unqualified, they don’t think he has a brain, they don’t think he knows how Washington works.

They think that they can outsmart him and outmaneuver him, especially after that meeting when they thought he was caving. And they get up there and they find out that, in their words, they’ve been sandbagged or whatever. So Durbin gets so ticked off that he comes out of there talking about Trump using that word to describe the, what, African countries and so forth. And so the storm that erupted from that has happened. I’m telling you, this is classic.

This is a president who was elected to be a disrupter, disrupting. This is somebody draining the swamp, elected to drain the swamp. This is what pushing back against the establishment looks like. Imagine Durbin being offended that there were people that didn’t agree with him in this meeting. What did he think actually was gonna be in that meeting? What was this meeting? He and Lindsey Graham get to present their bill and Trump — who said, “Bring it to me; I’ll sign it. I’ll take the heat” — was actually gonna sign off on it?

Who outsmarted who here, and who is it that made them put their cards on the table? So now the Democrats went for it. They put everything on the table. They got their wish list and they put it on the table, and now everybody knows what they want. They want blanket amnesty for everybody currently in the country, not just the DREAMers. They were outsmarted. Now, they’ll claim they were lied to — as though they never do that.

They will claim they were misled. They will claim that they were sandbagged by Stephen Miller and the chief of staff, and then the icing on the cake is when Trump told them that he couldn’t have cared less what the Congressional Black Caucasians want. Last we looked, the Congressional Black Caucasians did not win the election. I love it. I have to tell you, folks, I absolutely love this.

RUSH: So basically Dick Durbin was tricked into validating Donald Trump’s competence and skill as a negotiator and at the same time had his, you know, wet dream immigration bill blown to smithereens. I can understand why the guy’s kind of out sorts, when he thought that he was going into that meeting, was gonna roll Trump. (imitating Durbin) “The president said, ‘I’ll sign anything you send me, I can work with that,’ and I believed him. And now all he could say was to call these countries hellholes or whatever.” Dick Durbin, Dicky Durbin.