If You’re Getting a Wi-Fi Alert on Our App, Here’s Why

RUSH: One thing about the Rush Limbaugh app. This is the second observation like this that I have heard. There have only been two. If you’re getting an alert on your app that you need to turn on Wi-Fi or that you’re not on Wi-Fi and it isn’t working, by default we have the setting for using the app on cellular turned off to protect your data usage.

So if you don’t have Wi-Fi and you want to use the app to stream audio or watch the Dittocam on cellular, you have to go to the settings of the app and flip the toggle switch that allows you to stream content while on cellular. By default, we have that turned off so that we don’t burn through your data plan. We give you the choice. It doesn’t matter that your phone is receiving cellular signals.

You’ve got to go to the settings of the app and actually toggle on the setting that allows data while on cellular. We’ve had two people mention this, and so if by chance you’ve encountered that — we look at app comments frequently and there has been so few technical problems, questions, complaints, it’s amazing. All the comments are how much they love the app. It’s phenomenal.

I’ll have more on this as the program unfolds, but I wanted to get that since people are trying to stream on the Dittocam, and if you don’t understand that you have to go to settings and enable streaming on cellular, you’re gonna get an alert saying you’re not on Wi-Fi and therefore you can’t listen.

Even though you think your cellular is on on the phone, it’s gotta be turned on on the app.

RUSH: To the phones. Mike in Mesquite, Texas. It’s great to have you, sir. How you doing?

CALLER: Thanks, Rush. Mega dittos. Longtime listener. The first thing I’d like to say is I like your new app. It took me about 30, 40 minutes to get used to it, but being a Rush 24/7 subscriber, it was fun going through and seeing all the goodies that are in there.

RUSH: Well, I appreciate that. Why did it take you 30 or 40 minutes? You mean operationally took you 30 to 40 minutes how to navigate it?

CALLER: Right, right. Just to go through it and see all the ins and outs.

RUSH: It took 30 to 40 minutes to experience everything in the app is what you mean, right?

CALLER: Just to navigate through all the ins and outs and looking at everything single thing you have to offer in there. What I’d like to say is, “For eight years every single morning I woke up with a frown on my face wondering how our country was gonna be demeaned.” The Constitution was being stepped on, and it was just worrisome that this country was gonna be turned into a banana republic. But the day Trump was elected, ever since that day I have had a smile on my face. I have upbeat in my step. I’m just so glad and happy. People around me are happy. Everybody I meet seems to be happy nowadays, and I think it’s great, and I feel so great, and for the first time I’m proud of my country.

RUSH: And it’s all because of the app, right?

CALLER: (chuckles) That and you. You’re always on fire, Rush.

CALLER: They ought to have you on the cover of TIME with your hair on fire, ’cause you’re always on fire.

RUSH: Let me ask you seriously — and, by the way, I appreciate your nice comments on the app. You know, it’s a good point. Folks, there really is. The app is just a shadow of the website. The website, if you become a subscriber, you have access to it, too, on your computer. So the app… They’re one and the same. 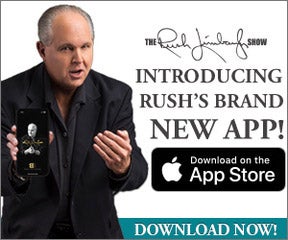 The app doesn’t quite have as much because we don’t have Flash video on the iPhone, Apple doesn’t offer it. So like the broadcast museum, the virtual museum is not there.

CALLER: It works good on my Android OS 4, too.

RUSH: Well, there you go. I mean, it is compatible with every operating system out there. The point is, it is chock-full, folks. This app is an ongoing encyclopedia that’s added to each and every day with the contents of every program added to it every day, and once it’s there, you can access it years and years and years down the road.

CALLER: I like going back several years listening to your shows.

RUSH: Thank you. You’re not upset then when Trump makes the Democrats and the media mad, right?

CALLER: I think it’s fun. I love it. I love everything he does. He’s got ’em wrapped around his finger.

RUSH: Does any of it — and I’m not trying to be provocative — does any of it worry you sometimes? Can you remember any instance where one of these flare-ups inside the Beltway involving Trump and the media made you concerned that it’s gonna go the wrong way?

CALLER: Oh, no indeed. I cringe every once in a while, because I love seeing the left, the liberals just melting down. That’s what I love seeing. They’re not ready for it. Finally we have a president that’s standing up and against the media especially, and they’re not used to it. And I love just seeing ’em melt down.

RUSH: No. No, they’re not used to it, and, well, the Republican Party isn’t, either.

RUSH: But melting down is exactly what the media has been doing. That’s exactly right. Well, Mike, I appreciate the call. I’m glad you waited. Thank you so much and for that stellar review of the RushLimbaugh.com app. It’s at the Google Play store or the iPhone App Store. And it’s free, folks. You don’t have to pay anything. You can subscribe and get the Dittocam and audio streaming, but you don’t have to, and the free side, transcripts of every program, sharable. Meaning, you hear something that you want to remember, that you want to tell your friends you heard, just share. Just send them the transcript right from the app, and that’s how we spread the word regardless of what Facebook and Twitter are doing. We got enough people here that we can be our own social media just sharing stuff from the app.