Your Host Mentioned by Two Members of Congress

RUSH: Your host mentioned by two different members of Congress yesterday, one favorably, one not so. I just want to get these out of the way before we get to the montage, the brilliant montage we’ve assembled of Drive-By Media childlike questions for Trump’s doctor on Trump’s health.

First off, Joe Wilson. Remember Joe Wilson? “You lie,” he said to Obama. Joe Wilson, member of Congress, Republican, South Carolina. This is on the House floor during one-minute speeches yesterday.

WILSON: It’s undeniable that the stock market, with the positive leadership of President Donald Trump, has soared. Rush Limbaugh was correct on his program today that the growth is unprecedented. One year ago after President Trump was elected, the stock market increased by 28.5%. Today the Dow Jones hit another record high, up over 7,200 points since the 2016 election. 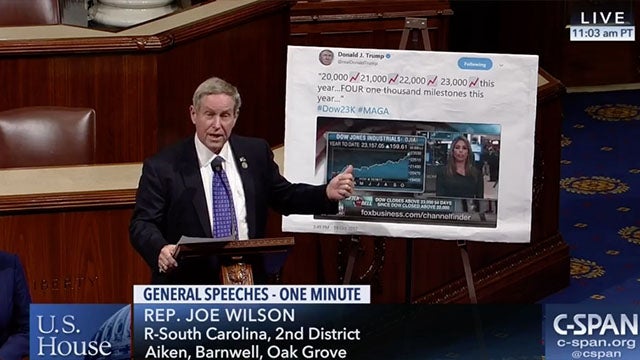 RUSH: “Rush Limbaugh was correct on his program today.” Now, they could say that every day about any number of things. Why do you think that it made the cut yesterday, Mr. Snerdley? Do you think Mr. Wilson just wanted the sound bite to air beyond that audience watching one-minute speeches on the House C-SPAN network? “Rush Limbaugh was right” could be an ongoing, never ending loop that any number of elected officials could say every day.

But now we turn to Don Young. This one mystifies me because I think he’s confusing me with somebody else. This is about earmarks. This was during a House Rules Committee hearing on earmarks just this morning.

YOUNG: You heard from Rush Limbaugh that this is gonna add to the debt, and that’s pure — pardon the expression — horse manure, because in reality, it doesn’t, we’re spending within that but we have the right, we have the responsibility to respond to constituent’s needs.

RUSH: Of course you do.

YOUNG: That’s our job as congressmen, otherwise, what are we doing here? What are we here for if we can’t represent the people that vote for us? 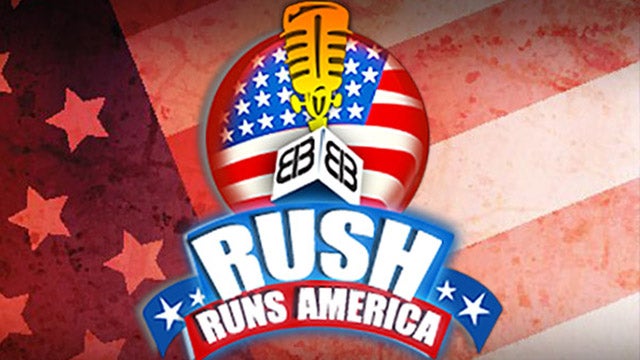 RUSH: Now, I don’t know Congressman Young, but he’s got me confused. Somebody told him I said — I didn’t say this. We haven’t even discussed earmarks other than to point out they want to bring ’em back. But I didn’t say anything about ’em adding to the deficit or not. Not that I remember. But I do say a lot of words. Maybe we should have somebody go back and check the transcript, but I don’t remember ever talking about earmarks adding to the deficit. Do you? But yet I was mentioned as horse manure incorrect there.

But he’s right. Members of Congress job is to spend money, House and Senate, that’s the job, spend money. And I don’t say that in a mean-spirited way or critical way. That’s the job, part of it, not the whole thing. I just don’t recall ever talking about earmarks adding to the deficit.

RUSH: We actually went back to the archives for something, ’cause ever since we played the sound bite here of Alaska Republican Don Young saying that I said earmarks are going to add to the debt… I never said that, and in fact, in our archival search we find that I’ve said pretty much just the opposite. So here again — and by the way, this is not…

I don’t want anybody calling Congressman Young and saying, “Rush Limbaugh is really laying it on you!” Don’t do that, folks. That’s not why I’m doing this. I’m just mildly and patiently correcting the record. So here again this morning, this is during a House Rules Committee hearing on congressional earmarks, which they’re trying to bring back. This is Republican Don Young from Alaska.

YOUNG: You heard from Rush Limbow (sic) that this is gonna add to the debt. And that’s pure — pardon the expression — horse manure. Because in reality, it doesn’t. We’re spending within that. But we have the right — we have the responsibility to respond to constituents’ needs.

YOUNG: That’s our job as congressmen.

RUSH: To spend money. I know. 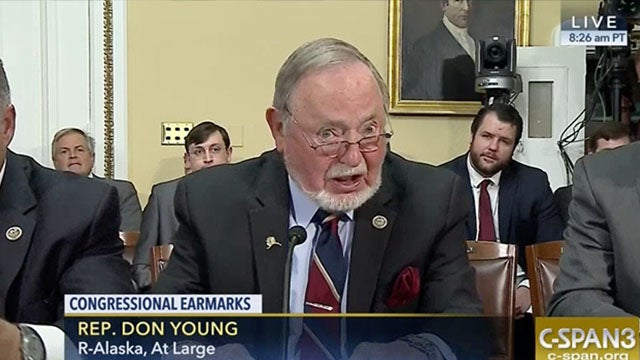 YOUNG: Otherwise, what are we doing here? What are we here for if we can’t represent the people who are voting for us?

RUSH: That’s exactly right. You gotta spend money to do that. But we went back to the archives. You know, I didn’t mention anything substantially substantive about earmarks earlier this week or late last week. I just made mention of the fact that they’re thinking about bringing ’em back. Remember earmarks became a huge, huge deal to Republican voters and a lot of voters as an example of budgetary irresponsibility and buying votes and all this and that. So we went back and we found November 8, 2010. Now, admittedly, this is eight years ago, a little over seven years ago. But this is what I actually said about earmarks.

RUSH ARCHIVE: Does anybody doubt that that’s what they’re for? Look, in the terms of saving dollars it’s like spitting in the ocean. If you eliminated all earmarks, the effect on the budget, you couldn’t even see it. But the purpose of earmarks is bribery. And of course then you ask, “How would Congress survive without bribes, kickbacks, all that kind of thing?” You know, it would be fun to see how Congress would survive without bribes. But does anybody disagree with me that that’s the real purpose of an earmark? They’re not budget busters!

RUSH: There you have it. I said right there, “They’re not budget busters,” and I remember this now because there were people calling here left and right wondering why I wasn’t on the anti-earmark bandwagon. It’s because financially it isn’t a big deal. It’s not gonna bust the budget. It doesn’t add to the deficit. It’s not that much money. And people would disagree with me and say, “It’s a start.

“I mean, if you’re gonna be serious about balancing the budget you have to be serious about everything. You can’t say, ‘Well, we can ignore that because it doesn’t do that much damage,'” and they may have had a point. But I just want to clarify. I’ve asked the audience here, the staff here. Nobody remembers me referring to earmarks as a “budget buster” or as something growing the deficit, either early this week or late last week.