RUSH: This next story actually dovetails with our first caller today, Rachel. We were discussing, she wanted to know, where do I go to find straight-down-the-middle news — something that’s reliable, factual, untainted, I don’t have any doubts about it — and I told her there is no such place. And, by the way, when has there ever been? Well, I’ll guarantee you back in the sixties — in the fifties and sixties, when it was just ABC, CBS, NBC, you’d be stunned the number of people that thought it was gospel. Not everybody did, but it’s not that way now, because the Drive-By Media’s monopoly has been blown to smithereens.

That began in 1988. So in the course of our discussion, I was asking her questions. I set up some circumstances in the Trump-Russia collusion story. I pointed out there’s no evidence, the people making the charge for it have no evidence. In fact, the only evidence we have is that Hillary and her campaign colluded with Russia in the creation of the Trump dossier. I said, “What would it take for you to believe?” She said, “Trump would have to prove he didn’t do it.” I said, “How can he do that? How can anybody prove they didn’t do anything?”

Besides that, that’s not what’s on the table here. This is a legal matter. We have a special counsel — Robert Mueller and Koup & the Gang — and they’re trying to put Trump in jail. They’re trying to get Trump kicked out of office. “Now, in that circumstance, Rachel,” I said brilliantly, “they have to prove that he did it! So could you tell me what would Trump have to do — what could Trump do — to show you he didn’t do it?” (ringing) And of course, there wasn’t an answer because there isn’t. (ringing) You can’t prove a negative. (ringing)

Another example. (ringing) Wait a minute. Who’s buzzing me now? (ringing) I can’t take this call now, and I don’t even know… I’m sorry about that, folks. I just ditched it. See, I didn’t even have to pick up the phone to ditch it. I just ditched it right there on the trusty Apple Watch, and it’s gone. Now, remember I have said to you that in my music-playing days, deejay days, I had a program director who had a philosophy that you can never be hurt by a song you don’t play.

And what that means is, if you play a song that a lot of people don’t like, they will punch the button and go to another station, and that hurts you. So his theory was, “If we miss, if we don’t play a couple songs that are good, nobody’s gonna ever know that we’re not playing ’em. But if we play a wrong tune and they punch out, we’ve had it.” I said, “Yeah, but can’t we benefit by playing that?” He said. “Yeah, of course, but they’ll never know we’re not.

“They can’t prove that we’re not playing it, because nobody listens 24/7, 365.” Same thing here. There’s nothing anybody can do — Trump or anybody — to prove he didn’t collude with the Russians. But fortunately in our way of life, our system, he doesn’t have to. So, boy, does this story…? What a great dovetail this is. This is from TheHill.com, and he’s the headline: “Facebook Tells Congress it Cannot Prove or Disprove Trump-Russia Collusion.”

Now, you talk about something ending with a whimper? The Facebook connection was the closest thing the Democrats thought they had as proof of Russian collusion. You know why? Ads! They are convinced… Remember that sound bite we played earlier this week? I’m driving home, I’m listening to these eggheads on MSNBC, and one of them — Chris Jansing — has got some expert from some Democrat think tank, and she’s saying, “We have just discovered, we have just learned that an increasing number of Russian bots are driving the hashtag to release the memo!”

And this holier-than-thou, stuffed-shirt guest said, “This is what we have feared. This, Chris, is exactly what we’ve been afraid of!” So I’m riveted to this because we two people that don’t know what they’re talking about, simply hoping and wishing and making it up. So they’re thinking, “The American people couldn’t possibly want this memo released,” the Devin Nunes memo. “The American people couldn’t possibly want that released. It has to be the Russians do it.”

The Democrats’ fallback is the Russians are responsible for everything that’s going against them — which is funny, because usually these people love Russians and love communists. Oh. Speaking of that. Wait ’til you hear. I’ve got a couple sound bites from a Millennial. Wait ’til you hear this. Do not let me get to the second half hour with not having aired these things. “Facebook Tells Congress it Cannot Prove or Disprove Trump-Russia Collusion.”

The Democrats are relying on Facebook ads, everything, ’cause they’re grasping at straws, ’cause there isn’t any evidence Trump did it! The evidence is that the Russians were colluding with Hillary. “Facebook informed Congress in newly released documents that it could not prove or disprove collusion between Trump’s campaign and Russians who may have used the online platform to try to sway opinions during the 2016 election.” Now, some people think this would be the big news of the day.

I think this is a chock, because the whole notion, “Facebook Tells Congress it Cannot Prove or Disprove…”? That’s not the story. The story is: Facebook tells Congress it cannot prove Trump-Russia collusion! There is no disproof! There is no proof somebody didn’t do it. I know you’re thinking, “Okay. Somebody robs a bank and the guy accused of it’s sitting at home with his family having turkey. You can prove he wasn’t there.”

Yeah, I know. An alibi, I know. But in this circumstance, there isn’t any proof that Trump didn’t do it. There has to be proof that he did. That’s the story and that should be the headline: “Facebook Tells Congress It Cannot Prove Trump-Russia Collusion.” Throwing “disprove” in there remains a possibility. And it isn’t! (interruption) No, I don’t think I’m going out on a limb. I do not think, I’ve never thought this happened. I’ve never thought Russia could do anything to sway the outcome of the election.

That’s where this has always been bogus to me — and everybody before the election’s even said so. Obama, any number of people said our presidential election is too diverse, it’s too spread out, it’s too widespread. There is no way. Voting machines are not even connected to the internet! There is no way the Russians could determine the outcome of an election and get away with it without doing things that would be noticed. But even if… I just don’t think it’s possible. So that’s been the faulty premise of this from the get-go.

“In written questions from the Senate Intelligence Committee, Facebook representatives were asked whether metadata on their site could reveal possible collusion between Trump’s campaign and the Russian government, a possibility raised by some researchers.” What researchers? Who are they? “‘Several independent researchers have said that Facebook has the ability to search for content or metadata that could substantiate or disprove allegations of possible collusion between the Russian disinformation operation and the Trump campaign’s own social media efforts…

“Facebook does not believe it is in a position to substantiate or disprove allegations of possible collusion,’ the company responded…” Well, maybe not, but we can prove that Hillary did. So what are we really doing here? We can prove that Hillary’s campaign did. We can prove that the dossier is unverified and uncorroborated, and that was even admitted to by Comey in congressional testimony, after it had been used probably to get a FISA warrant!

Facebook tells Congress it can’t prove or disprove…? So you might think, “Well, that ends that.” No, it doesn’t, because Facebook leaves open the possibility that there is proof that Trump did it.” That’s on purpose, and they’re never gonna take that away. That’s gonna live throughout this year into the midterm elections. Senator Charles “Grassley Releases Strzok-Page Texts Showing FBI Was ‘Pulling Punches’ In Clinton Probe — 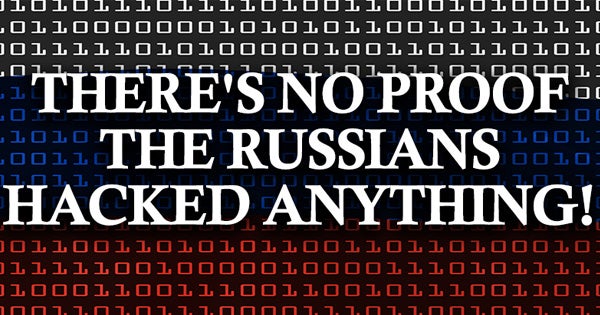 “In the text message flagged by Grassley, Page suggested that Strzok should not take an aggressive approach to Clinton [investigation] because of the strong possibility that she would be elected president. ‘One more thing: she might be our next president. The last thing you need us going in there loaded for bear.’ Page said.” Meaning: You don’t need to really be investigating her seriously, ’cause she’s gonna get elected, and she’s gonna remember us, and we don’t want to be remembered as having caused her trouble.

“‘You think she’s going to remember or care that it was more doj than fbi?’ [sic] Page wrote.” No. “‘[S]he’s gonna remember us.’ … Strzok said he agreed with that assessment. ‘I called Bill and relayed what we discussed. He agrees. I will email you and [redacted] same.’ ‘Bill’ is likely Bill Priestap, the FBI’s chief of counterintelligence.” So the chief of counterintelligence — who was Strzok’s immediate boss — was also concerned that Hillary might be angry with the FBI if they pursued the Hillary server investigation too aggressively.

Everything we’re learning here is that there was collusion up and down between the FBI, the DOJ and the Clinton campaign and Hillary herself from the top of the FBI down. And we know why now. It was to protect Obama. This is the point. This is the point. The FBI, the DOJ, it may look like that they were trying to protect Hillary — and they were; I’m not denying that — and that it was about getting her elected.

But, folks, even more important than that, they were protecting Obama, because Obama was complicit in this. Obama lied when he told people that he only learned about Hillary’s server when you saw it when everybody else did on the news. When he was trafficking emails back and forth with her through that server, he knew it.

He bald-faced lied to the American people in a press conference, or with reporters somewhere, about when he found out she was doing it. He knew it all along, and they were trafficking. There had to be classified stuff going back and forth because she’s the secretary of state and he’s the president. I guarantee you they’re not emailing about Chelsea’s wedding reception or where the hell she’s registered for wedding presents.