An Explanation for Market Volatility You’ll Hear No Place Else

RUSH: We have this mysterious roller-coaster stock market. Yesterday when the market was going through its gyrations and plummeting down, you know what the Drive-Bys did? They put a side-by-side of the Dow Jones Industrial Average with Trump speaking in Cincinnati and tried to make it look like Trump is the reason the market is plummeting. And one of the explanations that they’re giving — and this is not new.  I’ve been familiar with this for a long time.

They’re saying that this economic growth, this wild economic growth and all of this job creation and the accompanying wage increases is putting inflationary pressures on the economy, and the Federal Reserve says, “We’re gonna have to raise interest rates,” and that supposedly is causing the market to plunge. What causes markets to plunge is uncertainty, and I’m gonna give you another ingredient — a potential ingredient — into this market seesaw, if you will, and that is this.

Not everybody in the market is a Democrat.  Not everybody in the market is an uber-liberal.  There are a lot of people in the market who I think are very, very alarmed by the instability brought about by this attempt to get rid of Donald Trump.  Now, you’ll never see that excuse published.  You’ll never see that reason given as an explanation for market volatility, but as far as I’m concerned, you can’t take that out of the equation here.  So there are a lot of factors that go into this.  The market right now is up a hundred points.

Starting the day, the futures had the market down 160 and the Drive-Bys are hoping and praying that we have another plummeting stock market today.  That’s another thing.  You know, I was watching TV… We had a caller yesterday. Snerdley found a caller who asked, “Do you get tired, do you get offended when you see other people use things you’ve said over the years?”  I said, “I used to, but I don’t anymore.” In fact, I don’t even know who this is. It doesn’t matter. It doesn’t matter; it’s not a criticism. 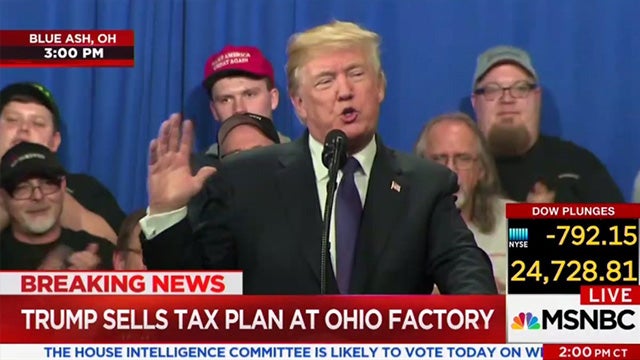 They’re ecstatic and happy about it.  I remember saying many times: “I wouldn’t want to be in a political party or hold an ideology where my winning depended on the country being damaged, where my victory is dependent on the country doing poorly.  But that is exactly where the Democrats are today.

RUSH: Sorry, this is gonna be a very short segment because I was on a roll in the opening monologue, and I didn’t want to stop.  But I tell you, folks, you need to be vigilant out here.  The Drive-By Media is doing everything it can to blame your wage increase and your bonuses and all these new jobs for whatever is happening in the stock market.  It is a lie.  It isn’t true. But they want you to believe it so that you will think your life improving causes problems like this.  Do not — I beseech you — fall for it.

The way it went was the Drive-Bys said, “Well, Trump isn’t doing anything. All he’s doing is permitting the continuation of Obama policies. The economy was such a mess when Obama took office in 2009. It was worse than anybody knew. Bush did not tell Obama the truth about how bad it was, and Obama thought his stimulus bill would be all it would take to reignite the economy, but as we all know now that was clearly not enough,” and it took eight years for the Obama recovery to kick in. And they trying to claim credit for it.

Now all of a sudden when a very curious stock market plunge occurs, now all of a sudden it’s Trump’s economy, it’s his alone, and not only that, the specifics of the Trump economy are why you are losing all of your money in the stock market. Yeah. It’s because Trump has engineered so many new jobs at a rate that’s much too fast for the economy to absorb. And then these tax cuts, which are causing wage increases and bonuses, and that is going to cause inflation by putting more dollars out there in circulation in the private sector, and nobody wants inflation.

The Federal Reserve, Alan Greenspan and all of his disciple followers since claim to be governed by a number one objective, and that is to prevent inflation at all costs. And so right on schedule we have a drastic market plunge, the Drive-By Media’s regaling everybody with how much money they’ve lost. They can’t publish it enough that all of the gains for this year have been wiped out in one day.

And they say this with a big smile. They say this enthusiastically. They are reporting it happily and giddily on television and in their published stories in newspapers and magazines and websites and so forth. They are ecstatic. They can’t wait to tell you how your fortune is being whittled away, evaporating right before your eyes because of this guy Trump, who doesn’t know what he’s doing.

I don’t believe in coincidences, and especially today. There are a lot of experts trying to tell us why the market went south yesterday. But in truth, there isn’t anybody who really knows, except and unless it was manufactured. Now, before anybody goes off here half-cocked, the question, “Rush, is it possible for somebody to engineer a collapse in the market like that?”

I don’t know. But I know people who think they know. I have been getting emails all night and all morning from people who make their living one way or another in the market. And they are all suspicious. And many of them think that some of the volatility is also due to the never-ending assaults on Trump making people nervous in terms of preventing any stability from setting in.

Now, we learn that much of the plunge yesterday happened once computer automatic scripts kicked in. And when market behavior plunges a certain amount or goes up a certain amount, computer trading kicks in, in many reasons for precautionary measures; but once it kicks in, it’s hard to stop it, because it’s automated.

I’m a novice. I’m like anybody else. I don’t pay attention to the market every day precisely because of things like this, and I don’t live and die with the stock market. But I do pay attention to trends. I’m old enough to have ascertained trends. The market right now is up 190. Now, if there were something systemically wrong, the plunge, it seems to me, would continue today. One day of a plunge, I don’t care how much, is not that much of a buying opportunity. It is a buying opportunity, there’s no question, but the fact that it’s up now 233, 235, so it’s coming back.

But all anybody needed was a one-day plunge that was significant in order to do coordinated news reports on the failing Trump economy, particularly because Trump focuses on market activity so much and so often as evidence that his administration is a positive thing for the American economy, the American worker, and he points to the robust activity in the market as a sign.

So we have a one-day plunge, which results in a cacophony of news stories all over the media. And now today not just about the problems with your investments, but now the negative news about our culture and about our planet and about our future, it literally is overwhelming. It’s so apocalyptic that it could be causing some people not to even want to get out of bed, it is that intense today.

And the solution generally is a variation of, “Vote Democrat, support Big Government, surrender your life to your betters and let them make decisions for you,” because you’re incompetent and incapable.  And the world is too big and too important to leave it up to you and other individuals to get it right.  We need central planners, experts who can plan for a future while eliminating the drastic downsides.  But remember who those people are.  All during the eight years of Obama, they reveled in the negativism.

And they told you that we deserved it because we had had way too much positive economic growth — way too much superpower status — that we were not deserving, that we did not deserve.  We had come by our status in unjust and immoral ways.  And so, a declining economy was simply a new reality, a new norm.  And we were told the Democrats are the perfect stewards for this to limit the damage and to admit the reality that America’s great days are behind us.  You may not be guaranteed now of having a better life than your parents — and, of course, all this was the fault of America.

It was the fault of America as founded, the fault of conservative-Republican presidents who had laid groundwork for this. But now the realists and the smart people from Harvard and Yale were now in the U.S. government, and they quickly understood the new normal, the new reality, and that is that America’s no different than any other nation of the world and we shouldn’t expect to be.  We shouldn’t expect to be bigger, richer, more powerful.  Who are we to say we’re better than anybody else?

Who are we to have more than anybody else? That’s inherently unfair and unjust, and the Democrat Party was gonna make sure that we were just one of many nations in the world, with open borders diluting our culture — and ridding this country of that which made it great, special, and unique — because all of this would lead to permanent empowerment of the American left and the Democrat Party.  Trump has upset all of those plans.

Trump has come in and demonstrated that there need not be a new norm of economic decline.

There need not be a new America that is not exceptional.

There need not be an America that is not a superpower.

There need not be an America that is not wealthy and growing and prosperous.

Donald Trump, in a year, has blown to smithereens eight years of conditioning of the American people brought about by the Obama administration — and for that (among many other reasons) he’s got to go.  And that’s what we’re living in.  And we are in this mess and treated every day now to a bombardment of apocalyptic, negative, pessimistic news that is written and broadcast in ways to make you believe that it is the fault of Donald Trump, the Republican Party, and then conservative media.