The Ongoing Assault on Our Culture

RUSH: We have, ladies and gentlemen, a complete Stack on the ongoing and continual cultural assault — I should say, the assault on our culture — that is happening today.  And let me give you just some headlines as a preface for what’s coming.  New York Times: “People Are Not Having Kids Because They Are Afraid of Climate Change.”  “Hillary Clinton Predicts Women Will Bear the Brunt of Climate Change.”

As a little addendum here, Hillary is intent… I’m convinced, Hillary’s intent on making college-aged women her core support group, and she wants them scared and resentful of men.  This is how she’s positioning herself. She’s planning a comeback. Don’t doubt me.  And she’s planning this come back with college-aged women.  Don’t forget.  When you turn 50, nobody cares about you anymore demographically, advertisers and all of that.

Hillary knows this. Even though she is well over 50, she is trying to become a hipster and the go-to source for college-age women, and she is basing it all on the scared, resentful feelings towards men that she’s trying to engineer among these women.  “Doritos Announces It’s Making A ‘Female-Friendly’ Chip That Doesn’t Crunch — ‘Research has found women do not like to crunch loudly or lick their fingers when eating in front of others.'” 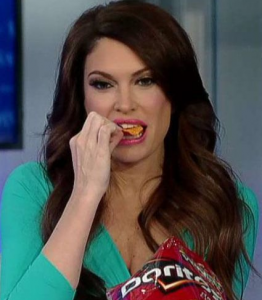 So Doritos — owned by PepsiCo with a female CEO — has announced they’re making a female-friendly chip that does not crunch.  This babe at PepsiCo is getting some grief over this, too, from the feminazi.  “What do you mean, you’re making a special chip?  Men and women are the same!  What do you mean, signaling out women don’t like this?  You’re making women look different.  That’s not the way we’re supposed to play this.”  So she’s catching some grief.  You’ll here in the audio sound bites.

From Fox News: “Parents Furious as School Cancels Father-Daughter Dance over Gender Issues.” A school has canceled “its annual father-daughter dance because it violated a new school district policy regarding transgender and gender nonconforming student[s].” We’re talking here less than one-tenth of 1% of the population, and we are canceling traditional events in deference to whatever oddities are going on there.  Los Angeles Times: “Humanity Will Need to Make Some Drastic Changes if it Wants to Keep the Good Life Going.”

The LA Times says that, as of right now, there is not a single place on earth worth living. I’m not kidding you. The negativism, the fatalism, the apocalyptic nature of Drive-By Media and the left is just bombarding people, and it is concentrated in a number of different stories today.  Here’s one more headline from the Miami Herald: “‘I Wake up … From Nightmares:’ Why Whole Foods Workers Are Hating Life.” This is a story on people that work at Whole Foods and they’re “hating life.” They’re having nightmares.  It’s an ex… (interruption)

Well, you’ll have to wait and hear why.  That’s why I’m just giving you the headlines of what’s coming up.  I mean, the point is you cannot turn on the news today in the Drive-By Media and be — you cannot escape the bombardment of negativism, pessimism, apocalyptic nature, dystopian futures. “We’re dead! We’re killing the planet! We’re all gonna die! There’s no place worth living. Whole Foods sucks; it’s not worth having a job there.”