Democrats on Wrong Side of Economic Revival

RUSH: Here’s Chuck You Schumer. And Chuck You was in Louisville at the University of Louisville, and he spoke at a Q&A period after his remarks. It was this morning. And a member of the audience said, “There’s been talk of a blue wave of Democrats winning seats in the midterms. If this is to happen, what are the biggest obstacles that Democrats must overcome in order to win big in November?”

SCHUMER: People will make their own decisions about Donald Trump. Our mistake, I think, you cannot just run against Donald Trump. And it is the job of we Democrats to put together a strong, cohesive, economic group of proposals aimed at the middle class and those struggling to get there. There’s a lot of discontent in America. People don’t have faith in the future. 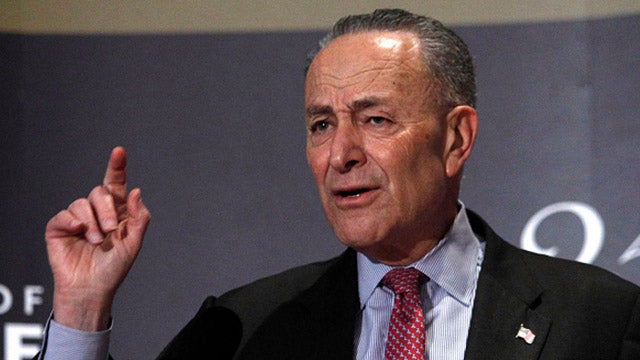 RUSH: This is just striking to me. Here we are in the midst of the biggest middle class economic revival since the 1980s. We are in the midst of people getting raises, bonuses, manufacturing jobs coming back to the country, all kinds of productivity going up, jobless claims going down. The middle class is the primary beneficiary. What can these Democrats offer that will be better than what we have now? And the answer is nothing! Because their solution is government does everything for everybody. They want government to be seen as the beneficiary — well, the benefactor.

They want people to see the government making their life better for them, but in a give-it-away sense, in a what-are-we-doing-for-you sense. Trump’s government is actually making life better for people by reducing their taxes and giving them higher disposable income and creating circumstances where new jobs are created and they’re high-paying jobs. It’s a labor market right now. What are the Democrats gonna offer? They don’t have anything but Trump hate.

The Democrats have to try to convince their people that this country is dying, that this country is on its last legs, that we’re nearing the apocalypse, and only Democrats controlling government can fix that. And there are gonna be plenty of sob stories about illegal aliens and the DREAMers and all of the people the Republicans are forgetting about and leaving behind, but the fact is that 80, 90% of the American people who work are getting a tax cut. They’re already seeing more disposable income per paycheck. What are the Democrats gonna offer?

The Democrats, they don’t have it in them, folks. There’s nothing in the Democrat Party playbook, there’s nothing in their ideology. Not one of them voted for the tax cut that is reviving this economy. Not one of them. What are they gonna do? The only hope they’ve got is Trump hate. And then they’ve gotta try to convince the American people that their standard of living going up isn’t real.

Do you know what the stock market’s doing today, folks? Have you heard? If you watch the Drive-By Media, I dare say you don’t know that the Dow Jones Industrial Average today is up over 500 points. Why don’t you know that? If it were down 500 points you would know it. If it were down 500 points they’d have a tote board up there, 80% of the screen, and they’d be tabulating the decline, and they’d have their analysts on microphone explaining how we’re just this side of the apocalypse.

But the DJI is up over 500, 10 minutes ago I checked. There isn’t any coverage of that. So you better get ready. We’re in the midst of an economic revival and an uptick, and the media and the Democrats’ only hope is to try to convince you it isn’t real, it isn’t sustainable, it’s phony or it’s only for the rich or what have you. The same old playbook they always use.