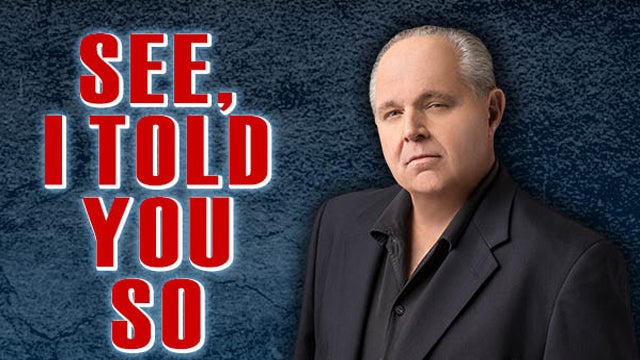 “The federal government this January ran a surplus while collecting record total tax revenues for that month of the year, according to the Monthly Treasury Statement released [Monday]. January was the first month under the new tax law that President Donald Trump signed in December. During January, the Treasury collected approximately [Are you ready for this?] a$361,038,000,000 in total tax revenues…” So let’s round it off: $361 billion. They spent $312 billion. They ran a surplus of $49 billion, in the first month!

There’s already more revenue coming into the Treasury than anybody at the CBO or the Democrat Party or any K Street think tank projected. All they talked about was deficits. All they said was the Trump tax cut’s gonna blow the budget sky-high and create massive deficits. In one month! “Despite the monthly surplus of $49,236,000,000, the federal government is still running a deficit of approximately $175,718,000,000 for fiscal year 2018.” Okay. Fine. But since when did we have even a monthly surplus with Obama — or, as the British say, “Obamber.”

So when they report Obama’s $4.1 trillion budget, they highlight all the things that Obama’s gonna fix. He’s gonna end terrorism — he didn’t, did he? — and global warming. With Trump, “Sends Congress $4.4 trillion spending plan that features soaring deficits.”