RUSH: President Trump is on Jeff Sessions’ case again. He’s now demanding Jeff Sessions investigate Obama. And I have to tell you, folks, this makes total sense to me. I want to go to audio sound bite number 4. I need to thank Sean Hannity. Sean Hannity played a clip from Monday on his Fox TV show last night. 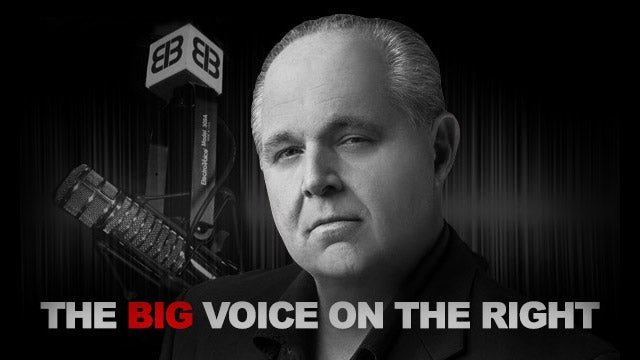 Oh, also, I was very happy, Rich Lowry has a column today that ran in National Review, New York Post, making another point that I said. I’ve been pointing out since last week, since this Mueller investigation happened, that the Russians are pikers compared to us. Do you know that the Hillary campaign spent over a billion dollars. The Trump campaign just under a billion. So figure two and a half billion dollars on the campaign. The Russians spent two million, and the most of it came after the election. Most of their Facebook money was spent after the election. Facebook admitted this.

I mean, they colluding with the Russians in an anti-Trump rally, CNN. The real collusion, as everybody knows now, is Hillary Clinton and Fusion GPS and the law firm they used as the cutout, Perkins Coie. They were the paying agent. You bring the law firm in for attorney-client privilege. So Hillary commissions essentially a work of art, the dossier. And this Christopher Steele guy was hired by Fusion GPS and paid by the law firm to go out and produce this dossier and make it look like it was legitimate intel.

And then John Brennan at CIA and Clapper at national defense, they all worked together in acting like it was legitimate intel to go get a FISA warrant to surveil Trump based on this dossier, which is political opposition research. Look, you know all this. So Trump is saying, “Look, there wasn’t any collusion here,” and it’s just been announced. Mueller said that none of this the Russians did had anything to do with the outcome of the election. And that any activity the Russians had with Trump people, they were unwitting. The Trump people didn’t know when they were interacting with Russians if they were.

So Trump naturally is claiming a bit of exoneration. He says, “But, wait. There was collusion between somebody and Russia, and it was Hillary Clinton and the Democrat Party and Barack Obama and his Department of Justice.” So the question that’s come up, “Well, if Mueller can indict the Russians, why can’t he indict Hillary and Fusion GPS and Christopher Steele?” And the answer is very simple, and it’s also very sneaky.

Take a look at that indictment. This indictment is written very, very craftily. It is very, very good in its disinformation. The indictment describes all of the things the Russians were doing to try to interfere in our democratic process. It describes the trolling and the way they were using internet bots and other bad actors to influence the American people to think one way or the other.

So there was a knee-jerk reaction. “Well, hey, doesn’t this open up Hillary and Steele and Fusion GPS? Doesn’t this just make them the next target?” No. Because Hillary and Fusion GPS, mail fraud? Wire fraud? Defraud the U.S. government? Identity theft? Ha! None of that’s applicable.

So Sean played the clip of the radio show from Monday where we described this, because there were some people that were all hot to trot on this, that it had to mean, logical conclusion, that Mueller had to next go after Hillary and Steele and Fusion GPS. 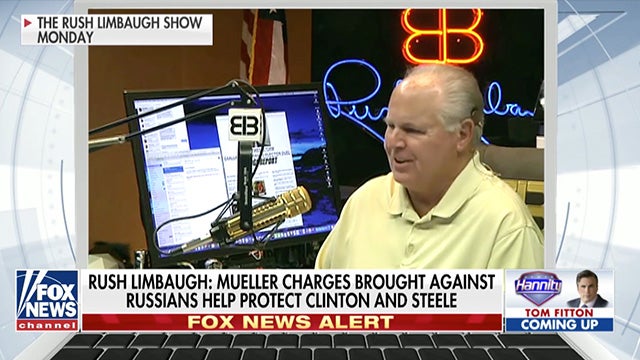 HANNITY: Rush Limbaugh had an amazing point on his radio show yesterday about why Mueller only indicted the Russians for certain crimes. He nails it. This is brilliant. Take a look. 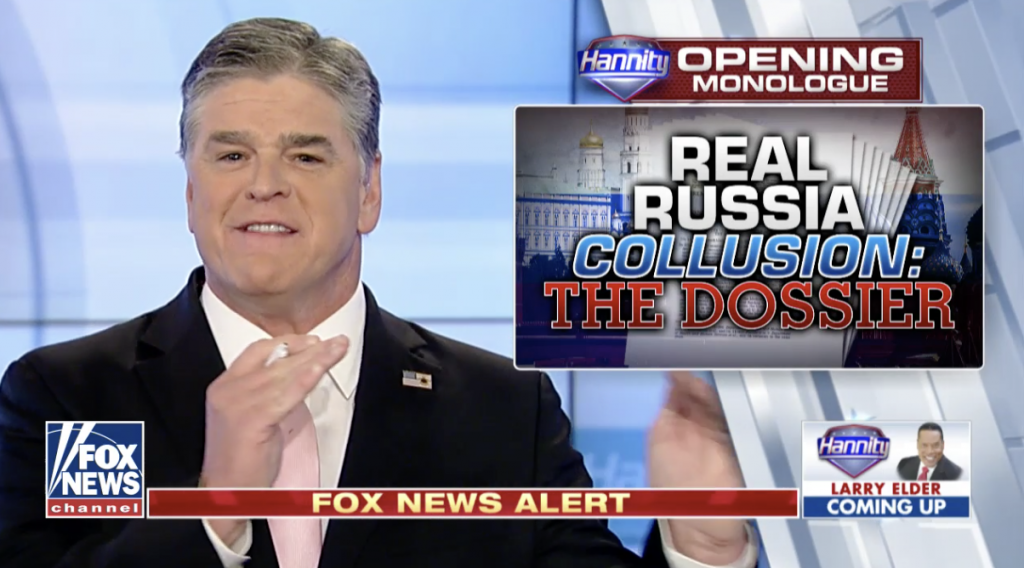 HANNITY: That’s why they didn’t go after the FEC issues. That’s why they didn’t go after the FARC issue. What Rush is saying here is brilliant, is that Mueller may have been shielding Hillary Clinton by limited the charges announced against the Russian trolls ’cause all of that could have been applied to Fusion GPS, Hillary Clinton, the campaign, Perkins Coie, and the rest of them. Brilliant point.

RUSH: Right. And that should have been an indication — thank you, Sean Hannity. This is great indication of what Mueller is doing. He is protecting the Democrats in this. He’s protecting Hillary. He’s protecting Steele and Fusion GPS, and by extension he’s protecting Obama. And so it’s very understandable that Trump would now say, “Jeff Sessions, where are you, buddy? It’s like the fourth time I’ve had to ask this. Where are you? Why aren’t you investigating Obama and his administration and Hillary? There’s real collusion with the Russians there.” And of course there is.

So I just have to remind everybody, the answer to all of these questions, why doesn’t Mueller do this, why did Mueller do that. Trump remains the target. He has always been the target. He will remain the target. The express purpose of what Robert Mueller and his investigation are up to is getting rid of Donald Trump. That was why the special counsel was hired. That was the intention of James Comey after he was fired. He wanted a special counsel. He wanted Mueller. He got it.

Mueller was not given a crime to pursue, so basically he has a legal fishing expedition with no time limit and no financial constraints. The objective remains to rid Washington, D.C., of Donald Trump. That has not changed from the day after the election. It remains the objective today in terms of this specific investigation and everything else that is ancillary to it. And they don’t take a day off. Now, they’re announcing indictments of these fringe figures that you never heard of, like the lawyer from Skadden Arps in London.

And Carter Page, who’s now announced he’s gonna sue the government for $1 to try to get his reputation back, ’cause he didn’t do anything. And Manafort remains in the crosshairs. But none of this that has been indicted — none of these guys — did anything during the Trump campaign. All of this stuff predates the Trump campaign, and certainly predates the election. A special counsel was hired so somebody is going to be charging. Special counsels don’t close up shop after two or three years, say, “You know what? We didn’t find anybody who did anything wrong.”

It never happens. So you announce the small fry, and it creates eager anticipation, and it builds the excitement for when the real action is coming. What I think the real action’s gonna be is an extensive report on all that Mueller has found. There will not be an indictment of Trump. What there will be, essentially, is a document that people like Adam Schiff can use to begin impeachment proceedings in the House — and all of that predicated on the Democrats winning.