RUSH: Rush Limbaugh — with half my brain tied behind my back just to make it fair — one of many being smeared by the Drive-By Media, and now some of the students at the high school are picking up on it and are joining in the smear mischaracterizing me as one of these conspiracy theorists accusing the students of being bought-and-paid-for actors.  Oh, speaking of which, there is this guy out there that claims that CNN gave him a question. They wanted to script his question.

He wanted to make a speech, extended remarks and ask a question.  CNN said no, and he is claiming that CNN wrote the question for him.  His name is… Let’s see. I put it in the wrong stack.  But it’s… Yeah.  “Parkland Shooting Survivor Claims CNN Gave Him Scripted Question for Town Hall.” The guy’s name is Colton Haab.  He is a student at Marjory Stoneman Douglas High School.  He said he “didn’t attend the town hall in his hometown because the network rejected his prepared questions and suggested that he ask a scripted one instead.” 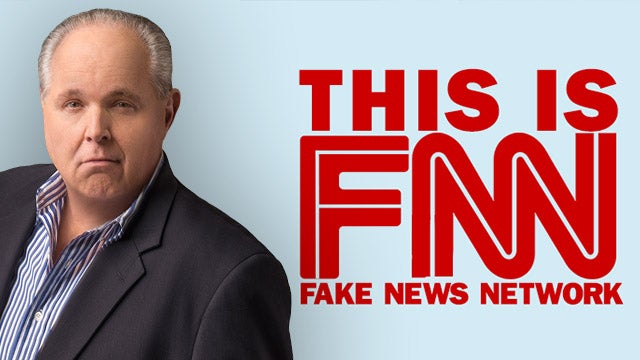 CNN’s denying it, saying that they would never do it; it didn’t happen.  What they claim happened was that the kid showed up and wanted to make a speech and then ask some questions, and CNN said, “Nobody’s making speeches here.  What’s your question?”  And that’s when it breaks down.  Now, remember, Donna Brazile used to work at CNN, and while she was at CNN, she got hold of questions that were gonna be asked in a presidential debate featuring Hillary Clinton, and she funneled those questions to Hillary Clinton in advance while working at CNN.

This has been established.  CNN is widely known for stacking audience members.  CNN has been documented countless times putting legislative aides of congressmen in audiences of town halls and trying to pass them off as average, ordinary American citizens that are not connected to the political system.  There have been secretaries and employees of K Street lobbying firms that end up as supposed citizens.  So when the guy says CNN scripted my question, there’s a tendency to want to believe it simply because of CNN’s past behavior.

CNN’s not gonna leave these things to chance, because the purpose of these things… There is an agenda behind these things, and that is the advancement of the Democrat Party agenda, No. 1, and within that agenda you’ll find everything that happens. Bashing Republicans, bashing the NRA, bashing people that take money from the NRA.  You can make book on it.