RUSH: All right. Let’s hit audio sound bite No. 3. This was yesterday at the White House business session with the governors, and Trump is talking about sheriff deputies who waited outside the Marjory Stoneman Douglas High School during the shooting on February 14th.

THE PRESIDENT: You know, I really believe… You don’t know until you test it, but I think — I really believe I’d run into, even if I didn’t have a weapon and I think most of the people in this room would have done that, too, because I know most of you. But the way they performed was really a disgrace.

RUSH: It really was and there’s no masking that. They are trying to mask this and justify it and explain it. It’s 45 warnings now. That’s the number we’re up to. The number of tips to various entities here warning of the very likely possibility this kid was gonna snap. One who even predicted he was gonna shoot up a school. Now the deputies, first one, this school resource officer who stood outside and didn’t go in who is saying he just he did a great job, and then the other three who also showed up and didn’t go in. So Trump says (paraphrased), “You don’t know ’til you’re tested, but I really think I’d-a run in there. Even if I didn’t have a weapon, I would have run in there.”

So the Drive-Bys are making fun of it. Jake Tapper and some others on CNN.

JAKE TAPPER: (music) President Trump says he would have rushed in to stop the Florida gunman even if he weren’t armed. His military academy classmates who served in Vietnam could not be reached for comment.

JEFFREY TOOBIN: In fairness when you look at his heroism during the Vietnam War, a prisoner of war for five years… Oh, no, that was John McCain. I’m sorry. It’s like… It’s ridiculous. I mean, it’s embarrassing.

ANDERSON COOPER: He did claim that, unlike Broward County deputies, he would have rushed into Stoneman Douglas.

A.B. STODDARD: I can’t even go there. (snickering) I mean none of us know what it would be like in that situation.

BILL KRISTOL: A normal president wouldn’t make it about himself. 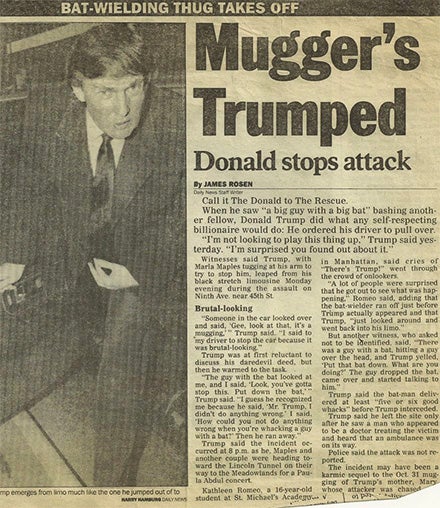 RUSH: “A normal president wouldn’t make it about himself.” Right. Okay, so November 20, 1991. I was in New York when this happened. The New York Daily News ran a story “that showed Trump stopped a guy from beating another man with a club,” with a baseball bat. “Trump was riding around Manhattan in his limo with his girlfriend, and later wife, Marla Maples,” who is the mother of Tiffany Trump.

As they’re tooling around in the Trump organization limo, “[h]e saw a guy beating another guy. Trump told his driver to pull over. Maples did not want him to get involved.” Maples said, no, no. It’s not your business. Don’t get involved. Don’t get out. Stay in the car. “Trump told James Rosen of the Daily News, ‘The guy with the bat looked at me, and I said, “Look, you’ve gotta stop this. Put down the bat.” I guess he recognized me because he said, “Mr. Trump, I didn’t do anything wrong.” I said, “How could you not do anything wrong when you’re whacking a guy with a bat?” Then he ran away.’

“There were witnesses, including Kathleen Romeo, who told the newspaper that when he emerged from his limo, the crowd cried, ‘There’s Trump.'” There’s Trump! So even when Trump stops a fight in New York, it’s about Trump, which just infuriates Bill Kristol and many others in the Never Trumpers. Kathleen “Romeo also said, ‘A lot of people were surprised that he got out to see what was happening.'”

What this also shows, there was a crowd there, and nobody was doing anything to stop one guy whacking another guy with a bat until Trump shows up, gets out of the limo, goes over there and stops the beating. We actually have it. We’re gonna post it at RushLimbaugh.com. We went back and we got an actual photo of the New York Daily News page reporting this story. So the left wants to mock Trump all they can.

They can’t help themselves. You heard Jeffrey Toobin in there, “In fairness, you look at Trump’s heroism in the Vietnam War, prisoner war for five years,” and Anderson Cooper and A.B. Stoddard and Bill Kristol and Jake Tapper. But there’s actual evidence that Trump did it on a previous occasion, even though it was back in 1991.