How Many New Republicans Were Created by 4th of July Celebrations?

RUSH: Hope everybody had a great day yesterday, a great Independence Day, great Fourth of July, and now we’re back at it right here behind the Golden EIB Microphone, your guiding light through times of trouble, confusion, murkiness, tumult, but, yes, even the good times. Rush Limbaugh here at 800-282-2882. Want to send an email, have at it, ElRushbo@eibnet.us. 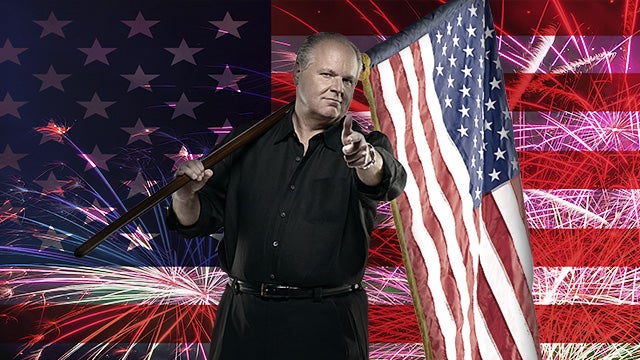 So I wonder how many new Republicans were created by yesterday’s Fourth of July celebrations? Folks, you won’t believe this. I’ve got the audio sound bites coming up. My advice, my intonation, my suggestion that you go out, fly the flag, do whatever you do that is patriotic, that was controversial and divisive on certain cable news stations yesterday.

We have the audio sound bite backup to prove it, and in each instance in the audio sound bites they refuse to put it in context. Remember what led it all off, that Harvard survey from 2011 which indicated that Fourth of July parades and flying the flag tend to make people vote Republican, support Republicans, feel Republican, what have you. And then everything flowed from that. And I will admit that I was kind of goosing the left doing this.

But the cable news networks, some of them, took it rather seriously and consider it to be extremely divisive. So let’s go to the audio sound bites. Whoa, whoa, whoa. One moment. Just got this news right before the program began. It’s a Breitbart story, and it goes hand in hand with my opening question: I wonder how many new Republicans were created by yesterday’s Fourth of July.

Here’s the headline: “Young White Men Abandon Democrats, Flock to Trump’s Economic Nationalism.” Now, this shouldn’t be any kind of surprise, but I’ll guarantee you — this story just cleared minutes ago. If it reaches the mainstream — and because it’s Breitbart, they may ignore it — but if it does, you can automatically predict how it’s gonna be portrayed. “Racism, racism, Trump promotes racism.”

In fact, CNN, I don’t know what was actually being discussed because I just saw a screenshot of CNN today where they had their anchorette, Alisyn Camerota, was talking to somebody, the chyron graphic, the headline at the bottom: “Is President Trump racist?” Just absurd. It’s beneath everybody. It’s just absolute intellectual laziness. And they’re just trying to, I don’t know, titillate the resistance base that they have as viewers. But it’s absolutely absurd.

Nobody accused Trump of being a racist before he ever ran for office. The same thing with me. Nobody ever accused me of it until six months, maybe less, after this program began.

RUSH: To the audio sound bites. I mentioned earlier that the program the day before the Fourth of July here hosted by me ended up being called divisive on certain cable news networks. And just to retrace, to put this all in context, I began all of my comments on the Fourth of July by citing a 2011 survey from Harvard of tens of thousands of people, and it proved that flying the flag and parades and so forth on the Fourth of July ended up moving people toward the Republican Party.

Now, this is 2011. You know, this is in the midst of the Obama administration, not the Bush administration. This is the Obama first term. It was an independent survey, and it just happened to catch my attention ’cause I thought it was probably valid.

Then after mentioning that, reminding everybody of that, I led into things that you could do on the Fourth of July because we had surveys from all over the country where more and more Democrats were admitting that they are not proud to be American, that they’re miserable and that they’re embarrassed and so forth and they’re not proud of their country.

So I said go out and have everything you normally do on Fourth of July accompanied by something patriotic — fly the flag, attend a parade, the barbecues, make sure the flags are there, the red, white, blue colors and so forth. And that became fodder for much of cable news. We start with CNN yesterday, Inside Politics, John King talking about patriotism on the Fourth of July and me.

KING: Views of the president impact views of just about everything else, including whether you’re proud to be an American. Now, on this debate, Democrats would say, maybe I’m less proud this year because I don’t like Donald Trump. Rush Limbaugh would say the Democrats are the problem here. 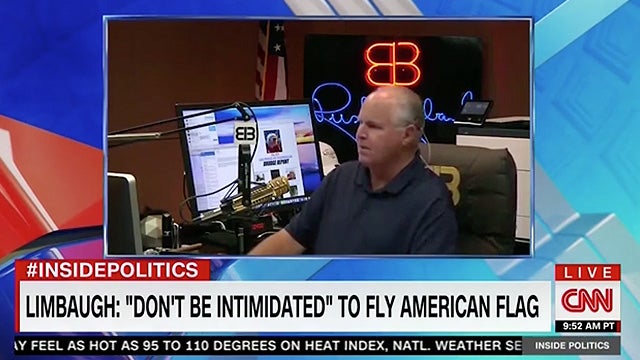 RUSH ARCHIVE: Be American. Go out and just do what you would normally be inclined to do, but don’t be intimated into flying the flag. Don’t be intimidated by any patriotic activity. Whatever it is, guilt or hatred, there is a rising percentage of the Democrat Party that simply doesn’t like this country and does not think America should remain American.

KING: Even the Fourth of July is subject to our polarization. Really? 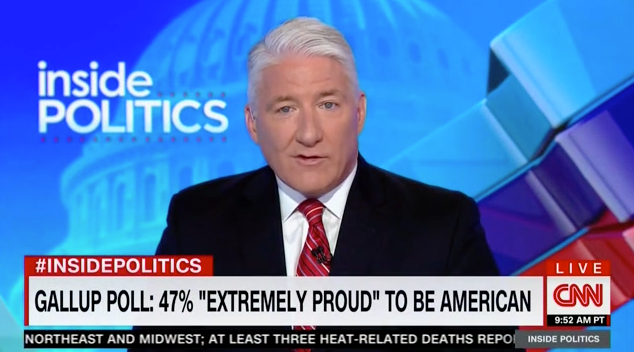 RUSH: So I’m starting divisiveness here on the Fourth of July? I didn’t start any of this. It’s the Democrats on the day before the Fourth of July. You saw the news. We talked about it. All these people claiming they didn’t like America, they’re not proud of America. Drudge still has it up there. Record low, extremely proud to be Americans. Record low number of Democrats. And it’s not exclusively tied to Trump.

And I’ll tell you this, by the way. When Obama was president, I didn’t have any negative feelings about America. When Bill Clinton was president, you would have never caught me in a survey saying that I’m embarrassed to be an American or that I liked my country less. Just the exact opposite. I think it’s a phony, fraudulent, basically shallow excuse for a bunch of Democrats to say that they are embarrassed or they have lost a lot of pride, they’re extremely disappointed to be Americans.

That’s not all Trump! And my line about “let America be America, what’s wrong with America remaining America,” let’s all call a spade a spade here. The open borders movement exists explicitly to transform this country. It exists to make sure that America does not remain America. But I would never offer as an excuse, “Well, yeah. I’m really not proud of my country today. Barack Obama is president.”

We move over to the Fox News Channel and yesterday’s edition of Fox & Friends. Abby Huntsman was cohosting, and she introduced and played a clip of me talking about patriotism on the Fourth of July. And you’ll also hear a cohost by the name of Todd Piro occasionally weigh in here.

HUNTSMAN: Rush Limbaugh, if you were listening to him, he gave some advice on how you should celebrate Independence Day. He says “be as American as you can be.” 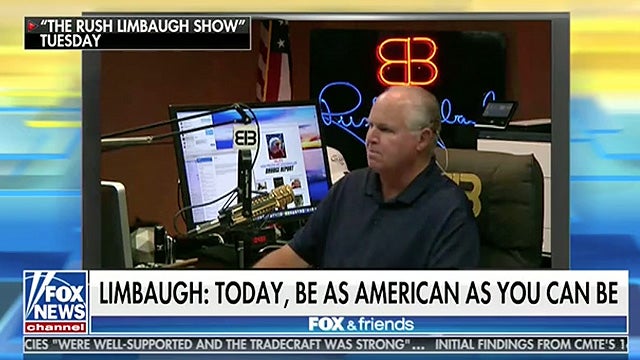 RUSH ARCHIVE: Be American. Go out and just do what you would normally be inclined to do, but doesn’t be intimidated into flying the flag. Don’t be intimidated by any patriotic activity, because you never know the impact it’s gonna have on people. This whole immigration battle, open borders, no borders, is about changing or erasing America as is. And the battle is between those who want America to remain America and those who don’t.

RUSH: And Pete Hegseth was next to weigh in. 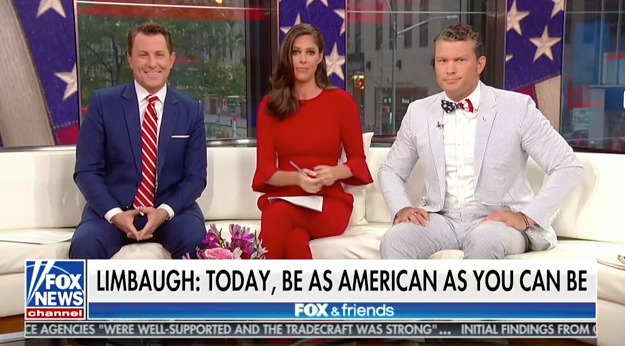 HEGSETH: His point is a deeper one than just wear a bunch of red, white, and blue. It’s sort of what the president has said for a long time: Patriotism in America should unite us. The values that we believe in that are enshrined in that Declaration of Independence are what has made America special. Let’s not forget them and get rid of them. Let’s reinforce them and remind and teach.

RUSH: Yeah. Well, Facebook ended up removing part of the Declaration of Independence, an excerpt, over the holiday, claiming that it was hate speech. You heard about this? Facebook claimed that a part of the Declaration is hate speech, and they removed it. Now, they’ve since put it back and apologized, having been told that they were wrong in determining what they thought was hate speech. We’ll get to that here in just a second.

HUNTSMAN: It’s been such a divisive and hateful time. And you think we hear the Fourth of July above everything else, we are all Americans. And how often we forget that. Right? We are all here fighting for the same cause. Right? Fighting for our freedom. So that is what we need to celebrate today. And as Rush Limbaugh said, don’t be ashamed, put out those American flags.

I wouldn’t go so far as to say that, but I’m just telling you some people do. But we’re all not fighting for the same cause. We are fighting for many different causes. And we’re up against a group of people that really don’t think our way of thinking should be tolerated and it should not have a place. Freedom? We’re up against a bunch of Stalinists and fascists, folks. That’s why the battle is so paramount, it’s epic, and it is important.