Caller: Get Us Out of the U.N. and Millennials Will Follow

RUSH: Jay in Arlington, Washington. It’s great to have you, sir. You’re next.

CALLER: Now that we have the greatest negotiator in the world negotiating for America, isn’t it time for us to get out of the United Nations and let him renegotiate the deal?

RUSH: Interesting proposition. I have not heard the president allude to such a desire. Do you think that he’s thinking along these lines?

CALLER: I don’t know what he’s thinking. All I know is I trust him almost implicitly because of what I see happening in America. Everybody’s worried about the Millennials. You wouldn’t believe how many Millennials have an American flag on their car. They got funny earrings and piercings everywhere and tattoos, and they’re Americans! They believe in this country.

RUSH: You know what else about Millennials? More and more of ’em are leaving home now. They’re finding work. I mean, not all of them. Some of them are still mama’s boys and girls, but many of ’em are getting out of the house. They’re striking out on their own because the economy is booming.

CALLER: I see signs everywhere, Rush. Trump, commercial vehicles alongside the freeway. Every business has a hiring sign. Everybody! It’s ridiculous what’s happening in America. It’s a job opportunity that’s come about because we have someone in the White House what really cares about this country.

RUSH: Right, and it’s happened in a year and a half!

RUSH: We’re not even two years into the regime!

CALLER: I mean, Donald J. Trump could be Founding Father material. I’m sorry, but I believe that totally.

RUSH: Wow, you’re all-in. There’s no doubt about that.

CALLER: Well, I’m a descendant of Founding Fathers — a long time, way down the line. But I believe in this country so much. (choking up) Here I go again. I’m sitting in a truck stop, and there goes two trucks with American flags on their antenna. I’ve never seen that in the last 12, 15, 25 years.

RUSH: That long it’s been, 25 years since you’ve seen this kind of patriotism on display? 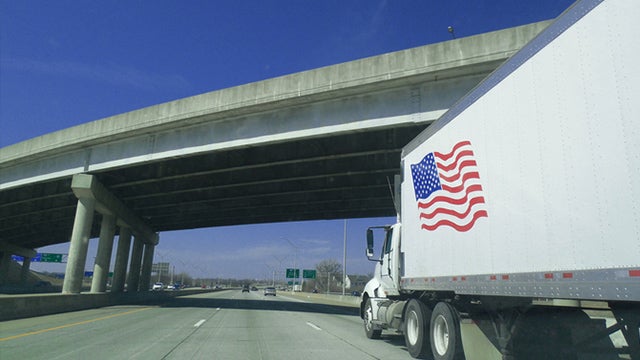 CALLER: Once in a great while you’ll see, you know, a vet or something and he’s got a big display. But I mean everybody… I even see people, you know, that are definitely foreigners have American flags on their vehicles.

RUSH: You attribute this to Trump?

CALLER: I have to! What else? People are starting to be proud of this country, which they should be. Where would the world be, Rush, without America?

RUSH: So I checked the email during the break and I got a couple in there saying, “Rush, your caller at the truck stop is wrong! Millennials aren’t wearing flags. They’re not displaying flags anywhere. Millennials don’t care.” So I mentioned this to the to staff. “That’s not right. I saw a truck go by today and it had big flag on it. Fourth of July? You should have seen all the Millennials dressed up as Uncle Sam and Betsy Ross. I saw it, Rush.” So I got conflicting data here as to how patriotic Millennials are.

I don’t want to jump the gun on some things here, but look, folks, reality is reality; performance is performance — and, eventually, the unavoidable does get noticed. It just takes some time. We’re up against a whole bunch of brainwashing, years and years and years of propagandizing, daily lying and misdirection by the Drive-By Media. But I think things are progressing in a positive direction much quicker than I thought they would — and I don’t mean just the achievements that Trump is racking up, but rather the public perception of it as well.